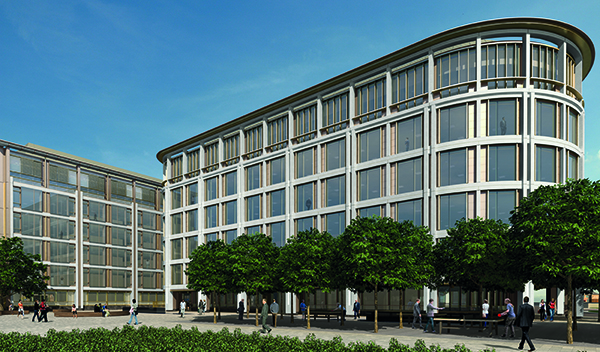 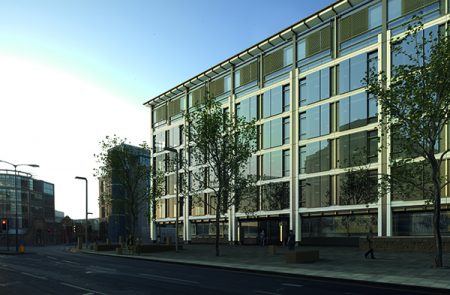 Currently under construction is one phase of the much anticipated St Helier Esplanade Quarter that will be a dynamic new civic business environment built by the Jersey Development Company. This will effectively be seen as an extension to the adjacent Central Business District located in Saint Helier, Jersey within the Channel Islands.

The International Finance Centre (IFC) project is housed on the site of a previous surface car park, includes plans for a total of six stand-alone office buildings as well as work on the new civic landscaped areas that will surround them. “The buildings will have four sides of predominately glazed façades that will give excellent levels of natural light,” commented Lee Henry, Managing Director at Jersey Development Company (JDC).

JDC, commissioned MJP Architects to design the new offices, whilst Waterman provided full Engineering Consultancy services for the project.  Local building contractor, Camerons is undertaking the build of No4 IFC, which began in June 2015 and has a practical completion date of February 2017. Another building, No5 IFC, has been given planning permission and will mark the second phase of the project which is hoped to start this year.

“We only commence each building’s construction once we’ve secured a sufficient level of pre-let,” added Lee. This first building is now around 60% let and they have a number of enquiries for the remaining space.

“We’re starting in the north-east corner of the site, on the corner of Castle Street, and will be making our way west on the site,” Lee commented. The development is only a short walk from the main public transport hub allowing easy access.

No4 IFC is a Grade A, six storey structure and will be built to a BREEAM excellent environmental rating and will have approximately 68,000ft2 of net internal area with each floor around 12,000ft2 which can be subdivided into four 3,000ft2 office suites.

The design of the building was done in a way that meant the floor plates themselves are column free. “We have between 9.5 and 12 metres spans around a central core delivering a column free space that provides the occupier complete flexibility in their fit outs as well as very efficient layouts for their floors,” added Lee. It will be delivered to a CAT A specification with raised access flooring, lighting and air-conditioning allowing tenants to fit out space for their own requirements. 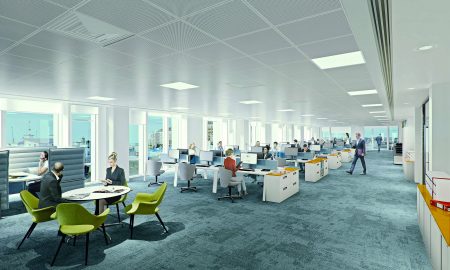 All of the buildings within the IFC will have granite paved areas around them where semi-mature trees will be planted in the landscaped area. The land the offices are on was reclaimed in the 1980s and still has the original seawall. “Certain sections of the seawall will be opened up to allow permeability, allowing people to cross the seawall into a three-metre-wide colonnade running around the north and east side of the building,” commented Lee. No4 IFC, will feature a main reception area which will have a concierge on the desk and a lift lobby with three 17 person lifts. There will also be a full back up emergency power generator that will provide occupiers with uninterrupted supplies in the event of a power outage.

As it was a surface car park, JDC had to re-provide those public parking spaces, so in a latter phase a new underground public car park of around 520 spaces will be built.

On such a large and unique project there were challenges that JDC had to face such as the strong opposition to the build from the local community which was responded to. The land itself that was reclaimed in the 1980s contains contaminated material. “We had to carry out extensive site investigations and very carefully and methodically removed material from the site under strict environmental risk mitigation measures,” added Lee.

“We have received excellent feedback from prospective tenants that have viewed the space in terms of overall quality, natural light, flexibility and efficiency. I think the end result of the building will be seen as very positive. And thanks to our fantastic design team and excellent contractor the project is on schedule for completion early next year.”