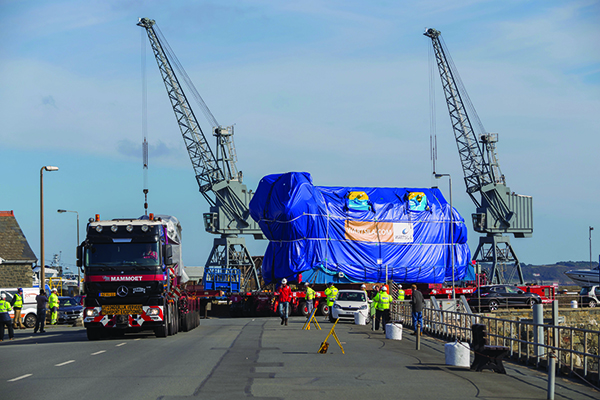 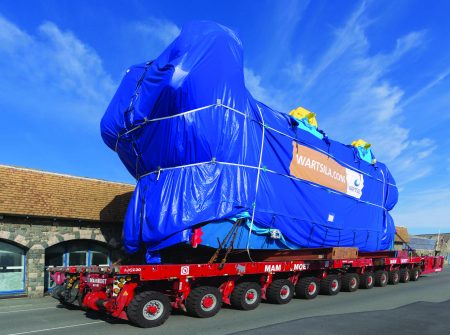 Engine 3D, Guernsey Electricity’s newest generator has been delivered to the Power Station

Faster, quieter and more efficient than older models, a new £15m diesel engine, known as 3D, is being installed at Guernsey Electricity’s ‘D’ station at the island’s power station on Northside.

The medium-speed diesel engine is exactly the same specification as the 2D engine which it sits alongside, and was installed at the power station in 2012.

Energy company Wartsila (who also installed 2D), are responsible for the installation and commissioning of the 16.8 Megawatt 3D engine, which weighs 376 tons. These machines are the largest ever to be brought ashore.

When 2D was commissioned, the engine bed – the concrete base which the engine sits on – was built large enough to hold two medium-speed engines.

This was done deliberately as Guernsey Electricity’s long term plan has always been to retire their older slow-speed diesel engines and replace them with quieter, more efficient engines that can also start up and be operational more quickly.

This is essential to allow the power station to act as an effective back-up to the island’s submarine cable connection to the European grid. The newer engines also reduce the impact of the power station on residential neighbours as D-Station has undergone a series of noise reducing enhancements.

Dutch company Mammoet, who also transported 2D, brought the engine to Guernsey and offloaded 3D at St Sampson’s Harbour before it was transported to the power station.

Bringing ashore a 300 ton engine and 75 ton alternator, which is 18m long, four metres wide and six metres high, was logistically very challenging. Once ashore the engine needed to be moved along Northside and up the Hougue Jehannet and finally into ‘D’ station.

There was very little room for error and, based on the success of the installation of the islands 2D engine in 2012, the same plan was followed.

“This element of the project was a significant logistical challenge and a complicated operation” said Stuart Blondel, Head of Asset Management at Guernsey Electricity.

He added: “The engine arrived by a special barge with an elevating platform and was offloaded onto the harbour quay then delivered to the power station on a multi-axled transportation system.

“Very careful planning has been required to integrate the engine into the existing systems at the power station, including all the associated pipework, cabling, control systems and exhaust ducting.

“We do have windows of opportunity to shut down generators in ‘D’ station to allow this integration work to take place, because we have alternative sources of power on the island, as well as imported power from our submarine cable connection.

“The purpose of the installation of these new generators is to replace our older fleet of generators which have provided a good service to the island for several decades. They provide power supply security to the island in the event of interruptions to our imported energy supplies and form part of our long term infrastructure plan.”

The installation of 2D and 3D is part of a much-wider investment in Guernsey Electricity’s infrastructure to ensure that the company fulfils their responsibility to the island to provide a secure and reliable electricity supply.

Guernsey Electricity chief executive Alan Bates said: “This is another significant step forward in Guernsey Electricity’s long-term investment plans, as we have a commitment to the local community to provide them with security of supply.

“The capacity and reliability of our cable links to France are being strengthened with the installation of Normandie 1, and our aim is that 2D and 3D will therefore provide us with an effective back-up which can be operational far quicker whilst also being quieter, more efficient and producing fewer emissions compared to the older engines which we are slowly replacing.”

Stuart Blondel concluded: “We are happy with the way the project is going and despite a brief spell of unfavourable weather at the time of delivery, everything remains on track. Wartsila did a good job on the installation of the 2D engine and we are confident in their abilities to deliver a successful outcome.”