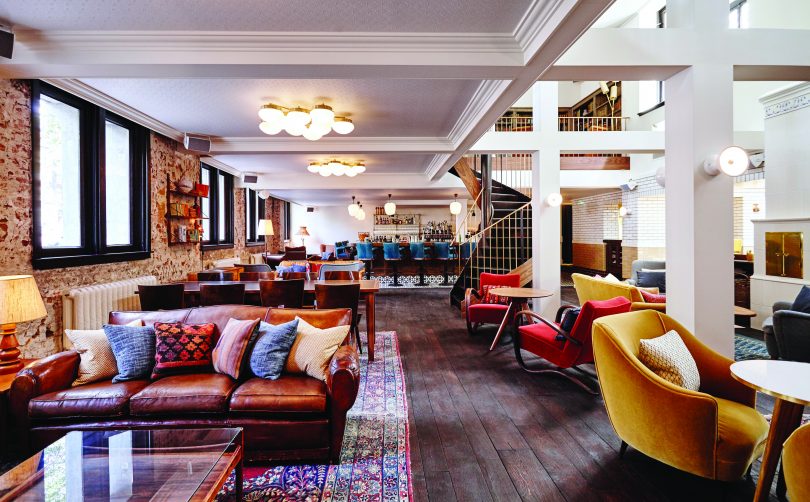 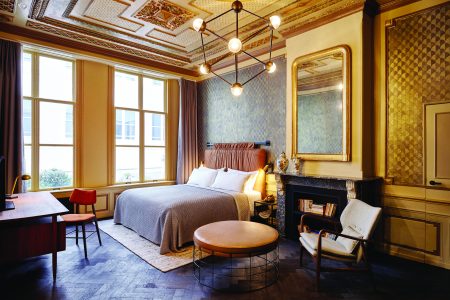 International hotel chain The Hoxton has come a long way since opening its first property in London’s Shoreditch in 2006. A second London location in Holborn opened in 2014 before the group turned its attention to potential overseas sites. Eventually settling on mainland Europe, The Hoxton, Amsterdam opened in summer 2015. The hotel was quick to make a mark and recently added to an already burgeoning reputation with a European Hotel Design Award nomination in the ‘Renovation & Restoration’ category.

Occupying a building that dates back to the 17th century, which sits on the banks of the Herengracht  and was once home to the Mayor, The Hoxton turned to local knowledge when choosing architects and designers to work on the renovation. Kentie en Partners Architekten BV were one such local company who worked on the development. Marlies de Boer, partner at the firm, spoke to Premier Hospitality about the project:

“We work on a lot of hotels in Amsterdam. I believe the people behind The Hoxton had been asking around to find out which architects they should be looking to use if they were going to do something in Amsterdam with an existing building. Most of our work involves redeveloping monumental buildings and somebody mentioned our name to The Hoxton, they gave us a call and we took it from there.

“The brief that we were given was very open. The fact it was an existing hotel meant there was space for 111 rooms and building regulations in Amsterdam mean that you cannot add additional rooms. However, The Hoxton did not have any requirement for a specific number of rooms so we just decided to try and fit in 111 even though we took more space for public areas.

“The brief for the public areas was also very loose as we were told to do whatever we thought would work. They didn’t want it to feel like a hotel but instead feel like a home away from home. We like this sort of freedom because it means we can really look at what works for the building and the hotel.”

For a large scale project that required the negotiation of various building permits and regulations, the timescale was relatively short. Sketches were initially made at the end of 2013, with construction beginning in the following year and completed in time for the July 2015 opening.

Taken as a whole, the entire hotel consists of five buildings. There is one very large canal house on the Herengracht, which is a monument, and four more canal houses. Of these four, three are monuments. Kentie decided to try and maintain the same corridor layout on the guestroom floors of the previous hotel where possible but demolished the entire interior and designed it again from scratch with the help of interior designers Nicemakers. Marlies explained:

“We did change the layout of the basement and ground floor in a significant way. In the beginning when you entered, you immediately had to take stairs to the ground floor, where you could find a small reception area. We pushed the stairs back so now you enter into the basement which we opened up, introducing a lot of daylight by putting in a retractable glass roof and by making big voids connecting the basement with the ground floor.

“Now it is quite a large space, feels less like a traditional hotel and is more of a vibrant ‘living room’ for the city. You can see the restaurant and bar while the reception desk is tucked away so it is not the first thing you will see.” 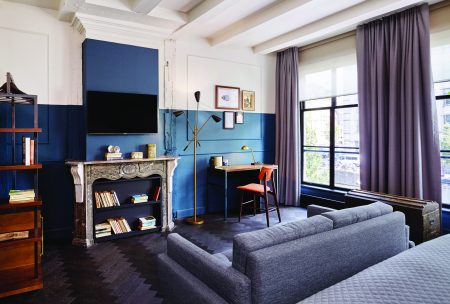 Rooms at the hotel fall into a variety of categories covering a plethora of shapes and sizes. At 28m2, ‘Roomy rooms’ are the largest on offer and are ideal for longer stays exploring beautiful Amsterdam. At the opposite end of the spectrum you have ‘Shoebox rooms’ at 17m2 perfect for those travelling solo. Rooms are bathed in natural light and defined by high ceilings, double showers, stunning views and classic Hoxton perks.  Such perks include free Wi-Fi, one hour of free international calls, free fresh milk and water as well as a free light breakfast bag filled with snacks from a local deli to start the day off right.

The company behind the design of the rooms, Nicemakers, was just one of a number of Dutch-based companies used on the project.

Van den Dongen Parket, for example, was responsible for providing and laying all wooden floors throughout the entire hotel. The project included several unique floors, each with their own specific character. In each of the 111 guestrooms you will find aged wooden fishbone parquet whilst the restaurant has a burnt oak floor and the meeting rooms have white chalked oak plank flooring. Owner Bart Van den Dongen commented:

“The Hoxton Amsterdam is in a renowned location in the ‘canal belt’ of Amsterdam. We are very proud of the trust placed in us for this prominent project and it is a great reference to use with other clients.”

While the hotel prides itself on the variety of rooms available and the guest experience they provide, its additional facilities have proved incredibly popular with people not looking for a place to stay. Lotti’s Diner, the hotel’s all-day restaurant caters to a number of tastes serving grilled meats, seafood, pasta and small plates. With lush velvet sofas and chairs plus a retractable glass roof, the space has proved incredibly popular with those looking for a relaxing space to work during the day and hang out with friends in the evening. Local DJ’s are given a chance to showcase their talent four nights a week.

As is the case with all Hoxton hotels, The Amsterdam offers unique meeting space in the form of ‘The Apartment’. Innovative and centrally located, The Apartment features four separate, individually designed rooms to suit varying needs. Presentations, networking sessions and small private meetings are all catered for with free Wi-Fi and printing, LED TV screens, flip charts and a mixture of drinks and homemade snacks. The Apartment also includes an outdoor courtyard with greenery, colourful tiles and wood decking. As Marlies explained, this space led to one of the few challenges on the project:

“There were not that many challenges on this project. Of course because it was an existing building, once you start you always discover things that are a bit different than you expected, but you make it work. Also, there is an area in the basement which we designed as a meetings and events space around a courtyard. We wanted to put a glass roof over the courtyard so it would become one area and you could move from one area to the other without having to go outside. Unfortunately, the zoning plans from the city dictated that it had to stay open.” 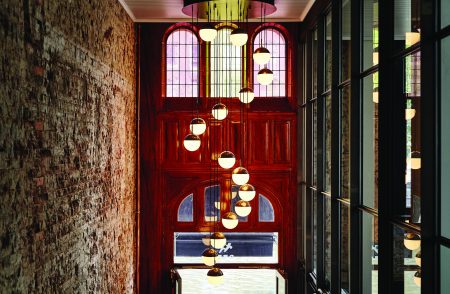 With some of the best museums in the world, stunning architecture and charming restaurants, Amsterdam is a perfect weekend getaway. Centrally located, The Hoxton is a great base from which to explore the city. Just out of the front entrance is one the nicest canal’s to take a stroll along with the Royal Palace just five minutes away.

Reviews from critics and guests alike have been extremely positive, justifying the decision to branch out into Europe. The European Hotel Design Award nomination is reward for a novel approach to the redesign and the hard work that has clearly been put in. Marlies added:

“It is very nice to be nominated for the award because we work on a lot of high end hotels, mainly in Amsterdam but also outside. Most of them do get recognition but it is flattering that this is international recognition. The original hotel was not very nice. The way it looks now it such a change, it’s great to see that it works for the entire neighbourhood as we envisioned. It is always very busy, even if it is just people coming in for a drink. We’re happy to be able to show our abilities.”

The Hoxton brand is built around being able to offer more than just a bed for the night at an affordable price. The first hotel in Shoreditch was established with the aim of proving style did not need to be sacrificed for value. Each site has become more than a relaxing place to stay. Monthly events with local creatives, for example, are organised at each location as part of the Hoxtown programme. Following on from the undoubted success of the Amsterdam opening, two further hotels are set to open at properties in New York and Paris in 2017.