Croxted Road – A welcome new addition to the community 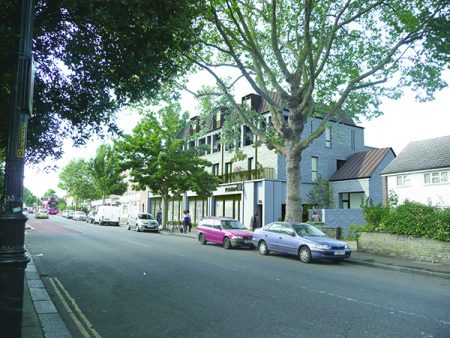 The new building is located on the former Unigate Dairy site, which had not been operational for many years, and the now demolished buildings at 13-19 Croxted Road were disused and had become beyond economic repair.

Dulwich Estate is therefore bringing the site the site back into productive use and enhancing the Croxted Road street scene in order to make a positive contribution to the locality. Durtnell & Sons Ltd are main contractors for the project, with Synergy Construction & Property Consultants LLP as project managers and quantity surveyors, working with The Dulwich Estates architects Panter Hudspith. The retail units are to be located on the ground floor, together with the state-of-the-art medical practice for the relocated Rosendale Surgery alongside, and the three upper floors will be occupied by the apartments. The project commenced on site in January 2016 after receiving planning permission in 20145. The surgery and one retail unit is due to be completed in spring, followed by the remaining retail units and apartments in summer 2017.

Andrew Henson, project manager at Synergy LLP said: “The brownfield site is surrounded by other properties including housing and shops, which presented a significant challenge during the project’s demolition phase and the piling works, with communication with all those concerned being key. Site access whilst undertaking the demolition was also one of the biggest constraints.

“The dairy site had remained unused for over 10about five years, so the project will be good for the local community, who will also benefit from enhanced medical facilities with the new surgery. The project is also important in that it will provide additional shops and housing in the area,” concluded Andrew Henson.

The Dulwich Estate registered charity, known as such since 1995, is the modern incarnation of the foundation called Alleyn’s College of God’s Gift at Dulwich, established in 1619 by Edward Alleyn, a successful actor (a contemporary of Shakespeare) and entrepreneur. Alleyn bought the Manor of Dulwich in 1605 and under letters patent granted by King James 1, established his College in Dulwich to endure forever.

The charity was founded for the purposes of educating poor scholars and providing accommodation for poor persons. These basic principles still exist today, but on a much wider scale, embracing among the beneficiaries Dulwich College, James Allen’s Girls School, Alleyn’s School, The Central Foundation Schools, and St. Saviour’s & St. Olave’s Schools (Boys and Girls) and also the Dulwich Picture Gallery and Christ’s Chapel.

In 1995 a major reorganisation of the historic Alleyn’s College charity resulted in the reconstitution of The Dulwich Estate as an independent registered charity, and the other former constituents also became independent.

The ‘Estate’ comprising some 1,500 acres (6.1 km2) is bounded by Crystal Palace to the south, Denmark Hill to the north, part of Lordship Lane to the East, and Tulse Hill to the west. It is primarily situated in the inner London borough of Southwark, with small parts in Lambeth and Lewisham, but has large areas of open space.