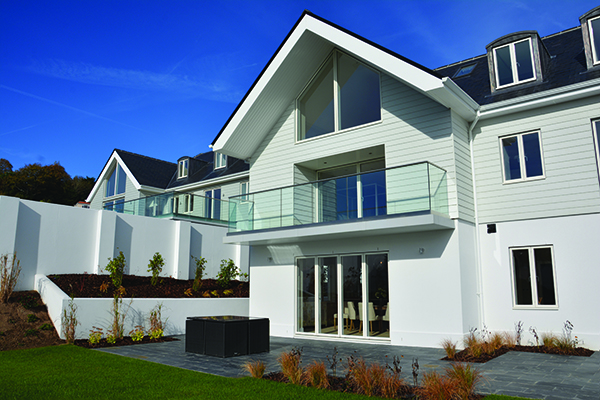 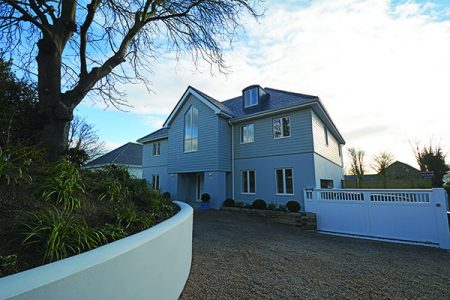 A luxury development has been built in Jersey, Channel Islands this year by Skyway Developments. Work began on the houses in January 2014 and completed in January 2016.

Fort View and Vine House, were constructed by Skyway Developments with the interior architecture and design completed by Skyway Interiors, a bespoke interior design consultancy. “The houses were based on the New England style,” commented Emily Bell, founder of Skyway Interiors and the Interior Project Manager of the development. “I love the style of houses in Nantucket and on the East Coast of America. So we chose a contemporary take on New England.”

Located near the Parish of St Aubin, both houses have uninterrupted  sea views which are enhanced by the large windows. The two houses both feature a total of nine rooms with five bedrooms which are perfect for a family.

Fort View, which is 4,500ft2, and Vine House, which is 4,000ft2, were both designed with large-scale proportions in order to create a much more spacious living space than traditional UK homes. “We’ve spent a lot of time in America and so wanted to bring the feeling of space and scale, to the staircases, dressing rooms and bathrooms,” commented Emily. One of the main aspects of the houses that was focused on was storage, “we made sure we had big hallways and lots of storage cupboards as you can never have enough storage.”

Both houses were created with similar interiors, in keeping with the style of Skyway Interiors. “I was conscious not to make it too personal but I wanted it to look like an interior designer had really thought about the design of the houses,” commented Emily. Hardwood flooring features throughout the houses with luxury wool carpets in the bedrooms. Staircases are traditional with wide steps and a dark oak banister which is inspired by the New England style houses found in the couples’ travels. Each of the five bedrooms has an en-suite bathroom and dressing room. Within the bathrooms, Italian porcelain tiles, mother of pearl and Carrara marble are featured. 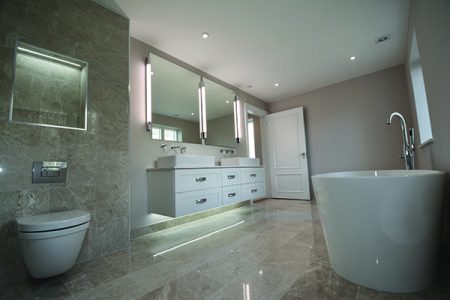 The Master bedroom has a lovely double vaulted ceiling with large, high windows to capture the views of St Aubins Bay.

Powder coated aluminium windows are used in both houses and were supplied by Velfac.

The exterior of the houses feature horizontal weatherboarding in order to continue the classic New England design. Built with natural slate roofs, each house features balconies with aluminium handrails that look out onto the back garden. Alasdair Gordon-Hall garden design worked with Emily to create the beautiful garden landscape that surrounds each property. “We chose a very New England style of planting with lots of hydrangeas and we went with pleach trees as we wanted it to be very low maintenance. People don’t want a lot of maintenance with the garden but still want it to look pretty so we were conscious of that in our designs,” added Emily. There is also outside lighting throughout as well as a large patio area with natural slate paving outside. A granite drive with a gated entrance leads to the front of each property and their garages whose doors were supplied by Island Access.

As it was the first joint project for the couple, there were some challenges when it came to building the two houses. “Like any building project, the main challenge we faced was to make sure that everyone was on the same page in terms of following the plans. We wanted to make sure we were bringing something fresh and different to Jersey and we spent a lot of time making sure we were producing something unique.”