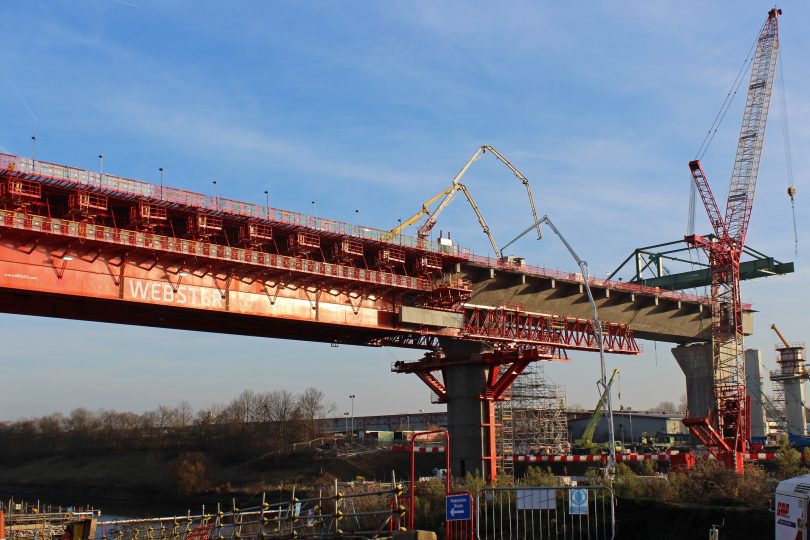 The Mersey Gateway’s giant bridge-building machine ‘Webster’ has built the section of the approach road in Runcorn that will take traffic across the Manchester Ship Canal and onto the new bridge. The Mersey Gateway Project will be one of the largest infrastructure initiatives in the UK over the coming years. The project has been identified as one of the UK government’s Top 40 priority projects in the National Infrastructure Plan and it has been recognised by KPMG as one of the ‘Top 100 infrastructure projects around the globe’.

Its features will include:

Construction teams cast the second span of the south elevated approach viaduct this week, 25 metres high above the ship canal. This involved pouring around 160 truckloads of concrete into the 1,155 cubic metre mould over a 24-hour period.

The Movable Scaffolding System (MSS) will cast eight reinforced concrete spans in total to create the central section of the approach road.

Marc Heaps, Merseylink’s Operations Manager for the approach viaducts, said: “This was one of the more challenging pours on the project as working above the ship canal required extra planning and a change in logistics. We couldn’t place the concrete pumps underneath the machine or they’d have been under water. Instead we used additional pumps on top to give us access to the concrete.”

Webster measures 157m long – the length of around one and a half football pitches – 8m high and 22m across at its widest point. And at 1,700 tonnes, the steel structure weighs as much as 140 double decker buses.

The machine was named by Halton schoolchildren after local engineer John James Webster who built the Widnes Transporter Bridge.

Webster is accompanied on site by a wing traveller machine, which will build the outer lanes of the approach road to create the full six-lane width. The 280-tonne machine was recently lifted into place using the UK’s largest crane boom.

Once complete the south approach viaduct will link the main road network in Runcorn to the new Mersey Gateway bridge, improving connections locally and across the wider region.

You can find out more about the project at here