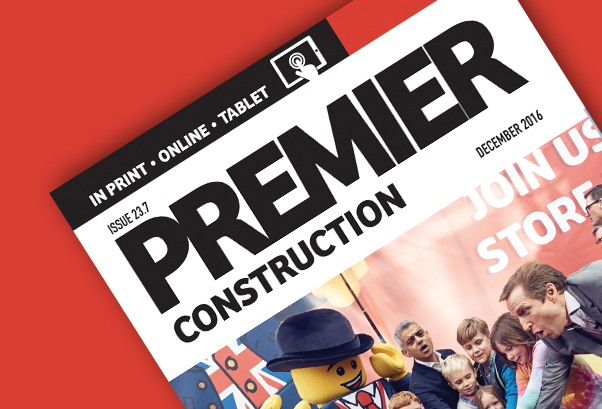 This Month in Premier Construction 23.7

In this month’s edition, we take a look at the new transport hub which is being built at Workington Railway Station; we tuck into Wahaca Edinburgh; and we unveil London’s fantastic new LEGO store – LEGO Leicester Square.

Designed to encourage people to use public transport, reduce traffic congestion and create a more attractive approach to the town, a multi-million pound new transport hub is under construction at Workington Railway Station. The site covers an area of land approximately 1.0Ha. between the Cumbrian Coast Railway Line and A597 immediately east and south of Workington Railway Station in Belle Isle Place. Works on the £3.08m project include the demolition of existing buildings, a redundant rail platform and minor structures and the construction of a 143 space car park with new road access off the A597.

Meanwhile, born from a love of fresh, honest Mexican market food Wahaca has opened its new site in Edinburgh. After falling in love with the vibrancy and freshness of real Mexican food, Master Chef Winner Thomasina Miers and Mark Selby co-founded Wahaca. The restaurant chain is inspired by the cantinas found in the street markets within Mexico and this honest approach to food drove the pair to open up the first Wahaca site. After numerous successful years, the duo opened this new restaurant in Edinburgh this October.

And finally, The LEGO Group, one of the world’s leading manufacturers of play materials, has officially opened its new UK flagship store in central London’s popular tourist hot-spot, Leicester Square.  The Leicester Square store is the 131st LEGO store globally and is pushing the boundaries with many unique LEGO® firsts. The largest LEGO store in the world boasts exciting new experiences, including the ‘Mosaic Maker’ which offers LEGO fans of all ages the opportunity to purchase their very own, one of a kind, personalised LEGO mosaic portrait.