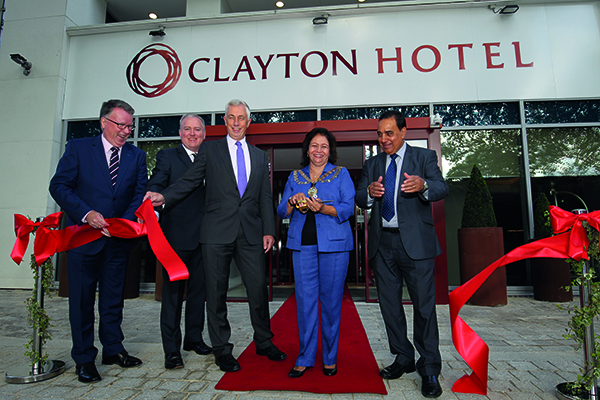 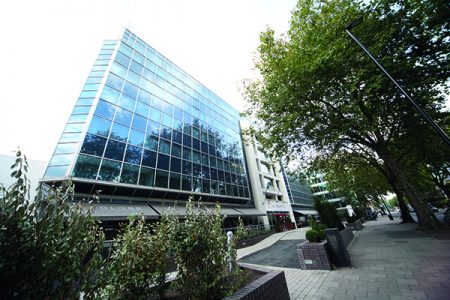 The Clayton Hotel brand is a part of the Dalata Hotel Group and was launched in 2015 consisting of 13 properties across the UK and Ireland. Offering luxury accommodation at multiple city and airport locations, including Dublin, Belfast, Cork, Galway, Wexford, London, Leeds, Manchester and Cardiff, the hotels are perfect places to stay.  Dalata Hotel Group is Ireland’s largest hotel operator with a portfolio of 40 three and four star hotels.

Formerly the Chiswick Moran Hotel, the four-star Clayton Hotel Chiswick was bought by Dalata as part of a £324 million acquirement of nine hotels from Moran Bewley’s Hotel Group in February 2015.

The hotel is situated in the heart of Chiswick, West London and is only a short distance from many prominent landmarks and shopping areas within Central London, as well as a few minutes walk to Chiswick Business Park. Clayton Hotel Chiswick is also conveniently eight miles from Heathrow with Gunnersbury Station opposite the hotel.

Work to the Clayton Hotel Chiswick began in 2014 and was completed in just two years with the grand opening at a ribbon-cutting ceremony and celebratory lunch held in its glittering Chiswick Ballroom on 10th October. Alan McClure, Co-Director and Designer at the Glasgow-based interior design practice Cunningham McLean, worked to create the new warm and contemporary four-star ‘Clayton’ brand that will be the basis for new build and refurbishment projects that will be rolled out in the future.

“The whole Clayton concept was a new brand that Dalata Hotels wanted to bring out. We were brought in at the start to create a good quality, four-star hotel for corporate and leisure users,” commented Alan. “The colour palette was inspired by the bronze tones of the Clayton nest-like logo so there’s a lot of copper, burnt orange, grey oak, timbers and granites that we used. Dalata wanted something fairly classic and contemporary but for it to be a place people would feel comfortable in with a warm atmosphere.” 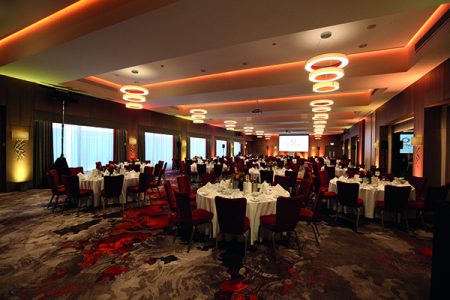 The 200m2 ground floor of the hotel has been redesigned and extended, along with the reception area, which now offers a welcoming bar, a premium coffee outlet, a revamped restaurant and lounge area perfect for guests that want to escape their rooms. As well as providing a variety of places to sit throughout this floor, the new design offers various degrees of privacy for guests to work and relax with super-fast broadband to connect to.

The reception area is one of the main changes made in order to create the warm and friendly feel that is a staple within the new Clayton Hotel brand. The reception desk has been positioned to one side rather than form a visual barrier at the hotel’s entrance. Beyond this are further seating areas that are separated by various lighting techniques as well as open-shelf room dividers including a private library that offers a comfortable area to relax.

“The bedrooms were the first area to be done and the rest of the hotel’s design stemmed from there. The same colour palette runs all the way through the hotel creating continuity from the bedrooms right through to the public areas such as the lobby.”

The hotel’s room capacity was expanded with a further 104 rooms and now boasts a total of 227 rooms. All existing rooms were refurbished with modern bathrooms, upgraded beds and stylish furniture following the hotel’s bronze and burnt orange colour scheme. With Deluxe, Executive and Family rooms as well as King Executive suites, guests have a variety of rooms to select from to suit any need. Bedrooms have the choice of one double, two twins or one double and one twin bed in order to cater to guests needs.

“The headboards are quite signature features as they are very tall with custom artwork that we had mad for them. The headboards feature a copper river running through which were made by Elegant Clutter who did all the artwork for the project,” added Alan.

The Meeting and Events space has been carefully designed to offer guests flexibility in terms of layout and style. Ranging from 26m² for more intimate gatherings to the grand Chiswick Ballroom at 250m² with its own bar and breakout area, the Clayton Hotel Chiswick is perfect for any occasion. The ten purpose-built meeting and function rooms each has adjustable settings and seating styles, light, sound and climate control, as well as the latest technology and AV equipment. 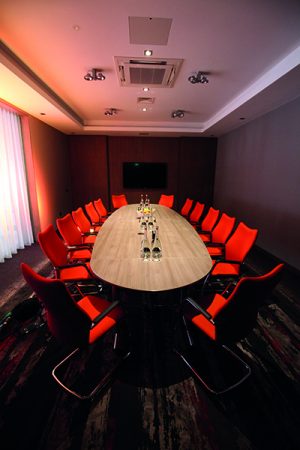 One of the other main changes with the hotel’s re-branding is the launch of the new Grill restaurant and Globe bar. “The restaurant and bar concept follows on from the bedroom and public areas, keeping the colour scheme. We added a deep teal colour to work with the copper of the bar counter and the cosmic black granite on the service counters in the restaurant. This was to distinguish the bar and restaurant from the bedrooms. The teal runs through a lot of the light fittings, bespoke carpets and upholstery,” added Alan. The restaurant is inspired by modern Californian cuisine whilst using the very best of British produce. Where possible the produce is locally sourced ensuring that dishes are the freshest and made with pride and passion. Both the à la carte and fixed price menus are available throughout the year and change frequently to reflect the availability of quality seasonal produce.

The Globe Bar, named after the huge shimmering globe that hangs between the bar and the lobby, serves bar food daily and includes sandwiches, salads and sharing platters. Offering an extensive variety of beverages including draft and craft beers, spirits, wines and cocktails, the bar seats up to 80 is perfect for meeting friends or popping in for a drink after work with colleagues.