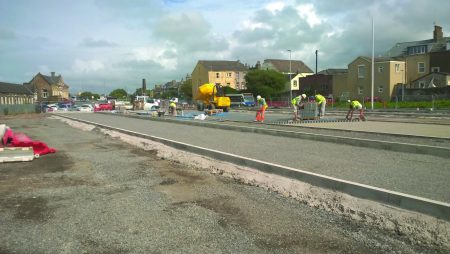 Geared to encouraging people to use public transport, reduce traffic congestion and create a more attractive approach to the town, a multi-million pound new transport hub is under construction at Workington Railway Station.

The site covers an area of land approximately 1.0Ha. between the Cumbrian Coast Railway Line and A597 immediately east and south of Workington Railway Station in Belle Isle Place.

Works on the £3.08m project funded by Cumbria Local Enterprise Partnership include the demolition of existing buildings, a redundant rail platform and minor structures and the construction of a 143 space car park with new road access off the A597. Other works comprise the creation of a new drop-off area, and the provision of disabled parking, motor cycle parking and cycle parking facilities.

The project is being delivered by Cumbria County Council on behalf of Cumbria Local Enterprise Partnership.

Designers for the project are Capita Property and Infrastructure, and main contractors are Story Contracting.

Drainage works are also involved, together with the construction of a pumping station.

In addition, new walling and fencing is being constructed, together with hard and soft landscaping and the installation of street lighting, road signs, street furniture and a bus shelter.

“In addition to improving transport facilities, encouraging the use of rail transport and promoting sustainable travel in West Cumbria, the aim of the scheme is to enhance the public realm at the gateway into Workington from the train station.

“One of the main tasks in the project was ground decontamination which was due to the presence of an old railway sidings on the site – so a significant amount of specialist disposal was required. Drainage works were another key element and included the construction of a surface water pumping station which will serve the new transport hub site, as well an adjacent site which is earmarked for future development.

“The car park is of standard asphalt construction with the parking bays being in block paving. The public realm area includes man-made paving, as well as paving in natural stone and granite steps. Brown porphyry paving will also be laid to give the effect of railway sleepers forming a track from the car park to the station entrance, to help guide pedestrians.

“This is further enhanced by the soft landscaping which includes the planting of shrubs, trees and grass verges.

“We also widened the main A597 to put in a right turn lane into a new junction and have provided a new access road to serve the car park – as well as the adjacent development site. Pedestrian and cycle links to the station have also been improved as well as the upgrading of street lighting and pedestrian crossing points – all with the aim of further improving access to the station.

“Currently the new car park is partially open, and the ground remediation work and pumping station are nearing completion. The remainder of the car park should be completed before Christmas and the work outside the station, together with the public realm works, are programmed for completion ready for opening in March 2017.”

“Workington Railway Station is an important transport hub and we have been able to contribute significant investment from our existing Growth Deal funding for greater capacity and accessibility.

“Improvements such as these to Cumbria’s transport infrastructure are essential to support business and stimulate the local economy and this project is aligned with our Infrastructure Plan which recommends improvements to key parts of our rail network.”