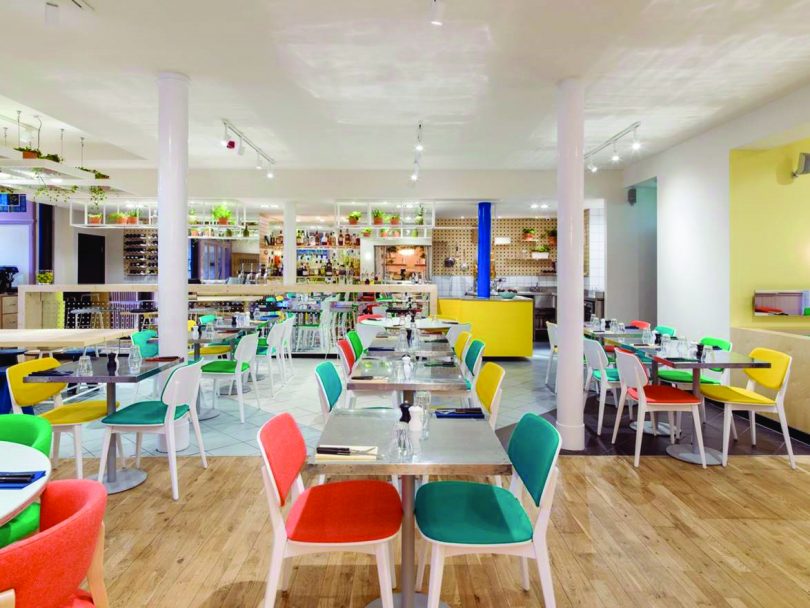 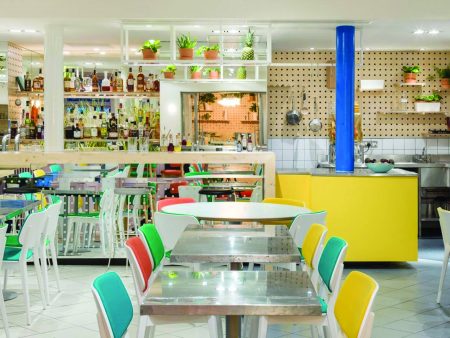 A new all day restaurant and bar inspired by the West Coast of America has opened in London’s Notting Hill. The 120 cover Pomona’s combines colourful interiors with an inventive food and drink menu.

Taking inspiration from David Hockney’s 1970s Malibu period, the interior has been designed by Dan Evans at Sundae Design Studio and fitted out by Interior Service. Peter Bramley, director at Interior Service, spoke to Premier Hospitality about the project and the scale of the work put in to redesign the space:

“We’ve worked alongside Dan Evans of Sundae Design Studio for over ten years on various projects in and around London. When the redevelopment of Pomona’s was conceived, we were offered the opportunity to tender for the project and were obviously successful.

“The site is a former bar and restaurant just outside of Notting Hill that last saw an update about eight to ten years ago and was starting to look a little dated. The concept was to attract a whole new customer base and the client wanted to achieve a lighter, airier and more modern look.

“There were minor modifications to back of house to increase the size of the existing kitchen, the customer toilets were completely redesigned and the bar / dining area was redeveloped because the old one was very dated. The interior décor had previously been a very dark stained oak so overall we’ve gone for much lighter colours.”

The space also includes a beautiful conservatory as well as a garden adding potential outdoor dining, with the hope that both will come into their own next year when spring comes around. With just ten weeks to complete the work, Pete and his team had a tight timeframe in which they had to transform the space. It was this that had a knock on effect on challenges that arose as Pete explained:

“Other than the timescale, the main challenge was the discovery of problems inherent with minor works projects. The fact is that some areas of the building are very old, so once we started stripping out we discovered all sorts of hidden problems such as uneven rotting floors and structural issues – all of which we had to accommodate without an increase in timescale.”

Customers at Pomona’s looking for a drink from the American Bar can expect a cutting-edge list of West Coast inspired beverages from Kestutis Stirba, former head bartender at Gordon Ramsey Restaurants and The Sanderson Hotel.

London-based Sundae Design Studio was founded by Dan Evans and Caroline Lundin in 2011. The company has worked on a number of innovative restaurant projects in that time as well as producing award-winning designs for large corporations such as Microsoft and Nokia.

For Pete the project provided the opportunity to work with a long term collaborator and transform a space that was dated. He added:

“Working on this project was important because we have a longstanding relationship with Sundae and we enjoy working with them. We’ve done a number of jobs with them over the years and it’s nice to see the transformation from a very dated space.”