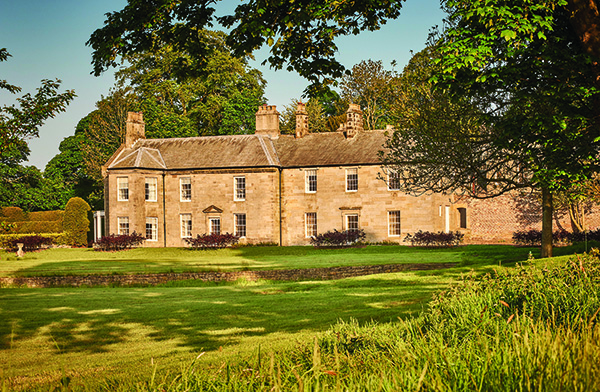 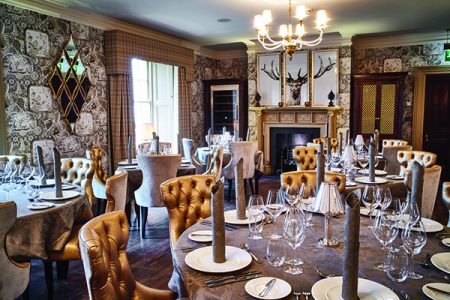 Opened in October 2016, Walwick Hall had previously spent 18 months undergoing a multi-million pound makeover. Located on Hadrian’s Wall, the Georgian property is a gateway to tranquil walks and fishing, complemented by a relaxing and warm interior design. Trevor Erskine-Meade, Director at Incognito Interiors, was responsible for this design and spoke to Premier Hospitality about his work on the project:

“I helped facilitate the sale of Walwick Hall to the current owners having worked for the previous owner on various projects.  The new owners were familiar with my work as I’m fortunate to have them as both friends and neighbours.  They kindly invited me to be involved with the project which I was happy to accept.”

“The property is a Georgian country house which had previously undergone a part restoration which was incomplete. When the client purchased the Hall their intention was to create a boutique country hotel so a lot of the work that had already been undertaken had to be redone to reflect the change to commercial use.”

“The overall task was taking an existing older country house and converting it into a small ten-bedroom hotel with all the necessary facilities to make it functional. The client also wanted to add an indoor swimming pool, gymnasium and spa.”

Each bedroom at the hotel has been individually styled to create its own distinctive personality. The resulting themes have been carefully selected to compliment the history of the building, with no detail left to chance. The seven themed standard rooms – Hare, Sycamore, Grouse, Raven, Stag, Hawk, and Poacher – have super king-sized beds, marble bathrooms and superb views. Those looking for a little more can stay in one of the three luxury rooms – Hunter, Bramble and Horse – with sweeping views, an extra-large bathroom with a separate walk-in shower and luxurious complementary toiletries.

“In terms of the design I was pretty much given a freehand because the client was aware of my work both in private and public properties. I put together a proposal that they liked very much and was allowed to progress un-hindered.

“I really wanted to maintain a country house feel, which was important to the client as well. We weren’t looking to go for anything too modern as we wanted to be sympathetic to the period property and maintain a warm, classical look.  It was important to ensure the space felt comfortable and inviting while retaining a respect for the period charm. Given it is a boutique hotel it needed to feel individual and unique.

“As the client wants to establish a brand, we have emphasised their logo which is a stag. This is a continuous theme throughout the building.”

Despite only being open for a short time, feedback from guests and visitors so far has been hugely positive. The hotel’s restaurant in particular, under the guidance of head chef Steven Murray, has been singled out for praise. Traditional English cooking has been blended with modern twists to create dishes such as Roast Breast of Scottish Chicken, Wild Stonebass and Warm Carrot Mousse. Light lunches and afternoon tea are served in The Drawing Room while a selection of fine wines, malt whiskies and gins from around the world are served in the bar.

If the surroundings are not relaxing enough, the Walwick Hall spa offers no fewer than 30 treatments as well as use of the indoor pool, steam room and gym. As is the case throughout the hotel, even the pool makes the most of the special views as it is encased in sheer glass walls. Further afield hunting and shooting lessons are available through the reception while Kielder Observatory is only a short drive away.

Reflecting on the project as a whole, Trevor concluded:

“I have had some very positive feedback and I’m delighted people like it. The finished product ticks all the boxes we wanted to achieve in that it’s an inviting, warm and cosy environment. It reflects the nature of a country house.

“It is always a privilege to work on a project of this quality, where the new owners have invested heavily and been generous with the budget. The fact they are friends meant in one respect it was easier but in another there is even greater responsibility. You want to do a good job and justify the faith they have placed in you. It’s been a very enjoyable experience and I appreciate the opportunity to be involved.” 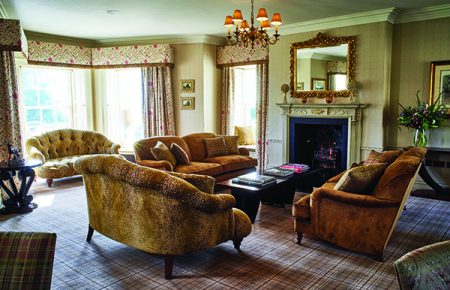 The Dickinsons Commercial division is a developing and expanding department of Dickinson’s Furnishers, established in 1878. It is headed up by Diane Clark who has a wealth of experience and 21 years loyal service.

Dickinsons Commercial has an eclectic portfolio covering everything from large scale domestic projects for loyal, returning clients to hotels, restaurants and show homes. Projects have included Close House hotel, including the Terrace rooms and more recently overseeing the conversion of the main building back to a magnificent family home.

Additional works include The Valley Indian restaurant and high end holiday lets in the Lake District including the Curious Orange, Cosy Peacock and Thyme out. Dickinsons Commercial has also completed work for Gordon Brown’s Estate agents and both the show and view homes at Cresswell Farm.

Most recently, Dickinsons Commercial was involved in the Walwick Hall Hotel project. Dickinsons Commercial were involved from the initial consultation throughout, with the design, selection and installation processes for all soft furnishings including supplying all wallcoverings, all fabrics for drapes, pelmets and upholstery and also the carpets.

“It was an excellent opportunity to be involved with an exciting development from a very early stage with the chance to be given the brief, envision where it could go and make it come alive. It was the opportunity to work with the owner and other established teams with whom we shared a common aim of exceeding the brief which has led to such a fantastic end product. We wanted it to feel like a big country house welcoming you in and giving you a stylish, warm embrace with interiors that complement the amazing setting, grounds and surrounding scenery.”

“We thrive on being an all-encompassing design service with an eye for detail. We are able to assist from the very beginning of a project through to completion. We listen to a client’s brief to ensure we provide the best possible interpretation delivering the best scheme to meet the end use.

“We pride ourselves on our excellent, dedicated customer service and communication throughout projects and fantastic end results.” 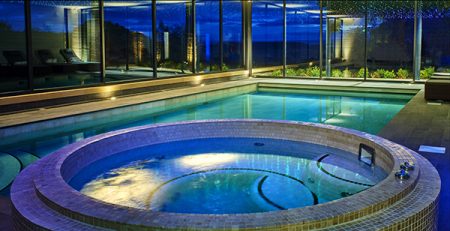 A19 Pools & Spas specialise in the construction and refurbishment of domestic and commercial swimming pool facilities including hot tubs, sauna and steam rooms. The company has been constructing swimming pools since 1986 and within this time have constructed more than 150 prestigious pools in private residences, as well as for many commercial sites such as sports centres, hotels and schools throughout the UK.

Over the last 30 years, A19 Pools & Spas has also built up a fantastic reputation for the provision of special needs hydrotherapy pools such as those at Barnet and Southgate College in north London and Claremont School in Bristol.

Most recently, A19 Pools & Spas has been involved with the work at Walwick Hall. Working on this project, A19 Pools & Spas were responsible for the design, construction and finishing of the pool, hot tub and steam room, including all mechanical plant.

“Although we work throughout the UK we are based in Durham and are therefore particularly keen to be involved in projects in the north east, such as Walwick Hall.”

“We are recognised by The Swimming Pool and Allied Trades Association (SPATA) as one of the UK’s premier swimming pool companies and as a family-run business we are particularly proud of the quality of our staff and our work. This is evident in the number of national awards achieved and by the fact that most of our work comes via recommendations from existing customers.”