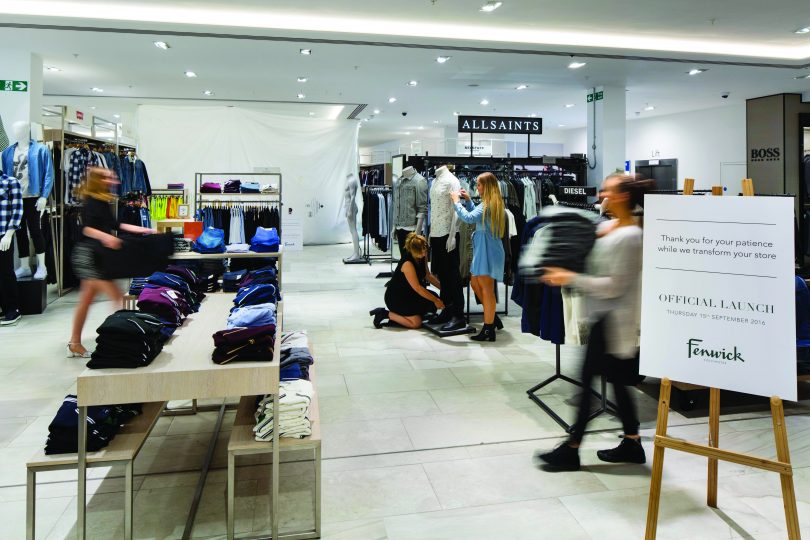 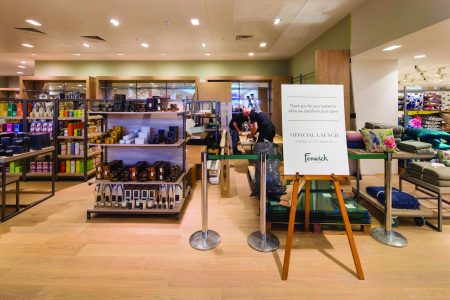 Opened mid-September, the £35 million project is a major redevelopment of the previous Williams & Griffin site.

The project includes a 40,000ft2 extension, a restoration of the 50 metre frontage and the preservation of some of the original design features. During this redevelopment, the store itself was kept open for trading meaning customers could watch as the refurbishment took place. The department store is made up of two different buildings that are joined together in order to create a unique shopping experience.

It was last October that the store moved into the new building with the old building being closed for the eight month refurbishment. From 27th August to 14th September this year, the final touches were made to the store including the final shop fittings to some of the units and the joining of the two buildings together to get the total trading space of 90,000ft2.

Within this 90,000ft2 retail space are the men and women’s fashion floors, a beauty hall, a homeware section and a personal shopping suite. The new store will be home to over 600 brands, with 70 that are new to the store and 20 that are new to Colchester. 75% of the retail space will be taken up by fashion, beauty and accessories brands where as the new Beauty Hall will take up over 10,000ft2. This hall will feature an exclusive beauty lounge offering new treatments across skin, nails and brows as well as double the amount of customer stations for free consultations for each beauty brand. The Beauty Hall features a vaulted high ceiling with two prominent interactive digital billboards showcasing the store’s latest collections and brand content.

Other stand out features of the building include the handbag department, two atriums, a personal shopping suite and the Tudor and Georgian style fronts of the store. The ground floor atrium allows a view for the above three floors whereas as the secondary atrium looks out from the handbag area. On the first floor there is a Café Nero which occupies the space that used to be Jacklin’s tea room.

“This was done as a nod to the historical significance that the space has to the store,” commented Carl Milton, the Managing Director of Fenwick Colchester. Also featured on the first floor is the personal shopping suite the Tudor room, which is part of the 15th Century former merchant’s house that will trade beauty brands such as Aveda, Tom Ford and Jo Malone. Fenwick Colchester will also feature the largest number of menswear brands under one roof, comprising of 64 brands across fashion, accessories and formalwear. 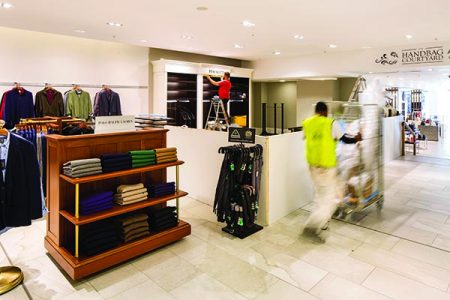 The main contractor Sir Robert McAlpine, as well as the Fenwick Colchester team worked closely with the London based design studio HMKM in order to create the new department store. “We were very keen to use local references within the design,” commented Carl, “we tried to create a welcoming atmosphere using the unique features of the building.” The interior used wood and metal as the main materials and took references for the design from local businesses and architecture. The inspiration for the handbag department was taken from the Crittall windows from a local business. The Men’s and Women’s accessories area took inspiration from the Dutch Quarter within Colchester which has Tudor style buildings with bright coloured façades, whereas the shop fit on the fashion floor drew from a nautical theme. In the first floor Tudor room the designers kept the original crown and only changed the surrounding timbers.

The redevelopment restored the extensive 50-metre frontage which is a blend of contemporary and historic architecture. The 15th Century building had its Tudor façade carefully dismantled and taken offsite to be restored by a local specialist company. The building next door with Georgian windows only had a light restoration as the period features were still in good condition. The building that houses the handbag area also only had a light touch of restoration. “We didn’t want to restore it to a pristine façade as we wanted to maintain the building has been standing there since 1927,” said Carl, “the main frontage overhaul took place in the main entrance as we effectively took off the old store front and replaced it with an open four metre deep glass atrium.”

One of the biggest challenges faced by the whole team working on the redevelopment was maintaining the trading space whilst work was happening. “One of our key aspirations was to keep the store available and open to our customers. We planned with my team and the design team to ensure that we could maintain the objective of a shopping environment at the same time as undertaking this significant work.”

“I’m immensely proud to have taken this store through this transition. My team have worked so hard and tirelessly over the last two and a half years on a transformation that we’re absolutely proud of.” The feedback of the store was been very positive even through the non-complete stages. Customers have compared it to West End shopping centres and are delighted that they can stay local when shopping.