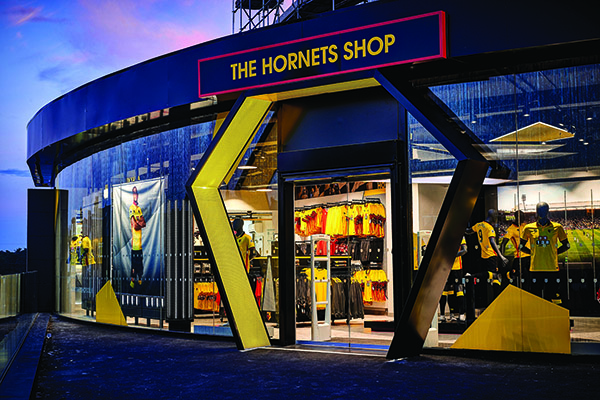 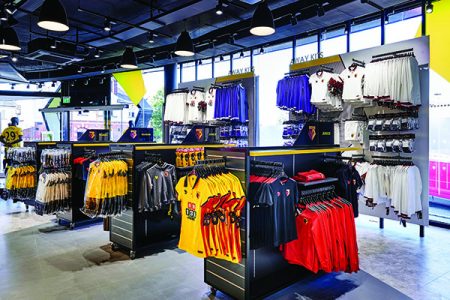 Watford Football Club has been able to celebrate success on and off the pitch this season after the club’s strong start in the Premier League was matched by record sales at the new stadium store. The new shop opened at the beginning of the season as part of a wider effort to improve facilities at Vicarage Road.

After winning promotion to English football’s top flight in May 2015, the club committed itself to a number of stadium improvements including an increase to the overall capacity, a doubling of the main TV commentary gantry and a larger shop to be embedded within the north-east corner of the ground. Visual merchandising specialists NotRocketScience were tasked with project managing the development and delivery of this store. Tam Lever, founder of the company, spoke to Premier Retail about the project:

“The club asked me to come and speak to them back in May 2015, just at the point they were promoted back to the Premier League. They were looking at doing some refurbishments and improvements around Vicarage Road; in particular an infill between two existing stands. Their existing shop was about 70m2 and they wanted to upgrade to something bigger.

Now measuring 240m2, the Hornets Shop has more than tripled in size and features a number of striking features that set it apart from its predecessor, as Tam explained:

“The most striking feature of the store is the 32 metre glazed façade. It is quite different from the perspective of normal stadium stores as it has been built specifically as a retail space. The curved frontage means there’s lots of light and height, which is a nice luxury to have. We’ve created some great design features.

“There is a portal in the centre of the glazing of the main entrance and it’s basically designed around the club crest. It has a particular diamond shape that we’ve taken and used in a lot of detailing in the store. On the floor, the perimeter wall panelling, the cash desk and the print shop counter you’ll see that same faceted shape appearing.

“Inside the store there’s a central mannequin display with overhead ceiling rafts that provide mood lighting, with a full height graphic behind it. One end of the store is cash and wrap with eight cash tills set up for match days while at the other end is a dedicated print shop for shirt personalisation. The print shop has been designed like a lab. It’s behind glass and creates theatre for customers while they watch their shirt being printed.” 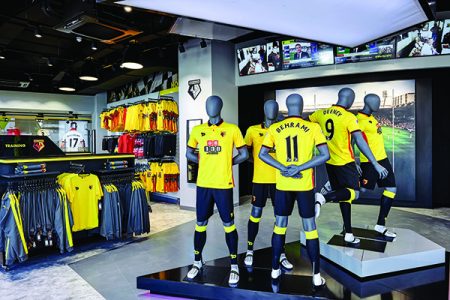 “You have one side of the store dedicated to the kit and training range whereas the other side is own brand fashion, accessories, gifts and homewares. Behind the cash desk they have a massive video wall on which they play in-house content and match highlights – if Watford win!”

In terms of challenges, it was crucial that the new store be flexible to deal with fluctuating customer numbers. Stadium stores are unique in that 90% of the time they trade like a regular shop but for 10% of the time it will be operating on a match day with large numbers of people trying to get in and out of the store before kick-off. The key is to find a blend between design and functionality. In the Hornets Shop an automated call forward system has been put in place along with a queue merchandising system to make the process as smooth and quick as possible, whilst still generating sales from the customers queuing.

Feedback so far has largely been positive with the first home game of the season producing Watford’s biggest retail day ever. Tam concluded:

“In terms of how it turned out, it was probably one of the few projects that I’ve worked on where we’ve really stuck to the design concept. When you look at the original conceptual drawings and hold them up against the shop, it looks pretty much the same. There’s not really been any compromise, which is amazing!

“Feedback from the club has also been great; the chief executive was very pleased with the outcome. It’s a small part of the stadium redevelopment and it’s great that it’s in a prominent location. It’s definitely the Premier League of retail!”