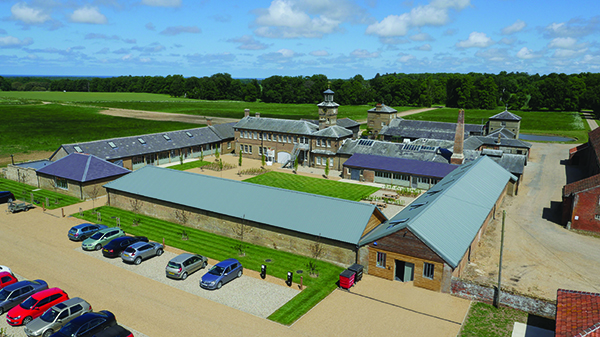 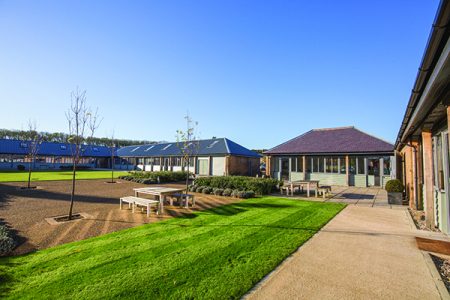 Holkham Estate, a privately owned 25,000 acre agricultural estate on the north Norfolk coast, is much more than a classic stately residence. Encompassing a range of facilities besides the 18th century Holkham Hall, recent developments have seen the Estate launch enterprises designed to maximise revenue in line with modern trends.

Holkham Studios is one such project, with the aim of offering 21st century office space in a historic environment. A two-part development, phase 1 was completed in 2015 with phase 2 scheduled for completion in March of this year.

As is the case with many similar estates across the country, the Holkham Studios project had its origins in the conversion of previously underused buildings. The location known as Longlands on the Holkham Estate is one of the estate’s principal former farmstead and workshops, forming approximately 50,000 sq. ft. Through centralisation of farming practices and the reduction of directly-employed labour, the buildings have become largely redundant.

Phase 1 involved the conversion of 7,000 sq ft of existing buildings that were largely open fronted cart sheds and agricultural buildings. The spaces created in this first phase were designed with contemporary finishes to create a blend of the past and the future. Making maximum use of the space, working areas are large, light and open plan.

Phase 2 of the project was split into two parts with the first half completed in October 2016. The second phase is a similar development to phase one, except the office units will be slightly smaller due to the market Holkham will largely be aiming for.

Ahead of completion of the entire project in March of this year, General Manager of Land and Property James Bracey spoke to Premier Construction:

“Phase 1 was very much a success and phase 2 has gone smoothly so far. We made the substantial infrastructure investment within phase 1, putting in place all the things that are generally lacking in a remote location like electricity, sewage, car parking space and road access.

“From a design point of view, the office spaces are single storey and are quite formal. Previously, the buildings were open fronted cart sheds that looked in on themselves in various courtyards with a central building in the middle.”

Once opened the work spaces will offer amenities such as 100mb broadband and free parking in a location that cannot be matched in the middle of a city. 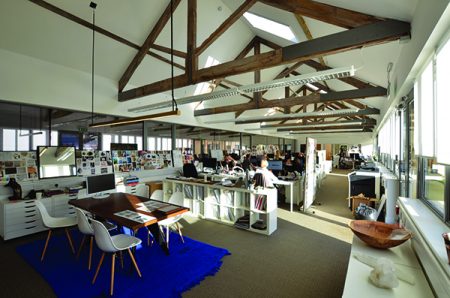 With an eye on future maintenance, ground source heating has been put in alongside other environmental elements embracing Holkham’s commitment to sustainability. As is usually the case on projects such as this, the history of the buildings being developed meant certain challenges arose:

“I think working with the various statutory bodies involved in a project like this is always a challenge. We had to take to them along with us on the journey, showing them what we had done and what we wanted to do. From a building point of view, we were dealing with listed buildings but Historic England and the local authority were very accommodating.

“There were a few ecological issues – we had a short hiatus dealing with bats that had taken up residence! Overall though, problems that arose were always resolvable. The biggest challenge was getting the infrastructure in place. Simple things like getting high speed broadband implemented were not straightforward.”

In addition to Holkham Studios, other recent projects on the estate included the opening of a dedicated events space called The Lady Elizabeth Wing. Situated in an old pottery factory building adjacent to Holkham Hall, the space offers facilities for up to 250 dinner guests, 320 conference guests and 400 guests for a drinks party.

Looking ahead to the completion of the Holkham Studios project, James concluded:

“When completed, the project will mean a number of things. It is a fantastic and innovative way to use the best of the past and the best of the future in a building with an unrivalled setting. The new use of the building will bring long-term economic prosperity as well as creating jobs in the area. On the back of an international business moving in, others have followed suit. There is a confidence in the location that people can work in a remote place and get the best of both worlds.”