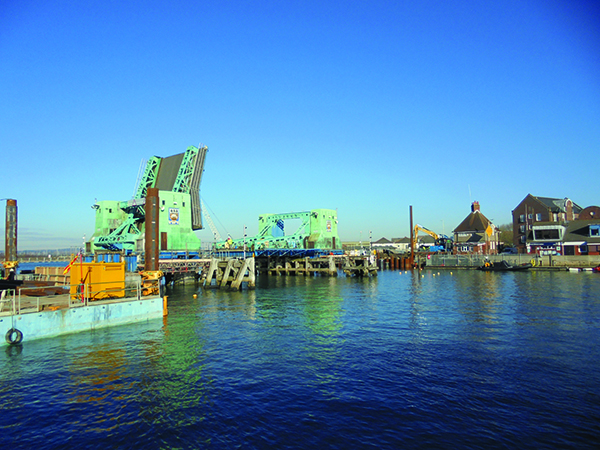 Borough of Poole have invested in major multi-million pound improvements to the town of Poole.

“We’ve got an ambitious investment programme of around £23 million up and running in Poole. This is funded by Dorset Local Enterprise Partnership (DLEP) through the government’s growth deal to help drive local economic growth and bring an anticipated £500 million of leveraged private investment in to the area. It is also part funded by the council,” commented John Rice, Engineering Manager at Borough of Poole.

“The three main schemes in the programme are the Gravel Hill project, which we completed last year, the Poole Bridge project which is currently under construction, and the Townside access scheme, which is still in the design stages.  These three schemes are designed to improve the link from the A31 trunk road to the Port of Poole.

“In addition to that we have the repairs of the Dolphin Shopping Centre multi-storey carpark (MSCP) and the Street Lighting Project both at implementation stage.” 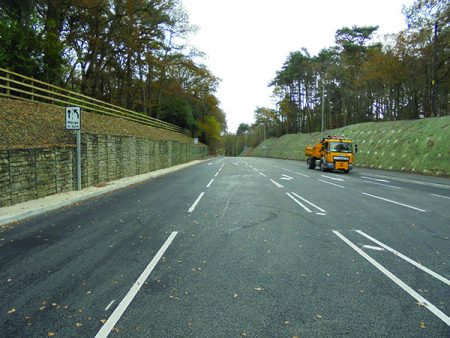 Gravel Hill (A349) was closed from Queen Anne Drive to Arrowsmith Road from July to November last year for repairs and improvement works. As the main link from the A31 trunk road to the Port of Poole and Poole Town Centre, this road is used by approximately 27,000 vehicles each day. In order to keep the road open, the £3.9 million construction works were carried out to prevent long term disruption.

“There were three key strands to the work. There was a main embankment that had a history of minor failures which needed strengthening, we created a cycle link between the existing network in the town and a large residential estate at Merley. We also wanted to increase the capacity of the junction at the end of the section of road,” commented John. The main contractor, Mildren Construction, carried out the bulk of the work which involved major earthworks to widen and stabilise the embankment, refurbishment of the large culvert (man-made piped structure) which carries Blackwater Stream under the road, widening the existing footway, as well as improvements to the road’s surface drainage.

To improve traffic flow and reduce congestion, Queen Anne Drive was widened and signals were upgraded to provide a toucan crossing, which was also done at Dunyeats Road junction. A shared footway for pedestrians and cyclists around the junction was also introduced.  The works to these major junctions were undertaken by the council’s in-house construction team.

“There were a lot of environmental constraints for this project. The design work was led in-house by Engineer Beth Barker-Stock and we used Mouchel to help us with the geotechnical design elements. We had to undertake quite a lot of preparation in particular seasons to manage the wildlife with regular visits from our ecological expert to advise on a whole range of issues,” added John. 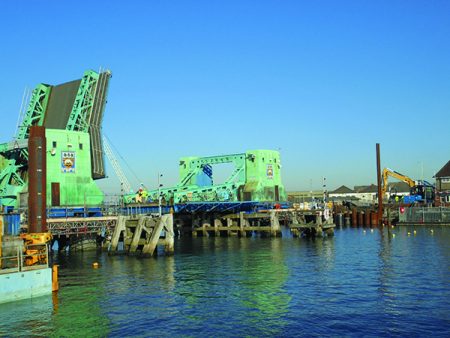 The 89 year-old Poole Bridge was closed in September 2016 for nine months and will be opened in June of this year to accommodate the nearly £6 million development which will allow the approach spans to be replaced, and for the roads and pavements to be widened. “We’re also replacing the bridge control system,” added Lynne Wait, Senior Engineer at Borough of Poole. “We worked with Mouchel on the design, who are our partner consultant, as well as a team from Wilkinson Eyre Architects. Our role in the design was to prepare all the tender documents, administer the tender process and now we’re supervising the works on site.”

The bridge lifting leaves have been kept in the raised position as much as possible to allow boats to pass through unhindered. The lifting leaves of the bridge will remain at their current width but the approach spans will be widened which will allow lorries to pass more easily. There will also be new barriers, lights and a vehicle restraint system similar to the Twin Sails Bridge (Poole’s second lifting bridge completed in 2012).

So far, the large piles have been installed for the new piers with coffer dams being constructed to enable the abutments to be built and off-site the fabrication of the steel beams has begun. “To complete the bridge project, we’ve the rest of the piles to put in to support the abutments, the reinforced concrete abutments, and then there will be the installation of all the new steelwork and construction of the deck which is pre-cast concrete planks.” 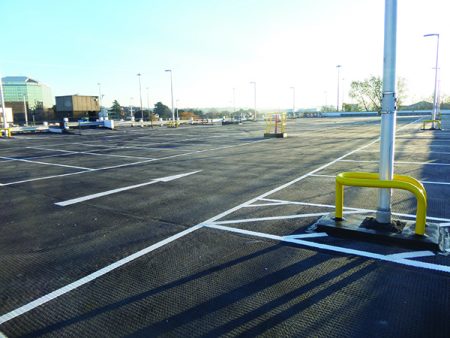 “Phase two will start in the spring of this year. This will involve concrete repairs to the whole car park structure, except the roof deck, including the slabs and columns. We will add circulation arrows, white line markings and put in a new LED lighting system. Enhancements to the stairwells and the other public areas will be made as well,” commented Lynne. 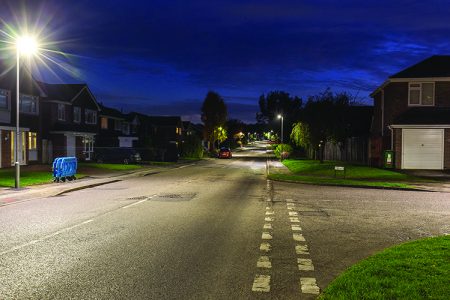 The Street Light Project aims to replace most of the street lights in the Borough with energy efficient LED lighting by April 2018. Being completed in phases, a total of 17,500 lights will be replaced. “We’re replacing the lanterns to save energy and carbon emissions. Also, part of the project is the replacement of some lamp columns,” commented Lynne, “Typically the ones being replaced are the old concrete ones which are over 40 years old, so the project is a combination of asset renewal and energy saving.”

Phase one involved replacing half of the 17,500 lanterns. Phases two and three, which will be done in the next two years consecutively, will be the remaining 8,500 lights and columns.

“The projects as a whole have meant it’s been a challenging time but it’s been interesting and rewarding,” commented John, “We’ve had the opportunity to get a lot of our colleagues involved which has helped develop our team and it’s nice to be in a position where we have been able to invest in the infrastructure of the town which benefits the public.”