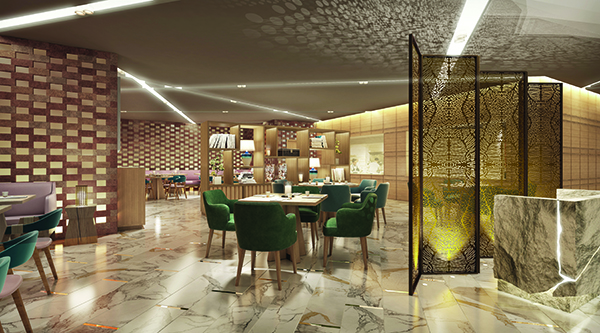 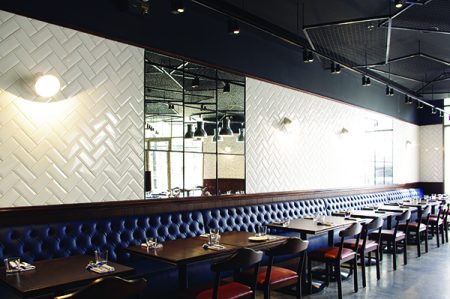 Established by designer Ian Haigh in 2010, Central Design Studio developed from the simple idea of being a small team at the centre of the design process. The company specialises in leisure and hospitality design with the odd residential project thrown in. “We’re known for creating relaxed and informal interiors with a focus on quality rather than luxury, meaning we’re quite well geared towards our client market,” commented Ian, Creative Director of Central Design Studio.

The studio has worked with numerous leading names including Hilton, InterContinental, and Accor, amongst others. Central Design Studio has also delivered exclusive projects for start-ups, entrepreneurs and private individuals. “It’s great to have worked with these large, well-known brands. We’re quite a small company and very hands on, so it’s nice to work with companies like that but it’s also nice to work on start-ups as well,” added Ian, “We have a great mix of clients that allow us to work on a range of different ideas and concepts.”

Central Design Studio creates tailored interiors, allowing for a more personal design experience. “We treat a concept for each project as new and we try not to go in with any pre-conceived ideas. We work hard to develop a narrative and look at the context of where the project is and all these other elements, so rather than have a one-sided approach it’s much more bespoke,” said Ian.

“At the time we were introduced, Food International was a start-up company – and they are a very interesting young company to work with,” commented Ian.  Hualan, a high-end Chinese restaurant, was the first of the restaurants to be completed by Ian and his team. The design for Hualan was worked on for three years before it opened in late summer 2016. “The inspiration behind this restaurant was the idea of a Chinese garden – a place you can go to relax and enjoy the surroundings,” added Ian. “The name ‘Hualan’ is a play on the Chinese words for ‘flower’ and ‘garden’. The idea of nature meeting geometry was the whole narrative behind the restaurant which then informed all of our design decisions.” 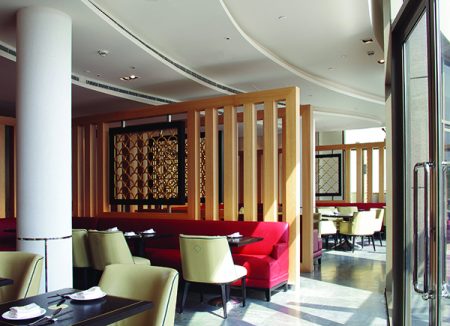 Motifs are used throughout the interior such as the cotemporary, freestanding, natural oak screens and are taken from the geometric designs that are found within Chinese gardens. Peppered throughout are also layers of traditional screens in gold leaf to add colour and texture. “We put in a contoured, sculptural ceiling that flows throughout the space that is inspired by the mix of nature and structured geometric shapes that make up the gardens,” commented Ian.

Bespoke furniture, designed by Central Design Studio and made locally, uses a combination of black oak, brass detailing and natural aniline leather. The black and gold theme runs throughout the rest of the space with black oak, brass trims and gold onyx tops. An art installation is also used within the interior as Ian added, “We commissioned artist Steven David Graham to produce a 300 piece ceramic wall installation based on a flower petal motif, which we shipped from the UK and installed.”

Due to open in January 2017, Fiamma is an informal and relaxed Italian restaurant. “This restaurant is very different to the offering at Hualan,” commented Ian. “The influence behind this was the Italian neighbourhoods in New York, so it’s a very casual and informal small restaurant that does really great food. That idea of a neighbourhood New York Italian drove the whole design and narrative behind it.”

Fiamma – meaning flame in Italian – has a utilitarian aesthetic. “It’s a very simple design with polished concrete floors and a lot of dark oak timbers,” added Ian, “We payed particular attention to the lighting and the leathers to create an atmosphere that seems comfortable.”

The dark oak is complemented by the white herringbone wall tiles to create a sense of warmth and exposed concrete columns link back to the New York influence. An open kitchen creates a sense of drama for customers with its copper-clad, wood-fired oven which the menu by the well-known chef Francesco Mazzei is based on.

The next project on the drawing board is the high-end Japanese sushi restaurant Yokari. “This will be a refurbishment of Food International’s first restaurant, which they inherited when they began, but didn’t have the interior they wanted.” It wasn’t until after their restaurants Hualan and Fiamma were done by the team at Central Design Studio that they had the opportunity to re-work the interior to fit the concept.

Along with Hualan and Fiamma, Yokari sits within Centria Mall – one of Riyadh’s most luxurious and exclusive malls – and will offer customers the best luxury ingredients in uniquely refined true Japanese cuisine. The idea for this restaurant uses ‘light’ as the main narrative, with natural tactile materials to create a sense of warmth and atmosphere.

“The fourth restaurant we’re working on for Food International is in the very early stages at the moment and it’s an Indian concept. It’s based around the Raj era, and again will have a very different look and feel,” commented Ian.

“Working with a company like Food International, who trust us, means we’re able to work on more projects moving forward. We don’t advertise so it’s all through word-of-mouth with the majority being repeat business. When I first started the company, our first clients were Jamie Oliver and Hilton, and we had two small jobs with them. From these projects onwards business has grown organically and I see that as crucial, as it’s what our business has been built around.”