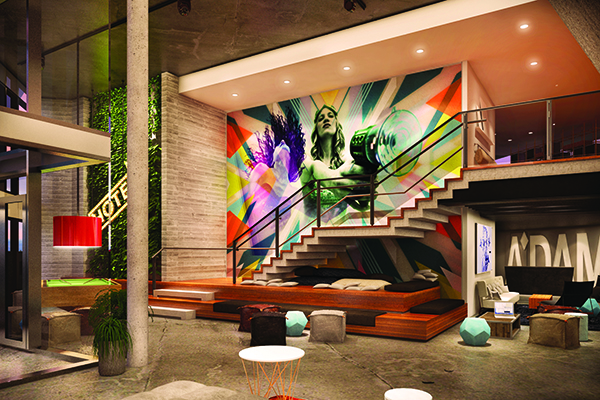 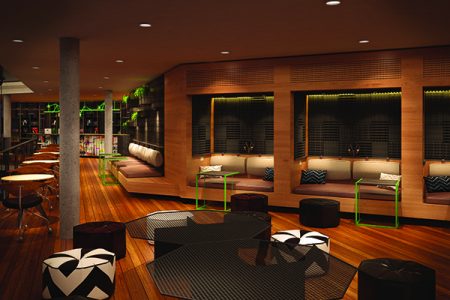 Lifestyle boutique brand SIR had extra cause for a New Year celebration after the latest hotel in its growing portfolio opened in Amsterdam. Sir Adam, located in the iconic A’DAM Toren, has 108 stylish guest rooms and is inspired by music, travel and the creativity of the surrounding community.

Each SIR hotel is inspired by a unique persona and brings a new element to the brand. Sir Adam, for example, is ‘a passionate music junkie with a talent for creating tunes and harmonious connections’. New York interior designer firm ICRAVE was tasked with reflecting this personality in the hotel’s design. Jesse MacDougall, director of strategy and brand development at ICRAVE, spoke to Premier Hospitality about the project:

“The client had embarked on a journey where they were going to expand the ‘Sir’ brand of hotels. They had one called Sir Albert, also in Amsterdam, and that is the first of what is becoming a handful of five including Sir Adam.

“Our design brief was to make the hotel feel like the living room for the whole neighbourhood. We organised the space to maintain transparency throughout the building so people could access it from multiple areas. As opposed to a singular destination, we want people to move through.

“There was a real desire for us to capture the creative energy of the area. There are a lot of young entrepreneurs living in the neighbourhood.”

“In the SIR brand you have to train yourself to think that there is a person living in the building. You often personify the guest, but you go through an unorthodox process of personifying the host. As a design mechanism, it’s a useful abstraction that helps hone the design.”

All rooms in the Sir Adam feature floor-to-ceiling windows with stunning views of Amsterdam alongside cantilevered desks and window benches to maximise the guest experience. The musical theme is maintained through Crosley Cruiser record players whilst decoration has been provided by local artists. Local company Spannend Licht designed the lighting in the hotel with a retro 1970s theme.

Within the hotel, the Butcher Social Club & Terrace serves food all day and has been designed to be a casual venue within which people can connect. An island bar serving worldwide exclusive beers, top end spirits and signature cocktails will host live DJs as the main source of entertainment.

Founded in 2011, the SIR brand has a separate location in Amsterdam that opened in 2013 as well as a venue in Berlin. A fourth site in Hamburg is set to open later in 2017. 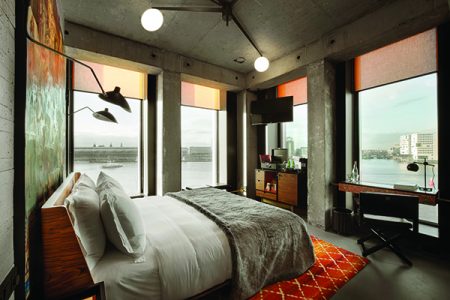 Over the past 15 years Spannend Licht has helped to convert many old theatres, warehouses, factories, and in this case, the vacant Shell Tower into immersive venues. Previously they have worked on the Raymond Review Bar, the Battersea Power Station in London, Bush Tower and several venues in Times Square before focusing primarily on Amsterdam since 2012.

Spannend Licht is proud to be the lead lighting consultant and work with the architects iCrave out of New York as well as the whole Sir Adam Hotel team. After providing the designs & specifications, they programmed the DMX & DALI e:Cue Control System to incorporate both the Butcher Social Club & Sir Adam Hotel’s daily needs into one robust package.

Though the control system is designed specifically to allow hands off 24 hour operation, it also provides management direct control of all functions via custom applications and complete takeover of the lighting for live shows.