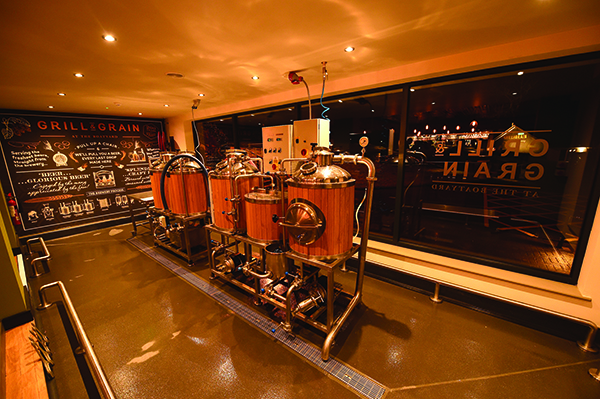 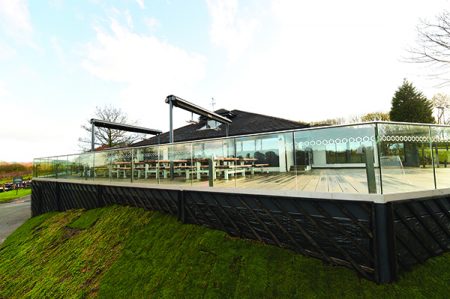 The impressive £1m upgrade which has dramatically transformed a popular hostelry in Riley Green, Houghton, near Blackburn, has reportedly been ‘unbelievably well received’ by old and new customers alike.

The former Boatyard venue recently re-opened under the new name of Grill & Grain at the Boatyard, in recognition of its new key features – a large wood-fired grill and a microbrewery.

The whole pub has been refurbished – completely overhauling the restaurant, doubling the size of the outdoor seating area as well as refurbishing the bedrooms.

The full concept design and project management for the scheme, carried out for Thwaites, was undertaken by Space BDC, who commended main contractors Prime Country Developments for “doing an excellent job.”

Thwaites embarked on a mission to find the best in grilled food, which has led to the development of a new concept for the company.

The venue’s new grill was specially imported from America and is positioned so it is in full view of the restaurant.

Not wanting to lose sight of the brewing it has become famously known for over the past 200 years, Thwaites is also creating a range of beer especially for the Grill & Grain at an on-site microbrewery.

Director of Brewing and Pub Operations at Thwaites, Andrew Buchanan, said: “We’ve travelled far and wide in our quest to find the best in grilled food, testing different cooking fuels and cooking methods. What we found is nothing can replicate the flavours of open fire cooking.

“We’ve gone to great lengths to bring that to Grill & Grain at The Boatyard, importing our wood-fired grill and smokers from America to recreate the flavour sensations we want. It not only helps us cook delicious food but adds an element of theatre to the dining experience.

“It’s a really exciting development for Thwaites and we have invested substantially in transforming the pub. “The micro-brewery is a great addition for us as we are able to use our brewing experience from Daniel Thwaites that we have built up over nearly 210 years and bring it directly to Grill & Grain.

Neil Smith, managing director of Space BDC said: “The wood fired grill is a central feature in the restaurant area and the microbrewery, which is located within the footprint of the building, is a working brewery plant providing bespoke ales to the pub, and can be viewed by the general public.

“The building has changed dramatically from how it used to be with a totally new material and colour palette which reflects and enhances the American grill, creating a warm environment.

“The lighting scheme is completely new and includes spider cage hanging lighting on looping cables. There is also a new feature bar with a roll top copper counter which extends from the bar area right through the restaurant space.”

Other key features throughout the venue are copper ceiling tiles imported from America and new flooring in parquet and slate.

The furniture has been completely renewed and includes feature circular deep buttoned leather chesterfield style seating which encloses a section of the dining area.

Externally, there is a complete new area including a bar, known as The Deck Bar, overlooking canal and countryside views and complete with a new glass balustrade decking area, bespoke oak benches, large dining tables, canopies and outdoor heaters.

Further works included the refurbishment of all eight bedrooms with an existing external bedroom block, with the works including complete re-decoration.

Neil Smith concluded: “The development has been unbelievably well received by both old and new customers and the venue is extremely busy.”

Thwaites was established in 1807 and to this day remains a family run business. The Thwaites Group includes hotels, inns, pubs and a brewery and is focused on providing superb hospitality in outstanding properties in great locations. 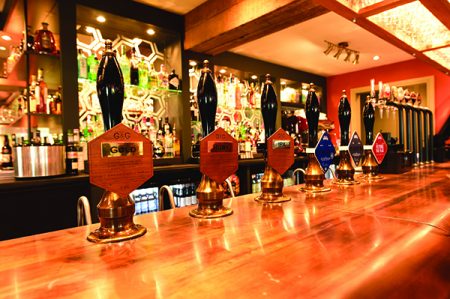 The company has been in operation since 2008, having undertaken many prestigious developments in the first eight years.

Previous clients include Daniel Thwaites, Sea Food Pub Co., Individual Inns and a host of private domestic clients around the North West of England. A number of these jobs have been carried out on listed buildings with the company having specialised in high quality joinery and stonework with many associated subcontractors who all pride themselves in maintaining the Prime Country Development ethos of delivering exceptional quality work.

Prime Country Developments were appointed as the main contractor to Daniel Thwaites for the redevelopment of the Boatyard to the Grill and Grain concept. The location of this site is very important to both companies as a showpiece for all the combined skills of presenting a first class restaurant and leisure offer all in an excellent location.

Prime Country Developments were very proud to be appointed to carry out this concept development and understood the importance to Daniel Thwaites of carrying out this project to the expected quality of all concerned.

Prime Country Developments pride themselves in producing quality construction work, managing projects to the highest standards with a strong belief in training all staff in every aspect of the building trade, including project management, health and safety and quality workmanship.

The many successful projects completed around the North West and the subsequent commercial success is testimony to the Prime Country Development ethos.

“We would like to wish Daniel Thwaites every success with this new concept and would be delighted to be associated with any similar developments in the future.”