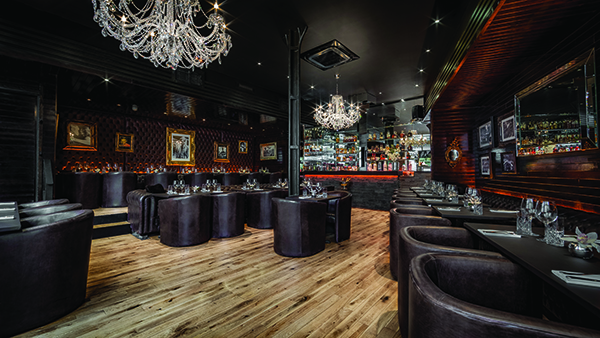 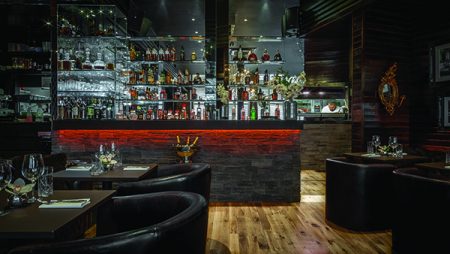 Inspired by the ‘King of Cool’ Steve McQueen, The Grill at McQueen is a sophisticated new restaurant located in Tabernacle Street in the heart of Shoreditch.

Adjacent to an award-winning lounge bar and atmospheric nightclub, this stylish restaurant boasts a menu created by former Hawksmoor Head Chef, Richard Sandiford, with Richard James (also ex Hawksmoor) heading up the kitchen. Hollywood glamour with an extravagant flourish of leather fur and Swarovski crystal as well as many visual references to the playboy image of McQueen himself, are the keynotes of the interior design of this stunning spacious new venue.

Fit out contractors for the project were DCM, led by Peter Reardon, who were commended for the high standard of their work.

The sleek interior design has been created by McQueen owner and designer Dezzi McCausland, who outlined some of its key features: “The design is very high end, taking the McQueen image to a whole new level. It is based on what a room in the home of Steve McQueen might look like and combines McQueen’s iconic ‘cool’ style with Hollywood glamour and a 1960s/70s vintage feel.

“For example, the lighting includes Swarovski clear crystal chandeliers and Belfast crystal lamps, which are complimented by our use of 100 per cent crystal glasses.”

Another distinctive feature designed to draw attention to the bar offer is the large glazed back bar display with shelving in low iron glass, which has no grain and serves to showcase spirits including bourbon, whisky, gin, rye, rum and brandy. Another striking feature at the bar is a large bespoke cabinet incorporating a display of crystal glasses and decanters of all types.

Dezzi McCausland continued: “A further striking element of the space is the use of Steve McQueen-associated images on the walls, including his family and friends – as well as cars, motor bikes and machinery and even a miniature aeroplane and a chrome propeller which were all a particular interest of his and help reflect his personality in a relaxed, classy way.

“I also included chesterfield style leather seating and lots of faux fur cushions and throws to reflect the 1960s and ‘70s feel – as well as to provide a warm, soft and cosy environment.”

Adding yet another layer of decadent luxury, is a 65 inch screen TV concealed behind a bespoke two-way mirror which is used to show movies on certain nights.

Another major feature which looks quite impressive was the addition of white wooden internal blinds to the windows to serve as a contrast to the darker colours used in the design palette.

On the practical side, the impressive design of the venue is supported by a state of the art kitchen including newly installed bespoke grills and barbeques as well as huge combi ovens.

Dezzi McCausland said: “We invested heavily into the kitchen – and the ex-Hawksmoor team who are in charge there.” 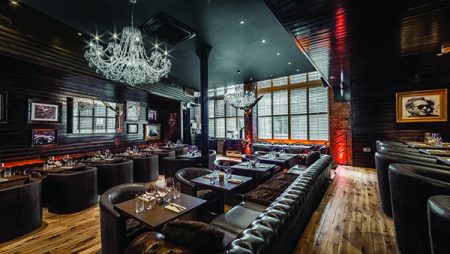 The menu includes a delicious selection of modern European dishes created and there is also a substantial bar food menu to soak up the drinks on offer.

Dishes on the menu include an extensive selection of steaks, with sauces including stilton and bone marrow gravy and cuts including D-Rump. Starters include Roasted & Raw Beets, and Yakisoba BBQ braised belly pork with Red Slaw, Stilton and Candied Walnut. Mains include half roasted free-range chicken in comfit garlic with wild rocket; grilled lamb chops, crispy sweetbreads, salsa verde; caramelised chicory and roquefort gratin, and fish.

Dezzi McCausland concluded: “DCM did a fantastic job on the fit out and will be continuing with further projects for us. We’ve only been open since the end of November but we’re already getting great reviews and the venue is proving to be very successful.”