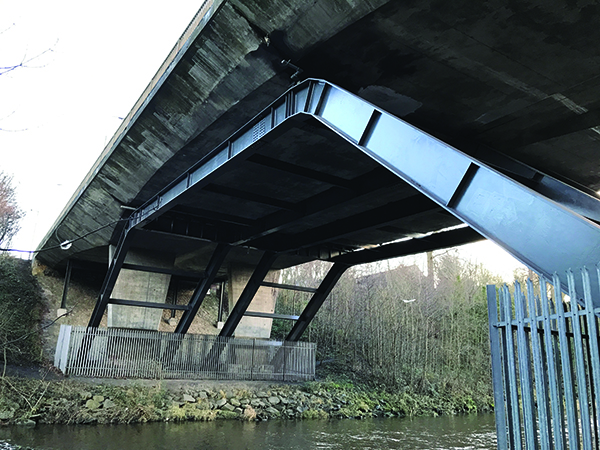 A project to renew the protective coating on the A90 Cramond New Bridge steel support structure and repair various areas of the bridge itself is nearing completion just outside Edinburgh.

Built in 1964 to carry the new A90 road from Edinburgh out to the Forth Road Bridge, and replacing an older structure, the Cramond bridge was originally a simple concrete deck supported by paired concrete piers on either bank of the River Almond.

In 1999 it was reported that a 25 tonne weight limit was being imposed on the bridge due to structural weaknesses, and a year or so later a steel framework was inserted under the bridge to provide additional structural support.

The scheme is being carried out for the City of Edinburgh Council by main contractors GABRE UK.

The project included the erection of temporary access scaffolding to the bridge’s steel support structure, as well as to other areas of bridge where repairs are required.

The works also required the provision of full containment of steelwork painting areas and the blasting and painting of the steelwork.

Duncan Guinn, contracts manager of GABRE UK said: “The scaffolding was encapsulated by heat shrink plastic and once this was in place a jet wash was used to remove accumulated debris.

“The scaffolding allowed the client to carry out tests at high level to assess the performance of the old paint system, which was proved to be failing. We were already contracted to carry out painting to the lower two thirds of the bridge and the tests established that the remaining third also needed re-painting.

“The steelwork was then shot blasted to the SA 2.5 standard of preparation before a Highways Agency paint system was applied, including a primer, intermediate coat and top coat.

“The scaffolding took around four weeks to erect and the painting took nearly two months to complete.”

Another element of the project includes carrying out concrete repairs.

Duncan Guinn said: “When the scaffold was erected, the council also took the opportunity to inspect the bridge at high level and determined that the amount of concrete repairs needed was higher than initially anticipated. This resulted in the extension of the contract by three to four weeks into the New Year.”

Further works include the removal and treatment of vegetation within two metres of any part of the bridge structure and the replacement of any damaged and missing copes on the bridge’s edge beam under the parapet.

The installation of asphaltic plug joints over the central span end joints and locally resurfacing and inserting sealed cut joints at the ends of the bridge has also been carried out.

In addition, localised masonry repairs and pointing are being undertaken on the abutment bankseat masonry and the base areas of the bridge piers.

The project has made good progress throughout the works.