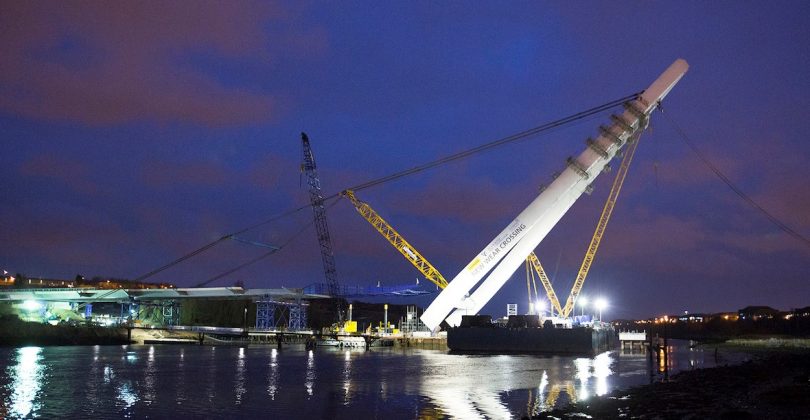 The majestic centrepiece of Sunderland’s new bridge has taken its final position over the River Wear. The 100m white A-frame structure, which will be the focal point of the New Wear Crossing, was raised to its 90-degree resting place at about 3.30pm today (Saturday).

It took 15-and-a-half hours – split over two days – to complete the lift, which saw the 1550-tonne pylon gradually raised into place during a slow and challenging operation. Nothing of this scale – it weighs the equivalent of 125 double decker buses – had been raised in this way since the London Eye was erected in 1999.

The operation was the culmination of two years of design and planning, and 12 months of fabricating the pylon for Farrans Construction and Victor Buyck Steel Construction, which formed FVB joint venture to deliver the project on behalf of Sunderland City Council.

Cllr Paul Watson, Leader of Sunderland City Council, said finally seeing the pylon in place in New Wear Crossing was a huge moment for him personally and the people of the city.

“You can use your imagination, and you can look at countless photographs and impressions, but nothing can really prepare you for what the centrepiece looks like over the river,” said Cllr Wilson.

“I suppose it’s a bit like watching Match of the Day and actually being in the crowd at a football game – there is no comparison and it is the same for me here today. Seeing the pylon raised into position, standing high above the River Wear, makes me feel very proud. It also gives us a real indication of the impact the New Wear Crossing is going to have on Sunderland. We are on budget and on time to complete this project by the spring of 2018, and then we can really start to make sure this new bridge delivers for Sunderland.”

Standing at twice the height of Nelson’s Column and bigger than Big Ben’s clock tower, the centrepiece will be visible from some considerable distance on both sides of the river, as well as from the A19.

The new bridge will link Castletown to the north of the River Wear with Pallion to the south, and will enhance public transport, as well as significantly improve the important transport links to the city centre and Port of Sunderland from the A19 and A1.

However, the New Wear Crossing will bring wider benefits than improvements to the road network.

“For a long time, a huge swathe of land along the south bank of the river was in need of regeneration and this bridge is enabling us to do that,” added Cllr Watson. “Developers are already showing interest in regenerating this area, which will bring investment into Sunderland, create jobs and boost confidence in the city. Crucially, the new crossing will also improve links between the A19 and A1 to the city centre and the Port of Sunderland, which will be good news for businesses, residents and commuters. I have no doubts that this will be a bridge to a brighter future for the city.”

He said: “It’s a great day for everyone working on the project – we have been working towards this day since we broke ground 19 months ago. We could have built the pylon on site, from the ground up, but we chose to fabricate it in one go, off site, in a factory environment because we had better control over conditions, got a better quality of finish, and could avoid having people working at height. The transportation of the pylon from the fabrication yard in Belgium and the raising on site have been challenging, but we planned well and the result was a successful operation.”

Patrick Van Severen, Project Director for Victor Buyck Steel Construction, said a massive milestone had been reached in the project, but there was still a lot of work ahead.

“Lifting the pylon was definitely the most challenging part of this whole project,” said Patrick. “The sheer size and weight of the structure, as well as its shape, meant that getting it here on site, attached to the foundations and then raised into position took a lot of preparation and precision from a large team of people who each brought their skills to the project. We had allowed the whole weekend for the raising operation, but we completed in less than 16 hours over two days, so we are very happy. Now our focus turns to the next phases of work. We will be launching the bridge deck out across the river in Spring and will start connecting the cable stays in the summer. After that, people will really see the bridge come to life.”