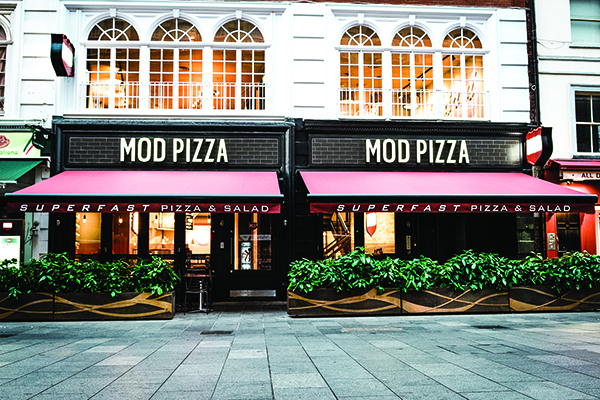 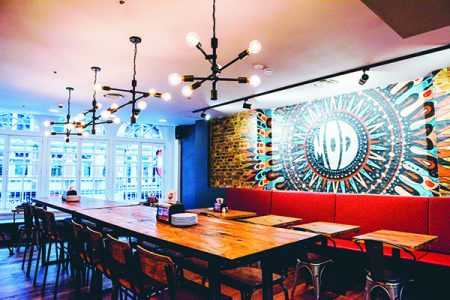 This will be the fourth UK location for MOD, which made its debut in Leeds in June 2016, followed by openings in Brighton and Gateshead. Following Leicester Square, the brand opened its fifth location in Nottingham before the end of the year with plans to continue its rapid expansion into 2017.

MOD’s individual artisan-style pizzas and salads are individually crafted, allowing customers to choose whatever they like from over 30 toppings, or choose from a menu of MOD classics – all for one set price of £7.87.

Pizzas are made with fresh-pressed dough and cook in just minutes, and salads are hand-tossed in front of the customer. The menu is rounded out with soft drinks, hand spun milkshakes, house-made lemonades and iced tea, beer and wine.

The partnership was formed in order to introduce the UK to MOD’s unique approach to delivering totally customised artisan-style pizza, while sharing the company’s unique culture and its ‘purpose beyond pizza’ – a commitment to use the business to make a positive social impact on its employees and in the communities it serves.

Sir Charles Dunstone said: “MOD has disrupted the pizza industry in the US, and continues to expand across the country at a rapid pace and with great success. We are proud to be working with Scott and Ally and bringing MOD’s fresh and affordable pizza to communities across the UK.

“We are extremely excited to bring MOD to London’s West End. Opening in central London is an amazing opportunity for us to bring the MOD brand to life in a big way – showcasing our people-first culture and meaningful community engagement.”

Added Scott Svenson, co-founder and CEO of MOD: “Our arrival in London is one of the most exciting milestones for MOD. Having launched our first retail brand, Seattle Coffee Company, in Covent Garden two decades ago, it was thrilling to return to the city that provided so much inspiration for MOD.

“We have looked forward to not only introducing MOD’s amazing product to Londoners, but sharing our people-first culture, which is driven by our belief that a business will thrive when putting people first.”

For the London opening, MOD joined forces with Global Radio’s Make Some Noise to support inspiring charities including London based Prospex, Heart n Soul and Community Focus – each focused on supporting young people impacted by poverty or disabilities.

100 per cent of the proceeds raised during MODs opening day were donated to Make Some Noise.

MOD Pizza was founded in Seattle, Washington in 2008.

With more than 175 locations across 19 states, MOD is committed to creating a positive social impact in the communities it serves, by not only creating a cool place to eat, but an inspired place to work.

MOD was recently ranked as America’s fastest growing chain restaurant by Technomic. In 2016, MOD earned a spot on the Inc. 500 list as a fastest growing private company in America, and was recognised by Fortune as one of the ’20 Best Workplaces in Retail’ for its progressive hiring practices and career growth opportunities. 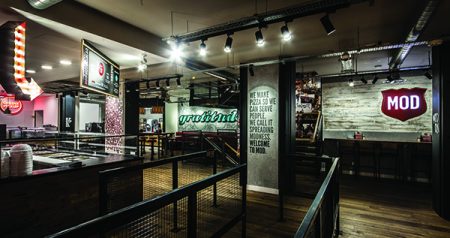 Spectrum SG Limited is a sign specialist, supplying signs across a wide range of sectors, but with a specific focus on restaurants, bars and clubs. Services include the manufacture and installation of signage, graphics, wallpapers, neon, printed awnings, heavy duty parasols (with light and heat), printed café barriers and planters.

Spectrum SG Limited has been in operation since 2009 and within this time has worked on a number of nationwide roll out programmes for leading names such as Bella Italia, Café Rouge, Wasabi, Wagamama, Bills, Busaba, The Breakfast Club, Homebase, Alfa Romeo, Jeep and Fiat. Most recently, Spectrum SG Limited has been involved with MOD Pizza, supplying and installing printed awnings to the new site in Leicester Square.

“It is important that we build partnerships with the very best high street clients in order for us to showcase our abilities, which include design, production and project managing nationwide roll out programmes from inception to completion.”

“We are a professional company with skilled personnel using the latest in equipment and techniques in order to produce quality and innovative signage and branding across all sectors at competitive prices.”