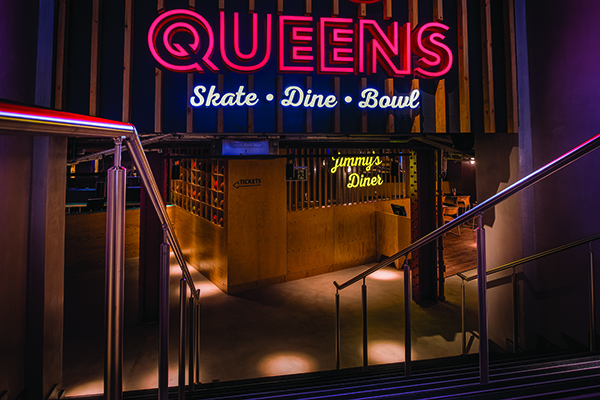 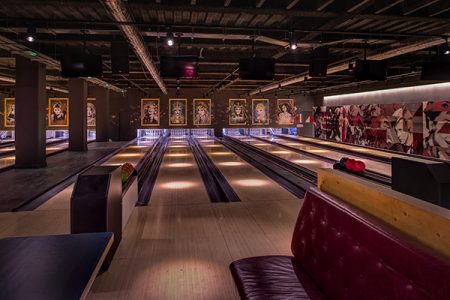 A wide ranging refurbishment, just completed, has created a spectacular brand new interior that pays homage to ice skaters and bowling lovers of decades gone by at Queens on Queensway, West London.

The venue, which comprises 45,000sq ft of comprehensively re-designed and refurbished eating, drinking, skating and bowling space, has been entertaining Londoners since the 1930s.

As part of the new Queens, the venue has also launched Jimmy’s Diner in partnership with renowned pop-up restaurateur Jimmy Garcia, established food writer, author and resident chef on ITV’s This Morning.

The new interior was created by Design LSM, with Heath Projects as the fit out contractors.

Steven Wragg associate of Design LSM said: “The previous interior was not cohesive and had become very dated, so a complete re-design was needed.”

“Initial works included two months of stripping out with layers of decor and redundant services being removed that had built up over the years.

The venue is entered on the ground floor, which features a reception including a ‘meet and greet’ area incorporating displays of vintage skating and bowling artefacts with the newly designed Queens logo prominently displayed throughout. Feature timber slats have been installed across the ceiling and along the bulkhead of a red and white staircase which leads down to the basement.

The bowling area is visible through a wall made up of vertical timber slats, glazing and vintage Crittall style windows which divides it from the adjacent new 75 cover restaurant, which incorporates banquette seating.

Space for the new restaurant was created by re-locating the original 12 bowling lanes further to the rear of the space.

Steven Wragg said: “Some of the services on this floor are exposed, to we visually camouflaged these by painting the ceiling grey and installing low-level lighting. All of the joinery is in light coloured birch-faced ply which stands out against the darker background.

Additional design features include a mixture of timber effect vinyl flooring, polished concrete flooring, tiled walls and a number of ceiling rafts. The space also includes a number of structural columns, most of which have been painted, with the remaining columns, which are located in the restaurant, having been tiled. Furniture is in a mixture of laminates and spray painted frames.

Steven Wragg said: “We have used quite a mixture of materials in the overall design palette, but as the space is large it can take this without looking too busy.

“Generally we have used track lighting, with feature bespoke vintage style lighting and further feature lighting projecting from the columns in the restaurant and bar areas. The walls to either side of the bowling lanes and within the reception area have been decorated with bespoke wallpaper featuring the new Queens logo.

“This was an important and interesting project for us,” he concluded. 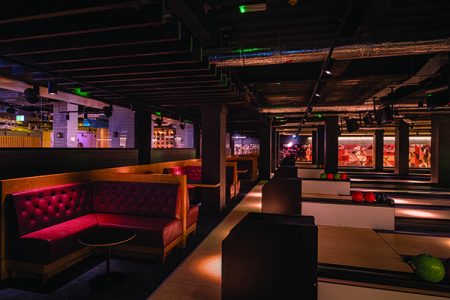 Founded in 1991, IFSE specialise in catering equipment, design and fit outs. The company creates exciting, innovative and versatile food service facilities for projects of all sizes. IFSE work across a wide spectrum of industries, from hospitality to garden centres.

With over 25 years of experience, IFSE have a long history in the catering market that has allowed the company to create strong partnerships with well-known equipment manufacturers such as Electrolux and UNOX.

The company’s role in the Queen’s Ice and Bowl refurbishment project involved working with Electrolux to ensure the right equipment was utilised in an innovative and future-proofed kitchen design. IFSE has also recently worked with SKY, London South Bank University, Swiss Re and The King’s Fund.

“The team at IFSE were excited to work on such a prestigious project, that would help Queen’s Ice and Bowl achieve their goal, through an IFSE led kitchen design and fit out.

“Every successful project starts with a good design. We pride ourselves on having a design team that have the creative vision, the technical knowhow and the tools to provide you with a well thought out and cutting edge solution for your facility.”