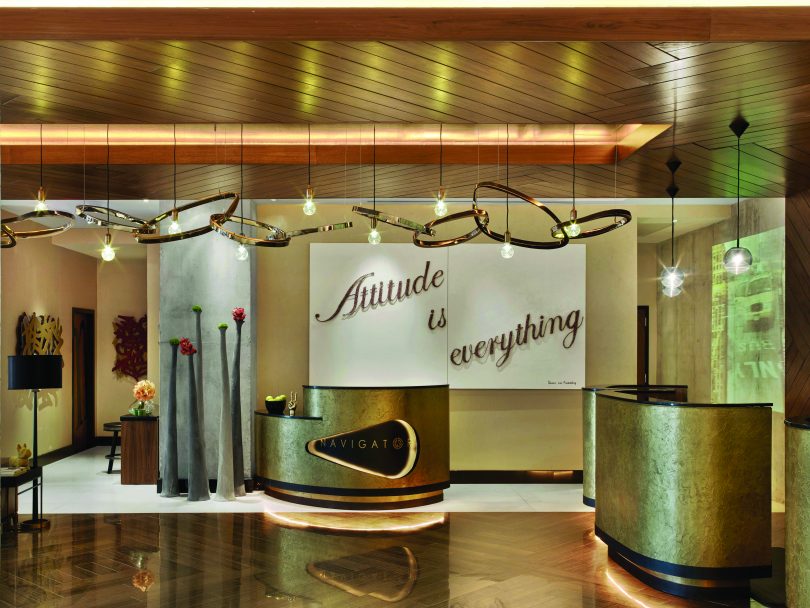 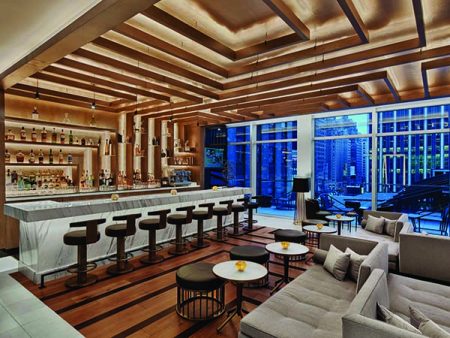 Renaissance Hotels’ U.S. flagship property is looking ahead to celebrating a year in operation, during which time it has captured the imagination of guests and critics alike.

Renaissance New York Midtown, marketed as New York City’s first ‘living’ hotel, welcomed its first visitors in March 2016. The property is comprised of sensational ever-changing digital experiences inspired by the fashion and artistic industries in the neighbourhood which are an integral and informative element of the design.

Roger Parent, Founder of Réalisations, talked to Premier Hospitality about the ground-breaking project:

“I had worked with Jeffrey Beers in the past doing projects for the MGM Group and he was involved with the Renaissance project. He gave me a ring to see if I would be interested in trying to help with the new technology.

“The hotel has a long corridor, about 140 ft. in length, which unites 34th street and 35th street. It’s not very wide and could be pretty boring if there wasn’t anything of interest in it. That triggered other requests from the client who wanted other interventions in the 6th floor lobby. Like all hotels, they were looking to be a bit different.

“Firstly, we created what’s called an ambient intelligence system in the corridor. We united a bunch of different sensors and based on the data being collected we can create, for example, a bubble of sound that follows a person walking through the corridor using 20 different speakers. The behaviour of people modifies the environment.

The sensors help create an environment that is not only immersive but very tuned in to the behaviour of people. In the middle of the corridor a virtual concierge can be found. 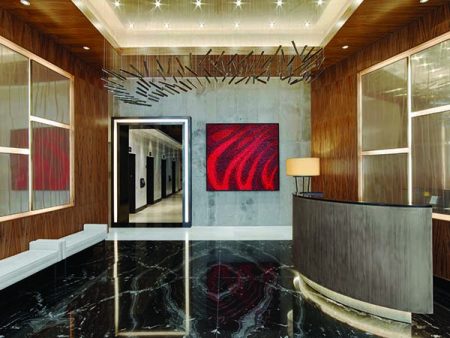 “As a result of the multiple sensors, we are able to trigger content based on the movements of users. On the ground are various options that link to suggestions on the wall. If users stand on the spot marked ’10 minutes’ then they will be presented with 9 potential destinations that are 10 minutes away.

“The information presented by the concierge is provided daily at 4am by Time Out magazine, giving us an idea of what’s fresh and new. Once they’ve chosen one of the wall options they then get further information on that particular activity.”

In addition, at the top of the hotel LED screens illuminate the skyline with a digital clock. Facing north and south, the clock’s imagery changes every second for a total of 86,400 images every day, enhancing the New York City skyline whilst adding another dynamic element to the hotel.

With regards the design inspiration for the hotel, Jeffrey Beers talked Premier Hospitality through the extensive thought process:

“We embraced the idea that the property would be a new world of discovery to guests looking for something unique and expressive. We brought elements of the Garment District, New York City’s iconic fashion epicenter, into the hotel’s interior design, peppering the experience for the guests with fun, unexpected moments of discovery throughout their stay.

“The design brief was that each Renaissance hotel offers a journey of discovery and inspiration, both on and off property. Specifically, the design scheme would draw inspiration from Manhattan’s energy and excitement of the artistic industries that surround the hotel, located in the Garment District.

“We began with a DNA board that reflected the property’s surroundings, as well as the brand’s common core values. Once we received approval on the DNA board, we were encouraged to be creative and original. The end result is a balance between design direction and creative freedom, and we are proud to say that Renaissance New York Midtown is a true example of Jeffrey Beers International design.”

The energy he talked about capturing can be seen in the juxtaposition of high-low design components, such as smooth millwork and polished marble against the rough texture of exposed concrete walls. Jeffrey also commissioned original works from contemporary local artists to integrate the local garment district into the hotel design.

Each of the 348 rooms at the Renaissance New York Midtown is spacious and has floor-to-ceiling windows giving stunning views of Manhattan’s skyline. A neutral colour palette helps create a relaxed and uncluttered atmosphere. The beds, either a king-size or two queen-sizes, are separated from the all-white Italian marble en-suite bathroom by a frosted-glass shower wall. 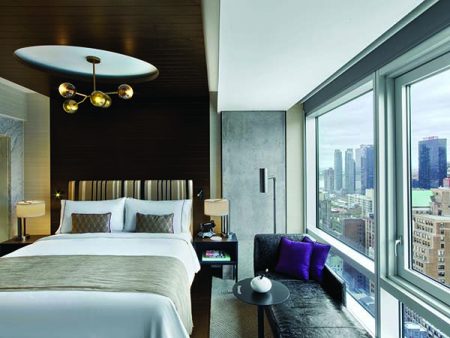 Dining within the hotel has also taken on a significant element with popular gastropub chain Rock & Reilly’s opening its first East Coast location on the fifth floor. With an 8,000 square-foot terrace, one of the largest outdoor terraces in New York City, and a retractable roof, Rock & Reilly’s NYC is a premium destination all year round.

Fusing the communal spirit of a traditional Irish pub with East Coast style, Rock & Reilly’s cocktails in particular have proved a huge hit. Sage Against The Machine, Welcome To The Jungle and When Doves Cry are just a sample of the creative concoctions on offer.

The digital heart of the hotel has also been connected to the pub, modelled on the secrecy of speakeasies in prohibition America.  When using the virtual concierge on the ground floor, otherwise known as the Discovery Portal, mimic the bar’s logo by covering your eye with your hand and a photo of you will be taken and sent to Rock & Reilly’s where you will receive a complimentary appetizer.

The flexibility of the hotel is extended to guests looking for a quiet space to work, read or meet up with friends. A bookshelf divider ensures the lobby lounge space remains connected to the wider hotel but at the same time helps to create a relaxing environment.

Glowing reviews from guests and critics have become the norm for the hotel during its inaugural year along with numerous award wins. A willingness from both the design team and client to create something never seen before was the drive behind the project and central to its success as Roger explained:

“The biggest challenge for a small company like ours is to find a team that wants to play. Fortunately, in this case we had a designer who already liked what we did, and vice versa so we could help each other out. We made sure that sensors and projectors blended nicely in terms of colour and texture. A close relationship with the designers helps get this done. Without that level of collaboration it becomes hard.

“I really enjoyed this project. It was something new for us and anything that’s related to ambient intelligence we really enjoy.”

“Having grown up in New York, I thrive on the fast-paced rhythm of the lifestyle here. I really wanted the design of this hotel to capture the vibrancy and creative energy of the city and to immerse visitors in the real New York. The marriage of luxe and industrial creates an elegant yet edgy look in both the public spaces and the guest rooms.”

Renaissance Hotels believes in defying business travel conventions for guests who crave unexpected experiences. With 160 hotels located in 35 countries across the globe, Renaissance Hotels make sure each stay is unique and unconventional. To ensure guests get the most out of their visit, local experts known as Renaissance Navigators are on hand to offer a guide to the surrounding area.

Réalisations Inc. Montéal designs, produces and communicates experiences to touch, amaze or surprise. Whatever the scope and nature of a project, Réalisations works from concept through to implementation to provide tailored solutions. In addition to working on the Renaissance New York Midtown, Réalisations was involved in designing and producing a two-and-a-half-minute video for the One World Trade Center Observatory.

Jeffrey Beers established Jeffrey Beers International in 1986. Based in New York, the firm has produced an array of diverse and high-profile projects that include award-winning hotels, restaurants, retail outlets, residences, offices and nightclubs. JBI brings experience, vision, and architectural precision to the creation of vibrant social spaces, winning numerous international awards in the process. 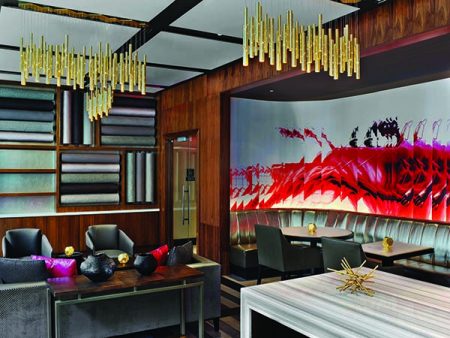 Archetype Glass specialises in the provision of innovative materials that enable architects and interior designers to reflect the identity and message of their clients through the use of glass as an interior design finish. The company has been in operation for more than 17 years and within this time has worked on a range of projects including Watergate Hotel-Rooftop Bar for BBG-BBGM; Hotel Allegro in Chicago for Simeone Deary Design Group; and Phoenixville Foundry for the Hankin Group, amongst others.

Most recently, Archetype Glass has been involved with the Renaissance Hotel Midtown NY for Jeffrey Beers International. Working on this project, Archetype Glass provided custom folded fabric art glass panels for the feature wall, which is located behind and opposite the main lobby reception desk.

“The designers at Jeffrey Beers International provided Archetype Glass with a challenge in fabricating a unique product that met the specific project design criteria. Our team worked collaboratively with the design team through several rounds of sampling to create just the right colour and style of art glass for the application.”

“At Archetype Glass we pride ourselves on our ability to reflect the designer’s vision while seamlessly transitioning from the design phase through the construction phase, ensuring the custom decorative art glass is delivered on time and within the project budget.”