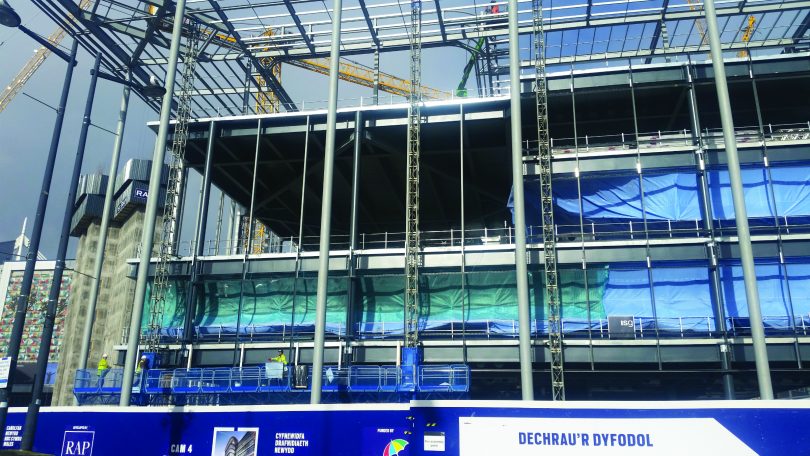 By the end of 2017 Cardiff-based fabricator Dudley’s Aluminium will have installed the majority of the aluminium façade, glazing and entrance doors at the new BBC Cymru Wales Headquarters at Central Square Cardiff, as part of a contract with ISG on behalf of Rightacres Property.

The project will see the local contractor demonstrating its expertise by installing more than 800 glass panes, some of which are as large as 3m x 3.1m in size and weigh more than half a tonne each, around the 180,000 sq ft site.

To complete the installation, the glass panes will be delivered to the site via a specialist transport system, before each double-glazed pane is lifted by vacuum suckers and manoeuvred by Dudley’s engineers into the curtain walling openings via the site’s tower crane.

With the first glass panes provided to the site by mid-February, Dudley’s will take several months to move each and every pane into their exact position; this technically challenging process  is a culmination of months of planning and organising between Dudley’s Aluminium and other contractors at the site.

Once completed, BBC Cymru Wales Headquarters will represent involvement with another landmark project at the Central Square development for the company.

Last year, Dudley’s Aluminium completed structural aluminium glazing for One Central Square, the first major new building on the Central Square development, the importance of which cannot be understated for local contractors

Managing Director at Dudley’s Aluminium Colin Shorney, said: “The Central Square development has been vital for local contractors like us. The UK construction industry has struggled in the last few years, but regeneration projects across Cardiff have really helped Dudley’s to secure key contracts that have supported growth in potentially difficult times.  To show that we have completed such iconic projects will be a real boost for our reputation across the UK.

“As a local company, there is a sense of real pride in securing these contracts. For visitors arriving in Cardiff by train, our work at the Cardiff BBC Cymru Wales headquarters and One Central Square might be the first impression they have of the city, and that creates a lot of satisfaction in our work. For locals too, these projects will provide a real economic boost for the city, so it’s great to be so involved with such an important project.”