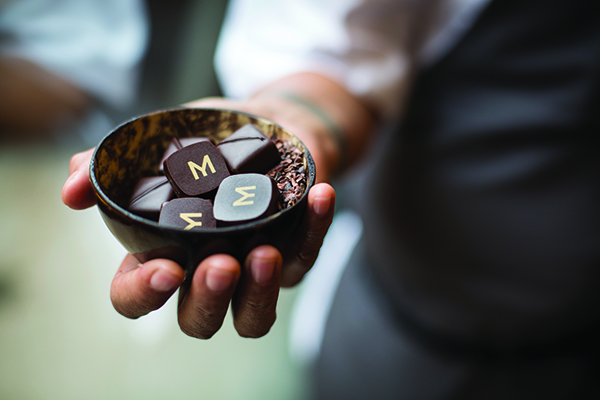 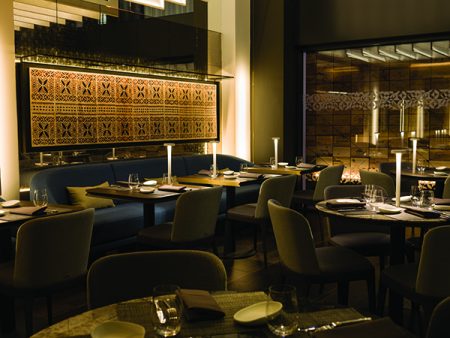 A first venture for Masterchef Professionals judge Monica Galetti and her sommelier husband David, Mere (pronounced Mary) is a new bar and restaurant just opened in London’s Fitzrovia, and featuring a beautifully designed split level interior, with the focus on relaxed, casual dining with no compromise on comfort.

Located on Charlotte Street, the venue includes a bar on the raised ground floor, which has seating for 20 guests for bar snacks, cocktails and drinks. The downstairs restaurant accommodates up to 64 guests.

The new restaurant is the couple’s first, and was established in partnership with Westbury Street Holdings (WSH).

The name Mere comes from the French for ‘mother’ and the Samoan word for Mary, Monica Galetti’s mother’s name.

Working as both designers and architects, Softroom worked closely with the Galettis in creating the impressive interior. Fit out contractors were The French Group.

Christopher Baggott, founding director of Softroom said: “The key point about the restaurant is that we knew that the food is of a very high quality given the heritage of the Galettis in working in a very fine dining environment. However they were very clear from the start that this was not the kind of environment that they wanted to create – preferring instead a much more relaxed, welcoming and accessible atmosphere to appeal to a much wider range of people. The style is therefore much more minimal and contemporary.

“The venue is situated on the ground and lower ground floor within a new building constructed behind a retained Georgian facade. The new building was still currently under construction when we initially got involved in the project, and was quite a challenging space to work with in that we had to utilise every square inch of available space in order to create all the technical and functional areas required, together with a generous sized circulation, restaurant and bar areas.

“The street itself has itself is lovely and has been known for good restaurants for as long as I can remember – as well as being located in the centre of an area occupied by advertising agencies and other types of business who appreciate good food.”

The venue is entered via a ‘minimal’ entrance through a stained oak front door and a small flight of steps. To the right is the bar space which is designed both for pre and post-drink meals, or for enjoying drinks only.

To the left of the entrance is a timber staircase with textured curved clay plaster walls leading down to the lower ground floor dining area.

Christopher Baggott said: “Along one wall of the restaurant we have included a series of banquettes, with a curved booth seat and small private dining area on the opposite side of the room, and free-standing tables and chairs down the centre.

“The flooring is in a rich, dark timber finish which ties the whole space together. We have also used timber wall panelling in the main dining area and around the lift that serves the two levels. The remaining walls are plastered and painted – although within the coffers of the ceiling we have used a specialist paint finish which has a slightly metallic quality to give depth and sparkle.

“We have also used quite a lot of integrated architectural lighting, such as on the walls behind the banquettes which are up-lit, as well as within the ceiling coves and on the columns. We regard this as a very important technique for bringing the room to life and also bringing more light into the basement.”

In addition to the traditional materials used, the colour scheme is predominantly a rich blue, enhanced by a large tapa cloth traditional artwork made from tree bark turned into paper, and decorated with geometric and symbolic elements.

Chris Boggott continued: “Another feature is a small basement level courtyard at the front of the building, and we have installed a double height 6 metre tall window extending from the bottom of the basement to the ceiling of the ground floor, connecting the two levels and bringing in natural light.

“Within the upstairs bar we have used painted plaster – again in the same deep blue, together with blue velvet upholstered furniture, and a specially commissioned carpet patterned with a wave design, creating a more luxurious, softer environment.

“We have also used antiqued mirrors to make the interior feel more expansive, and some blue silk panels along one wall to soften the space. There are a number of different lighting elements such as a ceiling grid incorporating lighting which turns the ceiling into an illuminated surface. Another key design feature is a series of metallic fins behind the bar which provide shelving to display bottles and are highlighted by small LED lights.

“I think that everyone is happy with the end result and the space works very well.” 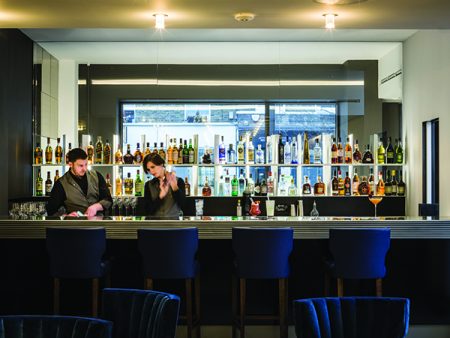 In over fifty years, Aram Contracts have worked with numerous clients across hundreds of projects in the hospitality, retail, commercial and education industries, both in the UK and abroad. Most recently, Aram Contracts has been involved in Mere, helping interior architects, Softroom with the venue’s loose furniture.

“ Mere is an exciting new restaurant for a high profile chef, by one of London’s leading design practices. We get satisfaction being involved with such an interesting project as this one.”

“We pride ourselves on our knowledge, experience and attention to detail, all focused on the number one objective: complete customer satisfaction.”

Benchmark are furniture makers who are widely regarded as the UK’s powerhouse of craft, with an unrivalled depth of knowledge of wood. The company has a 70 strong team in over 40,000 sq ft of workshops for timber milling, carpentry, veneering, spray shops, metalworking, and in-house upholstery, as well as design studio.

Benchmark were commissioned to make all the tables for Mere Restaurant including an extending table. Working with the palette of blues and greys they used a mix of solid fumed oak, silver forest marble and juparana granite set on patinated steel bases. The oak tables all feature a distinctive bespoke ‘bird’s beak’ edge and some are edged in brass.