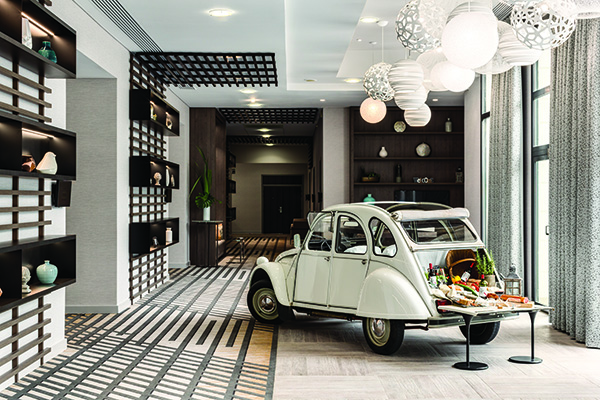 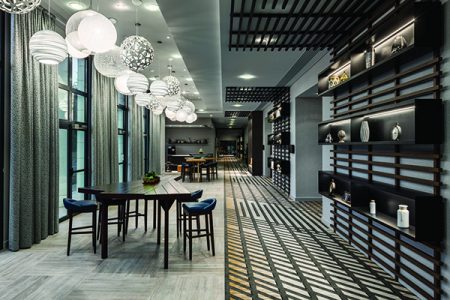 The Paris Marriott Charles de Gaulle has always been an ideal stop off for Paris travellers. Elegant, stylish and convenient, the four star hotel recently underwent a complete overhaul of its pre-function area, sales office, meeting rooms and ballrooms.

Since the project was completed in September 2016, Paris Marriott Charles de Gaulle has become hugely popular with businesses hosting small and large scale events. In addition to the revamped facilities, the hotel also boasts 300 bedrooms and suites, a restaurant, coffee shop, fitness centre and laundry service.

Virserius Studio, an interior architecture and design firm with offices in New York and Paris, was tasked with reimagining the space.

The project realistically began with the appointment of a new general manager at the hotel who felt the space needed a change. Having previously worked with Virserius Studio at a separate Marriott location, he asked the studio to bid on the project. Successful in this bid, the project began in January 2016 and took eight months to complete.

Covering 17,854 sq ft, the work was extensive but a major event planned at the hotel months in advance meant it had to be done quickly and without delay. A strict budget also required resourceful thinking with regards materials. Main contractor Voecker played a crucial role in this regard.

Furniture and flooring in the space has been custom-made, with a contemporary and sleek design. The pre-function area was previously dull and uninspiring but is now flooded with natural light alongside a warm and welcoming colour palette. Lighting spheres of varying sizes bring an element of surprise.

Notable in the meeting rooms are the neutral-coloured walls with writeable spaces, contrasted by the black with orange chairs.

The conference centre at the Paris Marriott Charles de Gaulle runs in conjunction with Meetings Imagined. The service offers a new way to create and communicate for events around the world, helping deliver impactful and inspired meetings.

Each meeting room features Wi-Fi and integrated AV equipment while the hotel’s proximity to Charles de Gaulle airport means travel to and from the airport’s terminals can be done quickly and efficiently. 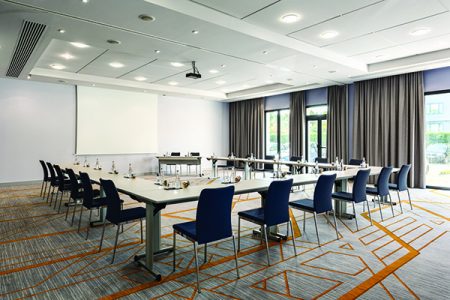 With 300 rooms and suites, accommodation at the hotel is spacious and surrounds guests with the comforts of home. A flat screen TV, coffee and tea maker and a large writing desk are provided as standard in every room. Guests looking for a little bit of extra room to stretch out can take advantage of the deluxe suites that offer separate living and sleeping areas plus a free breakfast.

Rooms are warm and inviting with a light colour palette and pillow top mattresses for a great night’s sleep before an early morning flight or important business meeting.

Food at the Paris Marriott Charles de Gaulle is centred on the restaurant and bar Le Trivium. Born out of a simple idea, Le Trivium revisits traditional French dishes to serve refined and honest cuisine. Fresh ingredients are delivered daily to offer meals with authentic flavours. Head Chef Yannick Jaouen renews his menu every quarter in addition to a monthly theme adapted to the season.

People without enough time to sample Le Trivium can at least stop off at the on-site “Recharge” Market for a snack and a drink as well as various health and beauty items. The Biscotti coffee shop serves Starbucks speciality drinks and delicious pastries.

Located in the heart of the green and charming village, Riossy-en-France, downtown Paris is only half an hour away via train. The Aeroville Shopping Mall, including 200 shops, 16 restaurants and 1 movie theatre, is a short 5 minutes away while Disneyland Paris and Asterix theme park are also close in proximity. A free shuttle operates to and from the airport every 20 minutes.

Marriott International is the world’s largest hotel company with more than 6,000 properties in 122 countries and territories. The company’s 30 leading brands include Le Meridien, Renaissance Hotels and Sheraton.