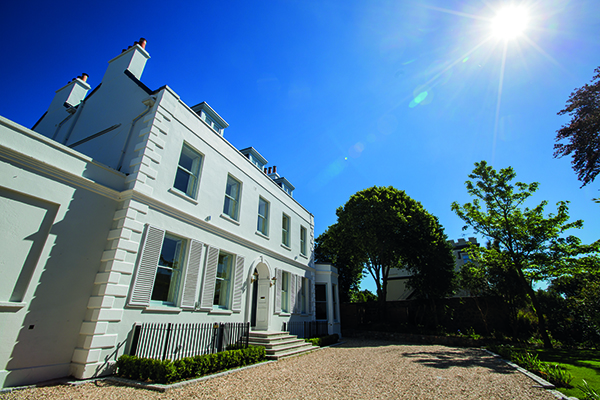 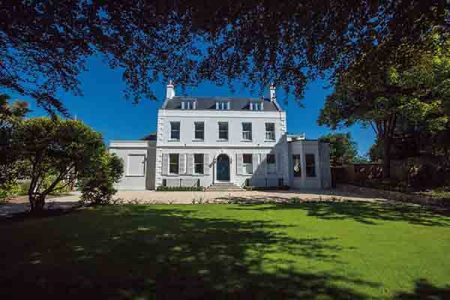 A two-phase project to restore seven apartments within an elegant Georgian property on Guernsey is heading into its final stages.

Originally built in 1802 for a wealthy merchant family, The Villa will soon feature seven contemporary, sensitively restored apartments in one of the prime property locations on the island. Phase One of the project began in May 2015 and encompassed work on five of the apartments as well as repairs on the building as a whole.

This work was completed a little over a year later in June 2016 and was followed by a successful period of marketing for each apartment. Phase Two of the project, which will see the final two apartments on the lower ground floor renovated, is currently underway and on course for completion in May.

Fuller Group, long time owners of The Villa, instigated the project. The Fuller Group have been based in Guernsey since the 1970s. The property investment and development company has a diverse portfolio with investments in the Channel Islands, mainland UK and the Caribbean.

“We’ve owned the building since 1996. It consisted of some fairly basic rented apartments up until 2015 when we began this project. Partly because some fairly major repairs were necessary on the building, we took the decision to significantly upgrade the seven apartments and make some alterations to their layouts with a view to selling them off. We did look at another scheme that would have involved converting the building to 11 one bedroom apartments but it was more viable to simply renovate the existing units.

“There were some issues with rot within the building and almost all of the exterior walls were taken back to the granite and treated.”

“The work has been very sympathetic to how the building would have looked previously. We reinstated a lot of the Georgian features and tried to emphasise and restore the historic and period elements. Externally, we didn’t make significant alterations to the footprint or to the elevations but what we did do was to reinstate the original shutters, improve the landscaping and installed railings more in keeping with the property as well as extensive general exterior repairs and decoration.”

Similarly, the interior of the building has been designed to blend the old and the new. Cornices and wood panelling for example, have been reintroduced throughout the building.

The largest of the apartments occupies the entire top floor boasting three double bedrooms, two bathrooms, a living room, modern kitchen and mezzanine storage space. Oak flooring has been used throughout and large windows allow for stunning views of the coast.

Moving onto the first floor, one of the apartments has been developed to house two double bedrooms while the other has one double bedroom with the option of either a single room or a study. Large sash windows allow for an abundance of natural light to flood the space. 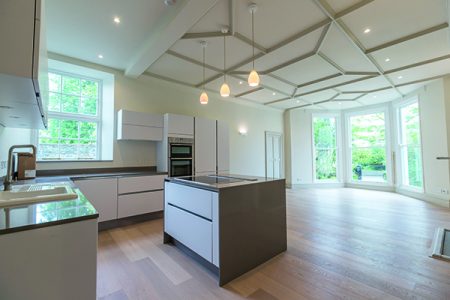 The final two apartments developed during Phase One are located on the raised ground floor level. Both feature two double bedrooms with en-suite facilities as well as generous floor space for a flexible layout.

A parking space is provided with each apartment whilst a professionally designed communal garden provides ample sun and shade in the summer months. The Villa is also within easy walking distance of the main town of St Peter Port.

The prominent positon of the building was just one of many rewarding aspects for Alex when working on the project. He reflected:

“It has been very rewarding as it was a building which was hidden and went largely noticed before development. We’ve had a lot of positive feedback because it’s a building people drive past and see on a daily basis.  I really think we’ve restored it to its former glory.”

“Compared to various new build residential schemes, this is quite unique. The apartments are very large with high ceilings and lots of natural light, something you rarely get with new builds.”