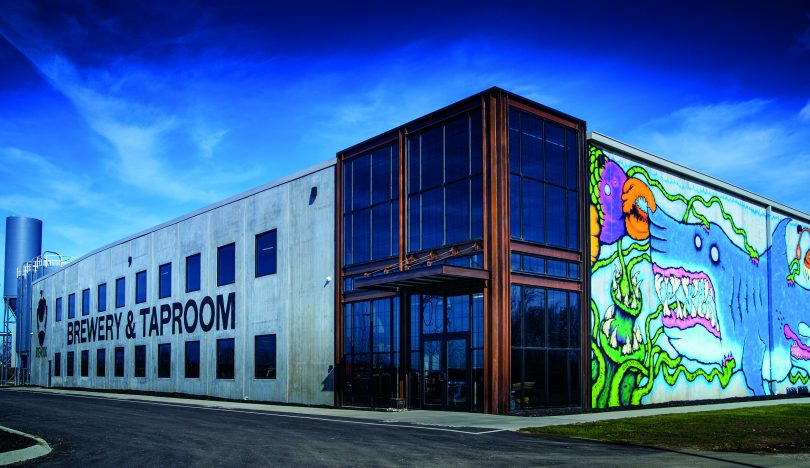 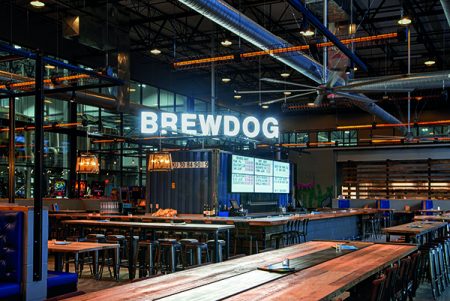 Founded by James Watt and Martin Dickie in 2007, BrewDog is the result of their love of craft beer and desire to share that love with others. BrewDog now operates 50 bars around the world with DogTap Columbus the latest venture.

DogTap Columbus is the company’s largest bar with over 300 seats available for customers to choose from. The 7,500ft2 bar and restaurant area has seating for 240 including an added 1,500ft2 mezzanine overlooking the bar that houses a further 50. At the front of DogTap, there is a 3,000ft2 patio for an additional 120 seating, featuring fire pits and a large steel structural trellis that carries lighting and a canopy.

The design of the space came from Design Collective with Principle Brent LaCount and his team – Kiley Maas, Intern Architect and Greg Bills, Architect – working as Project Designer and Architect. “They really wanted us to put a fresh perspective on the space whilst still keeping it in line with their ethos of Industrial, Utilitarian, Edge & Raw and Quirkiness,” commented Brent.

“We didn’t want the space to feel over designed, so we emphasised craftsmanship and use of materials to reflect the care and craft that BrewDog takes with their beers. The material palette we used juxtaposes warm reclaimed materials such as wood with the cooler grey and black tones of concrete and mill finish steel. The signature BrewDog blue was used as an accent with leather booths. Additionally, BrewDog’s in-house mural painter ‘Fischer’ created dramatic installations that tell the BrewDog story.

“One of our biggest challenges was to break down the large space into more intimate zones, whilst still creating an open and airy vibe. We also wanted two walls of 25ft tall glass, one looking into the brewery and the other a series of large garage doors that open up to the patio so we used a series of metal and reclaimed wood ‘shutter screens’ to stunt views through the space.”

The interior design also features sea elements that are inspired by BrewDog’s marketing and beer designs. Upon entry to the space there is a large feature table known as the ‘Captain’s Table’ with a ships wheel at the end as well as murals throughout the space with sharks and octopuses created by Fischer. The furniture and fixtures were designed and custom built by local craftsmen.

“Our metal sculptor even created large metal octopus tentacles that sit on top of the cellar. We also used a shipping container as the keg cellar to emphasize the ‘overseas’ relationship between Scotland and the USA. As Aberdeen, where BrewDog is from, has a large port and James Watt was a former ship Captain, they often utilise sea elements,” added Brent.

Alongside the bar and restaurant is a 2,500ft2 retail area that sells a range of alcohol such as craft beer, whisky, gin and vodka as well as merchandise like hoodies and t-shirts. DogTap Columbus will also have a gaming area made up of two shuffle board tables, and pinball and arcade machines.