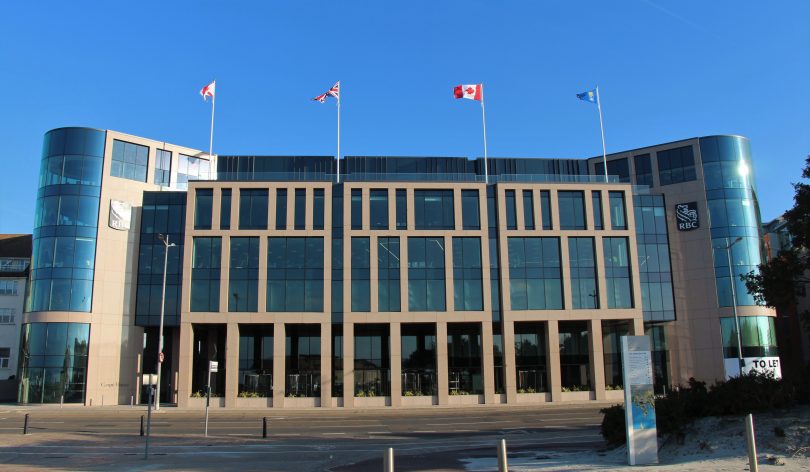 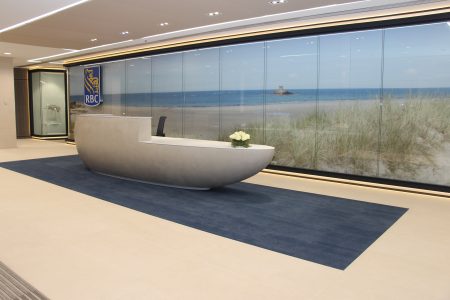 Providing a stylish, and superbly comfortable new working environment within an iconic new building in an idyllic seafront setting with spectacular views, the newly constructed Gaspé House at 66-72 Esplanade is now the Jersey headquarters of the Royal Bank of Canada (RBC).

The five storey building – the largest in Jersey – was developed by Dandara, with Waddington Interiors as interior designers for the scheme.

Peter Rose, head of Facilities Management at Royal Bank of Canada said: “The project was completed on time and on budget and we moved in to complete the client direct installations the following day after taking possession. All the client direct work, including completing the fit out, installing the IT and furniture and moving in all 750 of our staff was completed within the following six weeks. The project has been a great success and the executives are extremely happy.”

Speaking of the reason for the move, he said: “Our premises in Jersey were previously located in four buildings and we were looking to consolidate. We decided on Gaspé House and in August 2014 we signed an agreement to lease with Esplanade Developments Ltd, who are owned by Dandara, the developers.”

A 2 year programme then followed to design, construct and fit out the premises, which were designed and built as a combined category A and category B building, which was handed over on 31st October 2016.

Initially, the site was occupied by old buildings which were demolished and cleared to make way for the new scheme.

Emily Musker of Waddington Interiors, who was the senior designer for the project said: “There were a few guidance documents that we worked with in developing the final design. A key requirement was to create open plan staff accommodation, as well as a ground floor client reception, a fifth floor client suite and a staff café.

“RBC occupies 50 per cent of the ground floor of the building which incorporates the main client reception and back of house facilities, and has also taken 80 per cent third floor and all of the fourth and fifth floors. The third and fourth floors are dedicated to staff accommodation and the fifth floor is split between a client suite including an executive office area, staff accommodation for one department and a spacious staff café with an external terrace spanning the front of the top floor.

“For the internal layout, we referred to the British Council for Offices guidance as well as RBC’s own Global Design Document. We have also worked with RBC on previous projects, so we were also able to refer to this background knowledge of their requirements.

“One of our main design principles was influenced by the natural landscape around the building which is entirely glass fronted and is located on the seafront with superb views of the bay – and this was a key factor inspiring the natural shades of the colour palette which we used.

“A fundamental requirement of the internal layout was to provide future flexibility; so for the open plan floors we have introduced bench desking with all departments located alongside one another to allow for any future departmental changes.

“There is a central atrium in the building incorporating the lift shaft and the toilets, and we provided all the cellular accommodation wrapping around this, with the main open-plan desking positioned to allow the occupants to take maximum advantage of the natural light flooding in through the fully glazed exterior.

“All of the ancillary accommodation such as cloakroom areas, cupboards, tea points, kitchenette areas and other amenity spaces are located around the central core of the building, therefore leaving the main office spaces clear and open plan.” 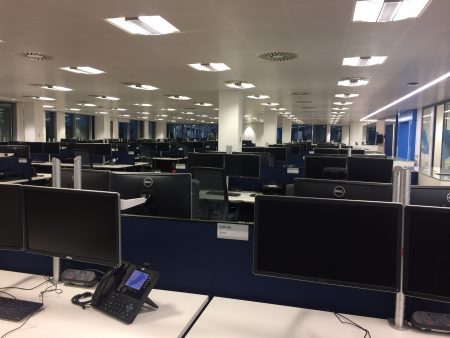 Peter Rose said: “We placed great emphasis on creating both a spectacular and a comfortable working environment, with every desk in the building being of electric sit/stand ergonomic design and the internal layout designed to keep all of the external glazing free of any obstructions, such as offices and meeting rooms.

“The biggest challenges of the project were the tight timescale and the fact that because we had a combined Category A and B development, we had to have the specifications produced more quickly than normal, because the tender packages went out as a Category A package and a Category B package to the contractors at the same time. The design team were under immense pressure to get the drawings ready to go out at the same as the Category A project package.”

Emily Musker said: “From a design point of view, the challenge was the sheer scale of the project. This is the largest office building to have been constructed in Jersey, with floorplates generally accommodating approximately 400 people. We needed to avoid making the floorplate feel crowded, so we used break out areas to divide up the space and set the amenity areas in easy access locations.”

“It was a real privilege to have been appointed on this project, and to be able to continue our relationship with the Royal Bank of Canada. It was fantastic to bring to life such a large scale project, and the great feedback from the staff has been very rewarding.”