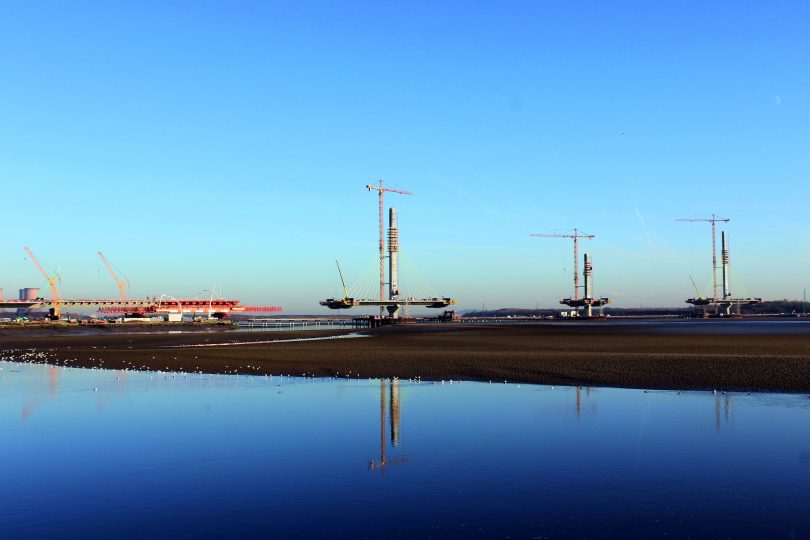 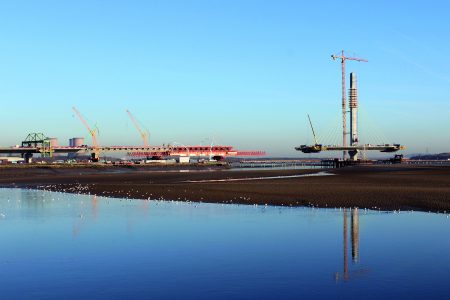 Trinity, one of the Mersey Gateway’s two giant bridge-building machines, has finished work in Widnes marking another important milestone for the project team.

The bright orange movable scaffolding system (MSS), a now familiar sight on the north bank of the River Mersey, cast the final central span of the elevated north approach viaduct in January.

The machine – essentially a giant concrete mould – has constructed 11 road deck spans, creating one seamless structure that sits on top of the supporting bridge piers that stretch across the saltmarsh.

Approximately 14,200m³ of concrete has been used during construction of the central road deck section, measuring a total length of around 715 metres.

Gareth Stuart, Merseylink’s Project Director, said: “This is another great achievement for the project. We now have the central section of the road deck complete and expect the entire north approach viaduct to be finished within the next couple of months. This key piece of road infrastructure is one of two elevated approach viaducts that will connect the new bridge to the main road networks in Widnes and Runcorn improving links between the two towns and the wider region.”

The approach viaduct decks are constructed in three phases. Once the central spans have been constructed by the MSS, a deck slab is built on top of the span, and finally the outer deck or ‘wings’ are built by a wing traveller machine to provide the full six-lane width of the approach road.

The MSS was specially made for the Mersey Gateway bridge. While most machines of this kind can only build bridge spans of up to 60 metres, Trinity was specifically designed to be able to cast spans of up to 70 metres, making it the longest MSS in Europe.

With its work now done, Trinity will be dismantled, reused and recycled.

It will take construction teams around two months to take the machine apart as they contend with approximately 1,200 components, 3,000 actual parts, and over 60,000 bolts.

Declan Cannar, Merseylink’s General Foreman in charge of the MSS, said: “It should take us around eight weeks to dismantle Trinity. The main part of the machine, the steel structure, will be transported to Slovakia, where it’s going to be used to build a bridge in Bratislava, while the casting cell will be recycled as this particular section was a bespoke piece specifically designed for the Mersey Gateway bridge.”

Trinity has proven to be a hit locally with many people following the machine’s progress via the Mersey Gateway webcam.

Councillor Rob Polhill, Leader of Halton Borough Council, said: “Watching Trinity in action has been remarkable. To see the road deck of the north approach viaduct progress over the past 12 months has been a privilege. Not many people across the world are able to watch such a magnificent piece of engineering machinery in action.

“The images and footage of Trinity will certainly be enjoyed for generations to come. I look forward to now watching our second MSS, Webster, make its way toward the south side of the bridge.”

Work continues on the north approach viaduct as the wing traveller machine constructs the outer deck to form the outside road lanes of the structure. The machine has built more than three quarters of the outer deck so far with construction of the viaduct anticipated to finish around the end of March.

The Mersey Gateway bridge is on schedule to open in autumn 2017.