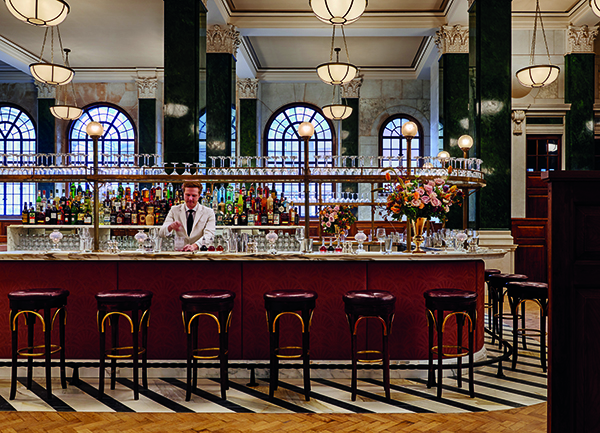 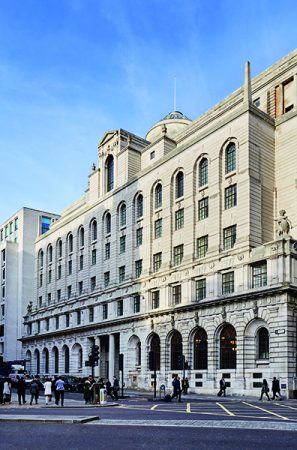 A major new ultra-stylish development in the City of London, The Ned comprises a sumptuous hotel, club and collection of restaurants – all within the historic Grade I Listed former Midland Bank building, which was designed by Sir Edwin ‘Ned’ Lutyens in 1924.

Located in Poultry, next to Bank Station, the £200m development, named after the building’s famous architect, has been carried out for Soho House & Co who joined forces with New York’s Sydell Group to create the scheme, which is scheduled to open this April.

Main contractors for the project to create The Ned are Ardmore, with EPR as architects.

Gareth Banner, managing director of The Ned said: “It’s a privilege to be working on this project, The Ned really has the ‘wow factor’. The outstanding architecture is so well preserved you can’t help but fall in love with it, as Nick Jones did in 2012, when he was shown the building for the first time.

‘The faded glamour of a 1930s transatlantic ocean liner was the starting point for the interior design of The Ned.

“Soho House lead designers Adam Greco and Alice Lund trawled the bank’s archives to find out what the building looked like in its 1930s heyday, and were inspired by the great ships of that era such as the Normandie, and transcontinental trains such as the Orient Express.

“The building’s listing protects both the interior and exterior throughout, with original offices being carefully repurposed into bedrooms, and the adjoining secretaries’ offices as bathrooms.

“Also protected by the listing is the chairman’s private lift up to his office, accessible via a side door in the main entrance’s vestibule. The lift has been reinstated to take guests straight to the original chairman’s office, one of five signature suites.

“ln the building’s Grand Banking Hall, accessible from street level, Lutyens original 92 green African verdite columns and hundreds of walnut panelled counters, have been restored, with the surrounding space remodelled to accommodate eight restaurants and bars, where more than 850 guests will be able to eat, drink and socialise. The ninth restaurant is on the roof.”

“The rooms’ Edwardian feel is enhanced by hand-finished details including silk tassel Victorian lampshades and bespoke floral wallpaper based on an original 1920s design.” 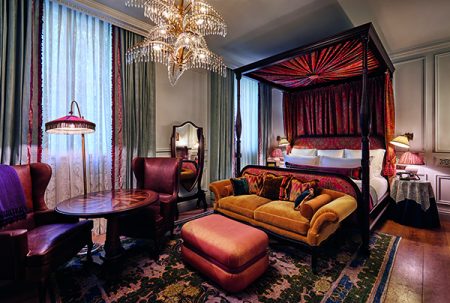 Guest rooms include Cosy Rooms of between 20-30 square meters, which are snug yet perfectly considered.

At 25-35 square metres, The Ned’s Medium Rooms are full of Art Deco touches in keeping with the era of the building. A heritage walnut king-size bed, tasselled chaise, richly patterned curtains and floral glass chandelier are complemented by the Jazz Age wall tones, a mirrored cocktail cabinet and velvet club chairs.

Each features a queen-size bed, and period touches such as a leather-top drum table, a pair of carved oak chairs and a dressing table.

Medium Heritage Rooms are located on the Grade I-listed 5th floor, and offer a taste of the building’s 1920s heyday.

In the lounge, there’s a glass palm chandelier, a pair of leather wingback chairs and a vintage bar cabinet. There’s also a mahogany-enclosed bathtub in the bedroom, inspired by Lord Bute’s tub at Cardiff Castle.

Each suite is furnished with a dramatic four-poster super king-size bed and elegant touches such as a vintage chandelier, velvet sofa and a Venetian glass mirror.

With an additional living area and generous proportions, The Ned’s 50 square metre Junior Suites are ideal for families.

Sleeping up to four people, they include a king-size bed and a separate vintage-style pull-out bed.

In the lounge, tassel armchairs and a velvet sofa sit beside a dining table and chairs – perfect for hosting friends or meetings.

Hallmarks of Lutyens’ signature style have been carefully preserved in the Large Heritage Rooms.

There’s a mahogany-enclosed bathtub in the bedroom, inspired by Lord Bute’s tub at Cardiff Castle and the marble mosaic bathroom features brass hardware and a walk-in rainforest shower.

Period details such as French-polished walnut panelling, an original 1920s marble fireplace and large dome windows – a signature design by Lutyens and the inspiration behind The Ned’s logo. There’s also a desk and dining space with a well-stocked cocktail cabinet. 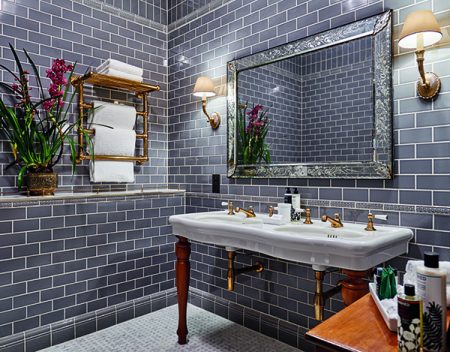 A doorway from the main bedroom leads outside, where there’s a 35 square metre terrace with a large dining area and lounge, the perfect spot for hosting guests.

Spanning two floors, the 85 square metre Duplex Suite is an ideal space for relaxing and entertaining.

The ground floor features a large, well-stocked bar and dining area for up to six people, with private access to a small terrace with views over Princes Street and the Bank of England.

Up on the mezzanine, there’s a velvet-appointed king-size bed and a roll top bathtub, whilst the marble tiled bathroom includes a walk-in rainforest shower

Eight restaurants sit amidst the grandeur of The Ned’s historic 3,000 square metre lobby, serving dishes from around the world.

Each of the restaurants has its own distinct space, naturally separated by 92 verdite columns and rows of Grade I-listed banking counters.

“Then there’s The Nickel Bar – a traditional American diner with a classic all-day menu serving burger, all day eggs, milkshakes and apple pie; Kaia – a modern Asian-Pacific-inspired restaurant specialising in healthy ‘bowl’ food including poke, and Lutyens Grill – an American steakhouse, with trolleys and gueridon service for members and hotel guests.”

Ned’s Club, available to members and hotel guests, offers a range of rooms and facilities. Ned’s Club Upstairs includes a rooftop, with spectacular 360-degree views across London, a pool, Canopy Bar & Restaurant, and Princes Street and Poultry Domes, which will host intimate bars.

Dominating the belly of the building is the bank’s original vault, with its twenty tonne, two-metre-wide door, which will house Ned’s Club downstairs and the Vault Room lounge bar. The vault contains over 3,000 stainless steel safety deposit boxes and inspired the design of Fort Knox in the 1964 film Goldfinger.

The Ned’s six Grade I-listed meeting rooms and two outdoor terraces on the restored 5th floor are among the building’s most elegant spaces. All benefit from natural light and have a dedicated reception area.

Each one of the meeting spaces boasts period features including walnut panelling and vintage chandeliers, as well as ample domed windows to allow for plenty of natural light.

Rooms range in size from 21 square metres to 165 square metres, and can accommodate between 4 and 200 people.

“By the time Sir Lutyens started designing the building that is now The Ned, its Poultry plot had hosted a Roman wharf, a 14th-century sheriffs’ prison and a church. The latter, St Mildred’s, was founded on the site in the 11th century and rebuilt several times, most notably by St Paul’s Cathedral architect Sir Christopher Wren – whom Lutyens idolised – after it was destroyed in the Great Fire of London in 1666.

“ln 1919, the Midland Bank was one of the largest in the world and had outgrown its London branch on Threadneedle Street. Mere feet from the Bank of England, where the Queen’s gold was housed, and in the centre of the City’s banking community, the historic site was the perfect location for its new headquarters.”

Co-lead designer, for the project Adam Greco said: “Lutyens was one of the UK’s most desirable architects at the time; he had just been knighted for his work on the Viceroy’s House in New Delhi.

“Hiring him to design the new Midland Bank would have been akin to enlisting a celebrity architect like Rem Koolhaas or Norman Foster today. His style blended classical and modern elements – it complemented existing buildings in the area but had more intricate detailing on the interior and exterior.”