Britain’s foremost artist and architecture-led institution, the Royal Academy of Arts (RA), is undergoing a transformative redevelopment to be completed in time for its 250th anniversary in 2018.

The work, designed by internationally acclaimed architect Sir David Chipperfield CBE RA, will incorporate a number of elements and overhaul the visitor experience, one of the many aspects that the redevelopment will result in. Supported by a grant of £12.7 million from the Heritage Lottery Fund (HLF), the plans will link Burlington House on Piccadilly and Burlington Gardens for the first time, uniting the two-acre site. The redevelopment will enable the RA to reveal the elements that make it unique, sharing with the public the historic treasures in its Collection, the work of its Royal Academicians and the RA Schools, alongside its world-class exhibitions programme.

The new public areas will also allow for more work by Royal Academicians and the RA Schools to be visible. The new spaces created as part of the redevelopment will also allow for changing displays of the 46,000 objects in the RA Collections to be shown with free access all year-round.

Burlington House and Burlington Gardens, two historic buildings which are part of the RA site, in particular will see major changes and will be linked. The Link Vaults, newly revealed spaces in the undercroft of the House, will also be utilised for the RA Collections.

Burlington Gardens will see the introduction of a Collections Gallery in its western wing and temporary exhibitions in its first floor south wing. A new gallery on the ground floor in the RA Schools will be dedicated to contemporary art projects by the students.

Externally, Burlington Gardens’ grand north façade will be cleaned and repaired to improve the appearance of the building.

Critical to the success of the redevelopment will be the unification of the RA site by the way of a Link Bridge and central route running through Burlington House to Burlington Gardens. The public path between the two historic buildings will be central to improving circulation throughout the RA site.

Learning will also be a key outcome of the redevelopment. A striking new lecture theatre with over 260 seats is being created in Burlington Gardens. Occupying the ground and first floors, original clerestory windows are being reinstated to allow daylight to flood the space that will be at the heart of an increased RA events programme.

In addition, a new Clore Learning Centre located on the ground floor of Burlington Gardens will enable participation in creative learning on site to expand three fold.

RA Schools students will see an improvement to their experience with the expansion of the campus through new project space, studios and a newly landscaped Schools Courtyard. The hope is that in good weather the courtyard will place for informal discussion and reflection for students away from the studios. 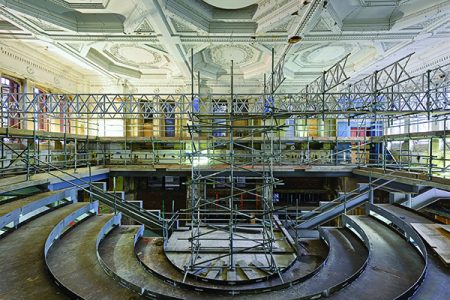 A number of alterations will also be made to help improve the RA visitor experience. The entrance to Burlington Gardens will be improved, restored and updated to create a more open and inviting environment in order to draw more people in from the newly-restored portico and street outside. Amenities like lavatories and a new cloakroom will also be updated. Similar improvements will be made at Burlington House.

“The project is an architectural solution embedded in the place itself, a series of subtle interventions which will add up to something very different. The big change is that the Royal Academy will have two entrances: a front door facing Piccadilly in the south and a new front door to Burlington Gardens, Cork Street and Bond Street.”

“This is an unprecedented opportunity to create the most animated cultural campus in central London that runs all the way through from Piccadilly to Mayfair.”

In addition to the HLF grant, the redevelopment has been supported by private individuals, trusts and foundations. Originally founded by King George III in 1768, the Royal Academy of Arts is an independent, privately funded institution led by eminent artists and architects.

Sir David Chipperfield CBE RA is one of the most significant British architects of his generation and highly acclaimed internationally for his successful projects located across the globe.

To follow the Royal Academy redevelopment’s progress and other plans to mark the 250th anniversary, please visit: https:// royalacademy.org.uk/ra250.