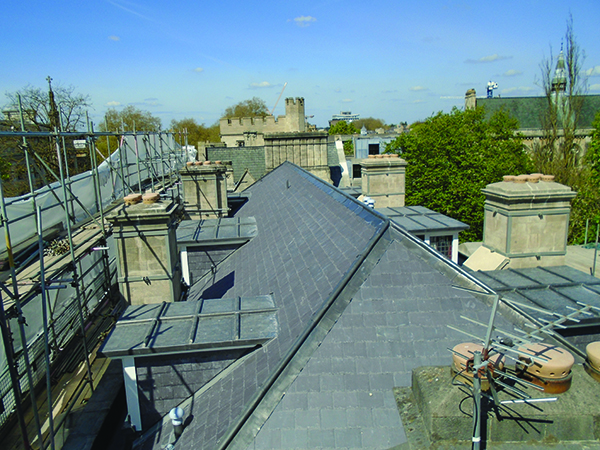 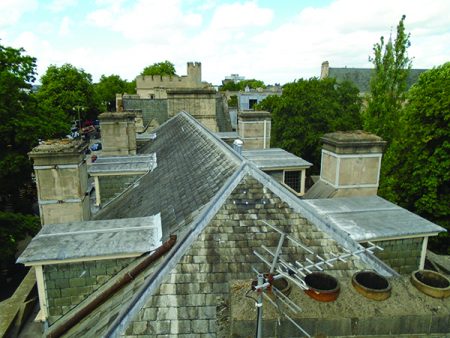 A prestigious project involving the re-roofing of the Grade II listed Warren Building, which forms part of Oxford University’s historic Balliol College, has recently been completed in a scheme described by the client as “a fantastic job.”

The project was carried out by Abbey Roofing Contractors, who were commended for their work on the scheme.

Neville Clarke, surveyor for the college said: “The Warren building, which is situated within a row of the college’s buildings, was constructed between 1912 and 1915. The slate and lead roof was in very poor condition as it had only been repaired piecemeal over the years – often by simply pouring on asphalt. Therefore, the whole roof needed stripping and re-covering including all leadwork.”

The project required listed building consent and building control approval and was carried out in consultation with the local Conservation and Building Control Officers. It was agreed to re-roof the building with Penrhyn slate tiles over an insulated felt membrane as the loft space beneath has rooms within it and would therefore have been very difficult to insulate.

Neville Clarke said: “Abbey Roofing has provided services for many years at Oxford University and many of its colleges. They had a very tight schedule in which to complete the works, which were carried out in winter. We therefore needed the protection of a temporary roof which was erected in January leaving a very tight timescale of 10 weeks for the roof works to be carried out which, nevertheless, was finished on programme before Easter.

“Abbey Roofing really excelled and did a fantastic job on this project. They are a reputable company specialising in roofing conservation and have previously won awards from the Lead Contractors Association for the quality of their work.”

He added that this project also included cleaning the stone facade of the building, as well as the adjacent Salvin building constructed in 1853, which was carried out by Wells Cathedral Stonemasons who, as always, performed superbly.

Balliol College was founded in about 1263 by John de Balliol under the guidance of the Bishop of Durham.

The establishment of the college came about following a dispute between John de Balliol and the Bishop of Durham, which erupted into violence and Henry III condemned Balliol’s behaviour. The Bishop had Balliol whipped, and imposed a penance on him of a substantial act of charity. This he did, by renting a property and creating a house of scholars, which was soon known by his name.

After John de Balliol’s death in 1268, his widow, Dervorguilla of Galloway (their son and grandson both became Kings of Scotland), made arrangements to ensure the permanence of the college in that she provided capital and in 1282 formulated the college statutes, documents that survive to this day.

Balliol has existed as a community of scholars on its present Broad Street site without interruption since around 1263.