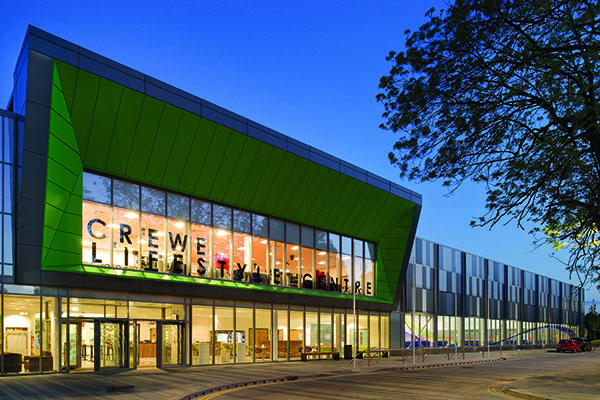 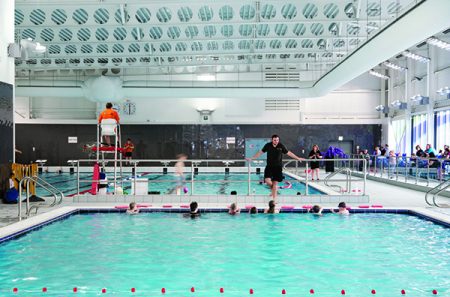 Crewe Lifestyle Centre opened its doors to the public just over a year ago and in the time since has become a hub for people in the town with combined leisure and community amenities in a single location. Its construction has now been recognised with a RICS Award (North West) nomination in the ‘Community Benefit’ category.

The £15 million, state-of-the-art facility officially opened at the beginning of April and is far more than just a fitness facility. It houses several customer-focused Cheshire East Council services, including the town’s public library and a community hub where families and residents with special needs can access vital day-care support. A customer service point also helps residents with queries about other Council services such as housing and council tax enquiries.

At the opposite end of the building, the leisure department is open early with swimmers able to enjoy a 25 metre, eight-lane swimming pool, while keep-fit enthusiasts can work out in a 100-station gym and fitness suite, containing the very latest in cardiovascular, body strengthening and functional training equipment.

A multi-purpose sports hall can be adapted for a whole range of sports from five-a-side football to indoor bowls, plus special events, exhibitions, functions and even weddings.

The two storey structure was designed by Pozzoni Architecture. Associate at the firm and project lead David Spoors spoke to Premier Construction about the work:

“We were originally approached to look at feasibility for a project of this type and it developed from there. Giving the centre an overarching tag, it is a holistic approach to leisure and care for Crewe on both a social level and a physical level.

“The actual form of the building was influenced by what’s accommodated within it. One end of the site is more visible to the public and is closest to the town centre. That’s where we located the pool so you can look in and engage with what’s going on. Things like the adult care and child services needed private, isolated and secure entrances so have been positioned at the quiet end of the site.

“It’s great to be nominated but for me it’s more important that the facilities work for the people using them. It’s great that people who are struggling are now supported by a building and space that residents never imagined would exist. I am happy they are responding to the building and have received it so well.” 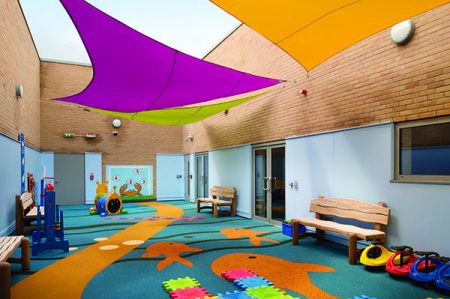 Crewe Lifestyle Centre replaced several outdated pre-war buildings in the town such as the Flag Lane swimming baths and other old community-focused buildings, which had become costly to run and were no longer fit for purpose. The leisure side of the centre is managed by Everybody Sport and Recreation, a self-governing charitable trust in charge of managing all the Borough’s leisure facilities on behalf of the Cheshire East Council.

The success of the building in bringing together combined leisure and community services not only gives the people of Crewe a modern destination but also provides a template for other councils across the country to adapt from.