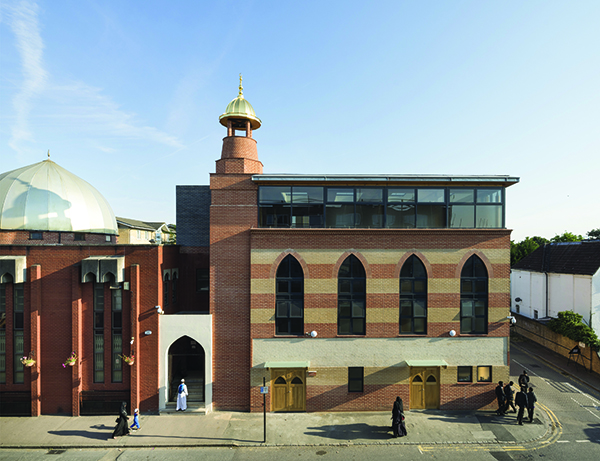 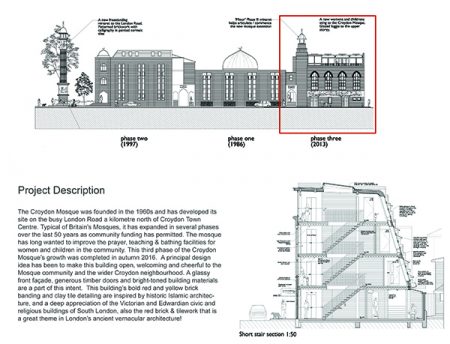 The Croydon Mosque and Islamic Centre recently opened the third phase in its development, a new Women’s and Children’s wing. The project was designed by the Peckham-based Benedict O’Looney Architects who have also extended and built the minarets on the Peckham Mosque. The new wing for the Croydon Mosque was built by the main contractors Unicorn and design work on this new wing started four years ago with the construction work completing in late 2016.
Founded in the 1960s, the Croydon Mosque has developed its site on Dunheved Road in three phases since 1970. Typical of British mosques, it has expanded as community funding has permitted.  The mosque has long wanted to improve the prayer, teaching and bathing facilities for women and children in the community. In addition to worship and bathing spaces, this building serves as a school and a meeting place for the wider community in the north part of Croydon.
Speaking to Premier Construction magazine, Benedict O’Looney, Principal at Benedict O’Looney Architects commented: “It has been very exciting project to design and construct this new wing. From the outset we wanted to do something really cheerful, bright and filled with daylight, and also create a building rooted in a traditional, pre-modern approach to detailing that referenced Islamic architecture and significantly South London’s impressive Victorian & Edwardian brick civic and religious buildings that we really enjoy in our studio”
Bold, banded brickwork in two tones gives cheer and a playful quality to the new wing’s front four storey façade. Traditional, even ancient Roman, architecture is referenced in the strong, structural clay arches to the four principal windows. To the east of this facade, the lift shaft metamorphoses into a lively minaret topped by a gilt zinc dome. This minaret / lift tower also helps articulate the junction between the new building and the main, domed, mosque prayer hall built in the 1980s.
The south or rear façade is clad in standing seamed zinc with four, tall, curtain-wall type windows. This bright metal façade is angled back to 70 degrees to deliver plenty of day light and sky exposure to the cluster of low-rise houses to the south of the mosque site. This zinc facade wraps around to the roof in one continuous sweep.
The interior of the Mosque is filled with daylight – where possible daylight has been introduced from above. The ground level ‘wudhu’ (bathing area) is fully tiled, another inspiration from London’s Edwardian public buildings. A continuous band of patent glazing floods daylight into this space at the site’s southern boundary.
The main prayer room also is animated by generous daylighting. Four large skylights are combined with the curtain wall glazing to the inclined south façade to create a bright and cheerful space with fine views across Croydon. Benedict O’Looney notes “we wanted to create a comfortable, tactile interior space that was welcoming and fun to inhabit. Toward this we structured the top two floors of the building in glue-laminated timber which is very much on show. We loved the mellow tones of the timber structure, and these timber elements are held, and ‘decorated’, by galvanized steel connectors that give structural bases and capitals to the timber columns”.
Between the glu-lam structure timber structure, off white painted timber slats and white brick lined flank walls give a fine grain to the prayer room interior.  A double height space to the south side of the new prayer hall gives spatial drama to the prayer hall and helps with air movement and a sense of community and togetherness when the hall is full for religious festivals. 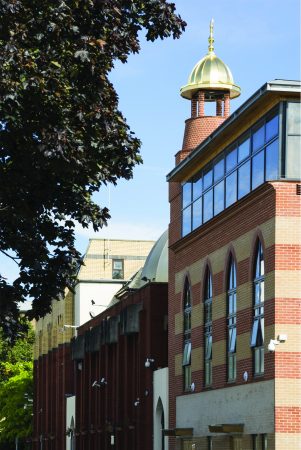 Robust, natural and tactile materials and generous daylight are intended to make feel at rest and comfortable to this building’s interior, which seems to have worked as this new wing is popular with the whole Mosque community.
Benedict adds “we chose materials and detailing that seemed timeless, were robust and low maintenance. This is a building that looks forward and backward. Its use of prefabricated timber elements and modern glazing help form a modern, low energy, naturally ventilated building. Traditional tiled arches and polychrome banded brickwork are a clear and affectionate reference to historic religious and civic architecture. We were determined to make a building that the mosque users would enjoy and would be an interesting and attractive building, welcoming to the wider Croydon community”.