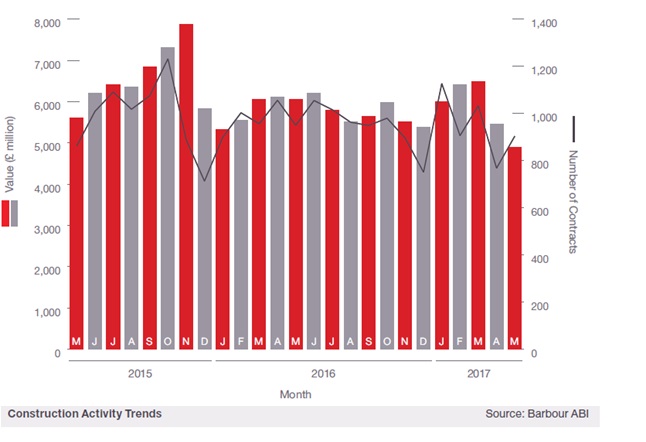 As the country fell into general election fever across May, overall construction contract figures on the month dropped to their lowest value for more than three years.

According to the latest edition of the Economic & Construction Market Review from industry analysts Barbour ABI, £4.9 billion worth of construction contracts were commissioned in May (see figure 1.1), a £500 million decrease on the previous month and a noteworthy £1.5 billion drop when compared to May 2016.

Looking at construction across the UK regions, it was the South West that led with 18 per cent of the UK’s construction contract value, largely thanks to a £400 million mechanical and engineering contract at the Hinckley Point nuclear plant project based in Somerset, which was awarded to Balfour Beatty. Interestingly London, which usually sits firmly at the top of the regional rankings for market share, only accumulated nine per cent of the UK’s total construction contract value in May, with five regions contributing more value than the capital.

Looking across the sectors, only Residential and Education saw construction contract values increase in May compared to April – both increases were only minimal though at 1.9 and 0.9 per cent respectively. The remaining sectors all saw decreases with Infrastructure hit hardest, falling by 22 per cent on the month and by almost 40 per cent compared to twelve months ago.

Outside of the Hinckley Point contract, some of the biggest projects awarded in May include; £300 million Blyth offshore wind farm in Northumberland, £130 million halls of residence at the University of Hull and the luxury Vincent Tower hotel in Liverpool valued at £70 million.

Commenting on the figures, Michael Dall, Lead Economist at Barbour ABI, said: “While the pre-election jitters will have no doubt affected these recent figures, many of the sectors – such as infrastructure and medical & health – have been performing below par for some time now, with the industry being too heavily reliant on residential building performing strongly each month.”

“What also stood out in May was the lack of major projects awarded in London, which saw a big drop in its construction contract value contribution in May, down to 9 per cent. The biggest projects on the month were spread sparingly across the country and with London’s modest contribution, its clear this held back the figures last month.”