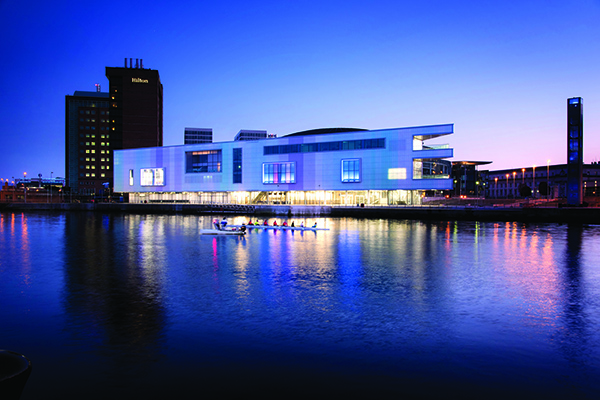 Belfast Waterfront – Project is the pride of Belfast

A project involving the construction of a substantial extension, doubling the event space of Belfast Waterfront, has been shortlisted in the Commercial and Tourism and Leisure categories of the RICS Awards 2017 Northern Ireland.

The project has enabled Belfast Waterfront to accommodate a wider range of events and deliver a brand new event experience for up to 5,000 delegates in the heart of the city.

The clients independent design team (WH Stephens) used Todd Architects to create an exemplar design for the extension. McLaughlin and Harvey, the design and build contractor worked in partnership with McAdam Design to deliver the project.

Built to a BREEAM Excellent standard, the new extension includes a 4000m² purpose built conference facility on three levels, and seamlessly integrates with the existing facility.

The extension incorporates two interconnecting multi-purpose halls spanning over 2,500m². Hall 1 can be used as one large 1,805m² area, or sub-divided into four smaller spaces, whilst Hall 2 can also be divided into two separate halls or used as one 702m² space.

This complements the existing Belfast Waterfront which also has a 2,000+ seat auditorium, a 380 seat studio, gallery and bar areas.

Construction works included the installation of 253 450 diameter CFA piles, with the extension being constructed around an independent steel framed structure linked into the concrete frame of the original Waterfront building.

The main feature of the façade is the coloured polycarbonate cladding. This lightweight façade was used to cantilever the first floor over the external River Lagan walkway to achieve the required floor area for exhibition space.

A key challenge of the project was the fact that the Tourism Northern Ireland and European Regional Development Fund funding offer was conditional with an expenditure deadline of 31 December 2015, and this limited the construction programme to 16 months. 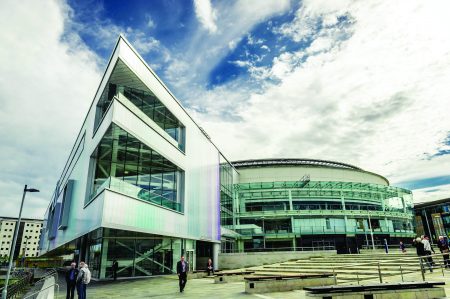 Works began in October 2014 and the project was completed and handed over to Belfast City Council in January 2016, achieving the funding deadline. The venue reopened for business on the 29 April 2016.

The expanded facility is expected to generate a £100 million return for Belfast over a five year period, with 55,000 additional conference delegates expected in the city annually by 2020 – double the current number.

Belfast Waterfront is on track to meet its 2020 goals after exceeding its first-year target by hosting 34 major conferences which generated over 50,000 delegate days and an economic return of £21m for the city.

It is also anticipated that the project will help create an estimated 1,500 new jobs in the retail, hospitality and tourism sectors.