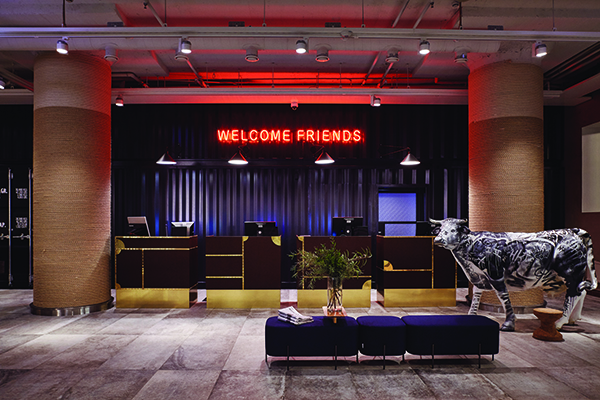 Interior Architects Fyra, a Finnish interior design company, has been working on a renovation project for Radisson Blu, creating a bold, raw style for the people of Helsinki. Here is an insight into the project. 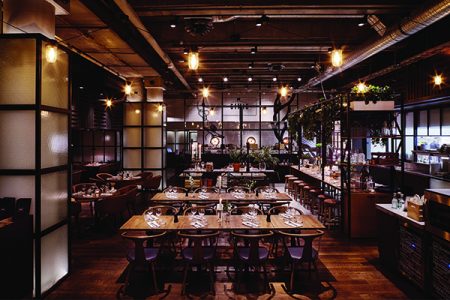 In the downtown Helsinki harbour area, in the lobby of the Radisson Blu Seaside Hotel, the success of the Radisson Blu project became apparent when witnessing the first clients pouring in, looking around and then proceeding to take out their phones and start snapping photos – A confirmation that the room boasting a raw, gutsy interior, had become the new living room.

The architectural design of the hotel renovation was carried out by Finnish interior design company, Interior Architects Fyra. Fyra worked meticulously on the details refining the very essence of the concept of the hotel. The location in the harbour, against the backdrop of an old shipyard combined with the urban downtown Helsinki vibe, was brought into the details of the hotel interior.

The reception desks resemble old travel trunks and behind is a wall built out of a shipping container. Black bookcases are filled with old binoculars, globes and books, and people gather around wooden tables to soak in the ambience and enjoy their lunch. The colourful bar has a graffiti ‘This is Helsinki’ sprawled across it.

One of the biggest challenges of the renovation project was to figure out how a hotel can provide service for a substantial number of customers whilst avoiding the feeling of a huge place serving large crowds. For example, in the restaurant this was solved by dividing the space into smaller areas. There could be 200 clients having lunch at one time, yet it would feel as if you were sitting in one of Helsinki’s trendiest little cafes.

“Tomi Peitsalo, the Regional Director at Radisson Blu Finland, stated in the kick off meeting that our project will be a success when someone loves it and someone hates it – as long as no one remains indifferent. It was truly amazing to work with a client who had such a bold vision,” said Eva-Marie Eriksson, Interior Architect and partner at Fyra.

The hotel consists of three buildings. The lobby and some of the rooms are situated in a building that used to be a storehouse for cheese for dairy company Valio. There are more rooms and a restaurant located in a wing built in the 1990s and, in addition, there is a building from 1940 that accommodates the conference facilities as well as the rest of the hotel rooms.

The historical background of the buildings situated against the backdrop of the old shipyard is depicted by the insightful use of subtle details. For example, there is a guestbook in the lobby in form of a full-sized cow – artwork designed by graffiti artist Anselmi Oksman.

The interior design of the rooms and the style of the building complement each other. The rooms in the former laboratory facilities have a softer colour palette whereas those situated in the wing have a Scandinavia feel with a fresh, crisp colour scheme. The rooms in the old cheese warehouse have a slightly rawer edge to the décor. All rooms are cosy, comfortable and have a welcoming atmosphere designed purposefully by leaving out the wow factor.

God is in the details – and restroom door latches

Radisson Blu Seaside Hotel is a large hotel consisting of 349 rooms. The few rooms still in renovation will be finished in summer 2017. The last two years of redevelopment have included both large scale plans as well as finding solutions to thousands of practical puzzling questions and millions of details. One such detail was finding just the right kind of restroom door latches.

“Many details forced us to consider where this or that can be done until we realised that it is possible and that it will be done. For example, for a long time the plan for the sign above the reception desk was to say ‘Reception’. In the final stages of the project we came up with the idea of the sign saying ‘Welcome Friends’, adding a more personal touch and reflecting our service philosophy. The idea of a rough and raw urban luxe has been executed masterfully,” said Roni Huttunen, General Manager at Radisson Blu Seaside Hotel. 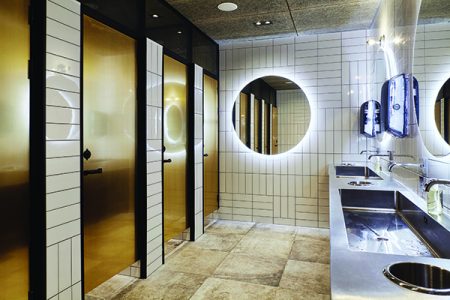 Since 1994, Adea has manufactured high quality, functional furniture. The family-owned company’s determined policy in making its own collection has borne fruit and Adea is now known for its timeless and contemporary collection of furniture.

Adea has been a long time supplier of furniture to homes, hotels, offices and have even furnished the new wing of the Finnish Parliament building, providing the prestigious site with more than one thousand seats, sofas and chairs. Most recently, Adea was involved with Radisson Blu Seaside Hotel.

Working on Radisson Blu Seaside Hotel, Adea provided the hotel with its Mr Jones range of sofas. Mr Jones is a contemporised version of the archetypical British Howard sofa with neater, stricter lines. In spite of its compact dimensions, Mr. Jones’ level of comfort is out of this world.

“We were honoured that we were chosen for this project and look forward to working with Radisson SAS in the future with other projects.”

“At Adea, quality and design are as important to us as customer satisfaction. We want to be a trusted partner in all things we do and we hope that all the guests of the suites enjoy the shapes and comfort of our sofas as much as we enjoy making them.”

For more information about the company, please visit: www.adea.fi.