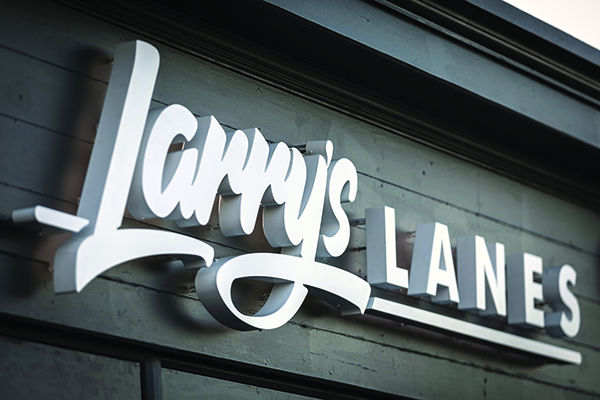 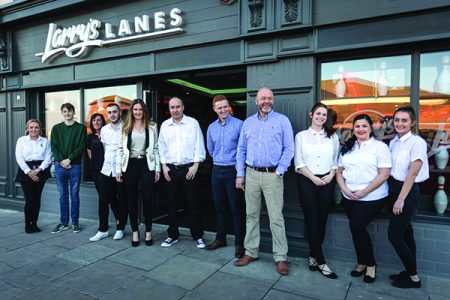 A loan from Yorkshire Bank allowed owners Rubicon Pastimes to completely rebuild and fit out the premises on The Front and install the bowling alley, a bar and food area. Food available from the diner-style menu includes a range of burgers, BBQ Chicken wings, sharing trays and light bites and is served from 12pm until 9pm every day.

It is hoped that the new attraction will bring up to 50,000 additional visitors to the area a year.

Lloyd added: “It is not just another Hollywood Bowl or chain of bowling alleys that you see up and down the county. It is bespoke and a lot of thought has gone into the interior design and we have gone the extra mile and created something extra special. It’s not only a family fun environment  but we have tried to pitch this at all age groups so families, young adults and the silver generation who are just as important.”

Work on the development started in November 2016 and was completed for an Easter 2017 opening. Work was undertaken by Simon Bartlett Interiors.

“It all works well,” said Lloyd. “From the carpet tiles that we chose to the handmade furniture and the fabrics that we used, to the reclaimed wood on the bar front and the Marvel Comic artwork that we have put up. We have gone far beyond what was expected for a Bowling alley at the seaside.”

Rubicon Pastimes also owns a similar family entertainment centre in Scarborough, which was purchased in 2013 with funding from Yorkshire Bank. The company has been banking with Yorkshire Bank for 60 years and employs over 60 people with a turnover of £4.6 million a year. It is understood that Larry’s Lanes has created 15 new jobs for the local community.

Lloyd said: “Because the town didn’t have a bowling alley anymore, we are pleased to be able to offer it back to the town.”

Since its opening, Larry’s Lanes has received a number of positive reviews online.

One online review reads: “Great fun and not a great cost. I’ve been a couple of times and everyone around us – kids and grown-ups – all enjoyed themselves to the max. I’d recommend anyone to go and make a night of it.”

Another says: “Place is awesome. Kid’s loved it; staff were great and very efficient. So nice to see a place like this in Hartlepool. Will definitely be visiting again.”

“We visited and had a fantastic day! Great value for money and the food is to die for. Lovely staff and really well organised. We’ll definitely be returning,” said another.

Lloyd commented: “We have had a very good response. We get a lot of families in and we seem to be doing well at a weekend so it appears to be a weekend treat for families and young adults. We have had a few teething problems but nothing that we can’t iron out. It has been a positive first two months trading.”

Lloyd concluded: “This development is crucially important to the site at Seaton Crew. We have been trading since the late 50s/early 60s and I am of the mind that my company and the site always has to develop. I won’t stop here. Next year or the year after, I will be looking at something else to add to what we offer so it is crucially important as a starter. It will anchor the whole site into a more of a destination to go to without a doubt.” 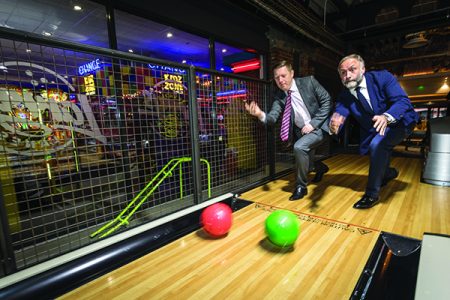 “It’s always very exiting working on Simon Bartlett’s projects and Larry’s Lanes was no different. Simon’s original ideas, often developing as we go, are fantastic opportunities to showcase the skills of our team!”

Founded in 1985, Damian himself operated from a small workshop on Wallsend High Street. As the company has grown, Damian Cronin Ltd has operated from both the UK and Ireland and now has one of the region’s largest in-house specialist joinery manufacturing facilities.