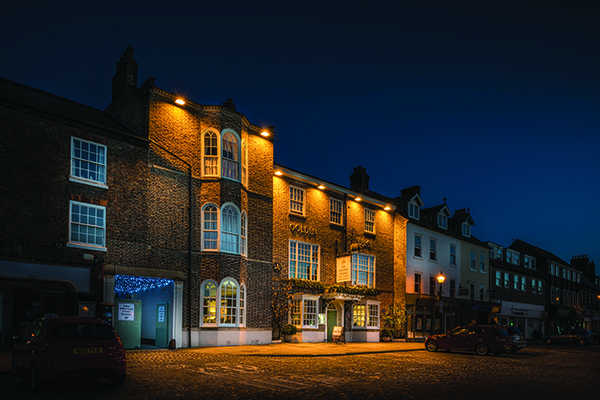 The hotel has been an Inn since Tudor times and is one of the oldest Coaching Inns in England. The hotel has been visited by royalty and rogues alike, serving travellers for nearly four hundred years. Set in the heart of Herriot Country, The Golden Fleece is ideally placed for exploring the Yorkshire Moors and Dales, areas of unspoilt beauty, of which both locations were used regularly for the filming of Heartbeat and James Herriot.

Acquired by The Coaching Inn Group in 2015 the refurbishment of the site has also included the introduction of a new outside dining area, complete with pizza oven.

Speaking to Premier Hospitality magazine about the refurbishment, General Manager Neil Doogan said: “The first lot of refurbishment work was undertaken between November 2016 and February 2017 and that is when we refurbished all of the main bedrooms. That work included full rewiring, plumbing, reflooring and decorating, so it was a top to bottom refit of all of the rooms.

“We then closed the hotel on 5 March 2017 to do the ground floor and public space renovations and we reopened on 19 May 2017.

“The front of the hotel is very similar to what was there before so that was more of a redecoration and a reclassification of what each room was used for.  Our old bar became a private dining room, our restaurant became a coffee shop and bar and one of our function rooms became our new eatery. We also created an outdoor space from an old workshop, which now has an outdoor dining area and pizza kitchen.”

As part of The Coaching Inn Groups £20 million expansion programme, The Golden Fleece has also benefitted from structural repairs, as well as the refurbishment.

Neill added: “One of the challenges we experienced was the fact that the building is listed. That meant that everything had to be done according to regulations. Also, the outdoor area was another challenge. It was such a significant change for the site so that took a bit of time and planning to complete.”

Following the hotel’s relaunch, the refurbishment has received positive feedback from guests.

Neil commented: “It has been very successful. The difference in footfall for business has been astronomical and the feedback from a lot of the local people has been very positive. The Coaching Inn Group did a good job in keeping everything in character, so overall it has been a functional refit but has kept the character and feel of the building.”

Now that the refurbishment has been completed, the hotel is hoping to refurbish a few remaining rooms that are located in the mews building in the near future.

The Coaching Inn Group currently operates 13 hotels in Yorkshire, Leicester, Lincolnshire, Northampton, Gloucestershire and Wales and offers the very best in food, drink and rooms. Each of the historic Inns has each earned themselves a great reputation within their local communities, as well as the industry. The company aims to double the size of its estate by 2019. 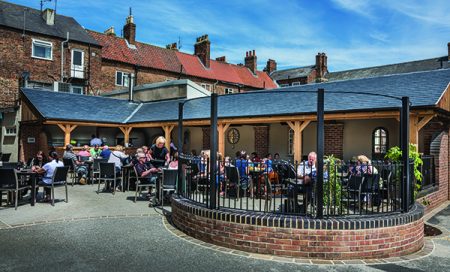 Currently celebrating 18 years in business, Darren Epton Builders specialise in quality joinery and building projects for the construction industry. The company works alongside an array of prestigious clients, including The Coaching Inn Group, and has previously been awarded the Best Domestic Conversion of a Building by Boston Borough Council.

“We have worked on most sites within the present estate, with the Golden Fleece being the latest completed project. We supply the building and bespoke joinery services as required to each project and the joinery carried out is site specific, with a common theme carrying through from job to job.

“With the Golden Fleece project we were responsible for the structural alterations required internally, which then carried through to the re-fit. All joinery was bespoke and made by ourselves.”

“It is a pleasure to be involved with the group on the conversions and re-fits, from turning tired public areas of buildings into the current style, bringing in new clientele and returning customers.

“The personal contact we have with our clients is what is important to us and we are continually striving to make the last project the best yet.” 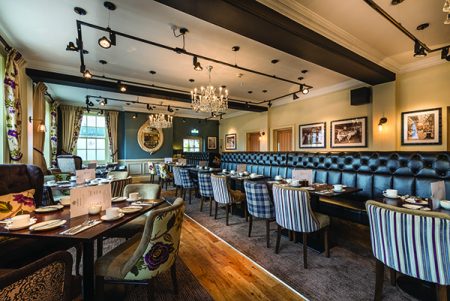 Tony Skinner specialises in design and build projects including outdoor rooms, extensions, landscaping, paving and driveways. Based in Boston, Lincolnshire, the family run business has 35 years of experience in the industry.

Made up of a team of highly skilled workers, Tony Skinner puts great value in training young people and giving them a start in the construction industry. During the course of its time in operation, Tony Skinner has built a large portfolio of clients, many of whom have returned with more work. The Coaching Inn Group is an example of this, with The Golden Fleece the latest in a long list of projects.

“I have done 5 hotels for The Coaching Inn Group – The White Hart Royal, The Admiral Rodney, The Old Bridge, The Three Swans and The Feathers. From the information they give us we are able to design to their requirements. After that, they don’t need to worry about the project because I quantity survey it myself and then my lads do the work.

“The relationship is built on trust and it’s great that we are able to maintain it. We pride ourselves on being precise and giving the customer what they want. It’s all about the customer.”