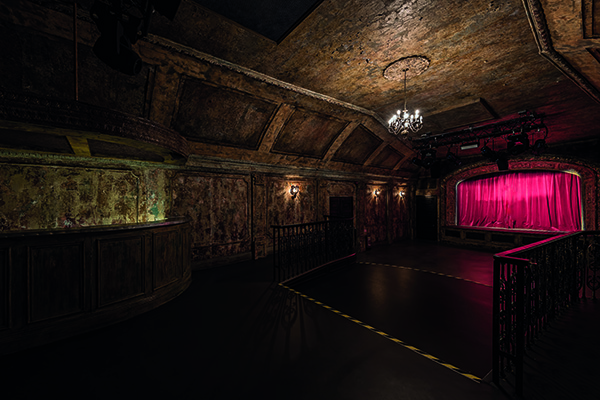 Designers align have worked with Ben Lovett of Mumford & Sons on Omeara, an exciting new 350-capacity live music venue, bar and performance space in Flat Iron Square in London’s Borough, which has now opened its doors to the public.

“I’ve been playing and putting on shows in London for my entire adult life,” Ben Lovett commented. “Without the grass-roots music venues in this city, the band and I simply wouldn’t have achieved what we have, so I have a lot to be grateful for. Over the last few years, London has lost so many of its brilliant music establishments and I want to do what I can to try and reverse that decline.”

Omeara is being run by operating company Omeara London, together with independent record and live promotions label Communion, both of which are owned and managed by musician Ben Lovett of Mumford & Sons, who has personally overseen the project. The new 9,000 sq ft venue, featuring a music venue, a separate live performance area, four bars, a green room, two artist dressing rooms and a roof garden, is part of a new, larger development called The Low Line, comprised of a pedestrian walkway, lined with common spaces and local businesses, based within and alongside redeveloped railway arches that link Waterloo to London Bridge.

Omeara opened with a gig by Chrissie Hynde with her legendary band The Pretenders, who commented “I wish all gigs could be like this.”

The venue will house live gigs, focusing particularly on emerging talent and, in the longer term, a wider array of programming, from indie club nights to talk events, comedy, burlesque, magic and much more besides.

Nigel Tresise of align commented: “What’s particularly great about this project is that the interconnected arches create opportunities for drama and zoning whilst still functioning as an overall venue. Not only are all public areas fully accessible, but full thought and care has been given to the whole suite of facilities, from the new-build courtyard block at the front, where the box office, toilets, merchandising closet and roof garden are located, to the mezzanine ‘green room’ artists’ area. There’s no comparison between this and the typical pub-basement type small venues you usually find in London. Ben is not only a very hands-on client, but also has a great eye for detail and has really put a lot of time and consideration into every aspect of the venue.” 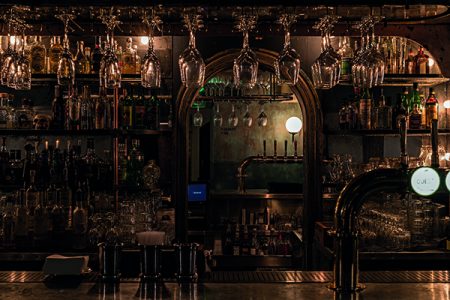 “We’ve been involved with this arches development for quite some time now”, explained Nigel Tresise, Director and Co-founder of align, on the origins of the consultancy’s involvement in the project, “having first been commissioned to look after the architectural co-ordination and design of the overall development, via landlord Benj Scrimgeour of Flat Iron Square Ltd.”

“There’s over 20 years of clubbing history in these arches, but talk of putting a purpose-built music venue into the arches only started to crystallise four years or so ago”, Nigel Tresise continued, “although Network Rail wanted to pursue other options at the time. Then, in late 2015, an approach by Ben Lovett put the idea back on the table and Flat Iron Square Ltd, who by then had the headline lease on all the spaces in the development, happily agreed to sub-let three large arches to Omeara London – with the venue and company named after the location of its front entrance on Omeara Street. align were then directly appointed by Ben Lovett to create the venue.”

Omeara now encompasses three arches within The Low Line, including a new-build, 80 sq m courtyard extension with roof garden, located at the Omeara Street entrance to the site. All three arched spaces are then linked via internal connecting doors, located halfway along each inner wall, with the outer two arches also featuring their own dedicated entrance on the arched, Low Line side of the site. In principle, the first arch – The Siding – will be used as a separate space, for events, exhibitions and pop-ups. The central arch houses the main, 350-capacity live music venue, with the stage at the north end of the space and raised, terraced viewing platforms to the side and rear for disabled customers, as well as a lift to the upper bar and roof terrace level and small dedicated bar to the rear of the space. The final arch houses the main bar on both the ground floor and mezzanine levels. Whilst the bar links directly to the music venue, it also has its own signage and access from The Low Line end so it can function as a standalone bar.

Overall, the interior treatment evokes a once-glorious past, with a fairly beaten-up aesthetic, including reclaimed elements such as decorative panels made up of wrought-iron table legs. Flooring is appropriate to each zone, with a range of treatments from concrete and timber to marmoleum and ceramic tiling.

“It has been a hugely collaborative project in order to realise Ben’s vision of ‘distressed Havana’’ for the interior look, Nigel Tresise added, “with many elements of the decoration curated by branding specialists Studio Juice, who have worked with Ben on a number of Mumford & Sons projects. Once we had created the main venue space, we handed over to legendary set designer Dick Bird whose ornate stage proscenium and wall finishes were implemented by Scott Fleary Productions. Bar joinery specialists Fantastic Bars created the bars, whilst Cantilever supplied  the specialist bar equipment and Nancy Nicholson created the incredible distressed paint effects for the walls, with layer after layer of paint added and then partially-removed to achieve just the right look.”

The main entrance for customers is on Omeara Street, where the new-build courtyard block houses the box office, cloakroom, merchandising closet and toilet block, which further extends a former signal box. A stair to the right of the entrance leads up to the roof terrace on the upper level, as well as through to the upper level of the bar, with the mezzanine level of the bar also served by a separate stair leading directly from the ground floor.

Band access is via a dedicated door on The Low Line side of the venue, leading up to the artists’ suite. An office is also included within this mezzanine space, with views directly down onto the bar. The bar below is mostly a standing space, but also has five seating bays, featuring bespoke U-shaped banquette seating, plus two further booths located just beyond the artists’ suite on the left and stock area on the right, where there is loose seating and some final further seating on the galleried area, back on the Omeara Street side of the space.

Architecturally, aluminium-framed glazing was already place, closing off the end of the arches facing The Low Line, but doors had to be moved around and additional fire exits added, once planning approval was achieved. New internal structural steelwork was inserted to support all the new interventions, from galleries and mezzanines to the new stage system. The greatest design challenge of the project, however, lay in the creation of an effective acoustic lining system, in order to isolate the venue from the low frequency noise and vibrations from the busy railway viaduct track directly above. There was also extensive acoustic modelling done to ensure noise from the roof terrace will not affect residential neighbours. Having been achieved successfully, this intimate new external space will offer fantastic views over the nearby Shard and is a great addition to London’s night-time scene. 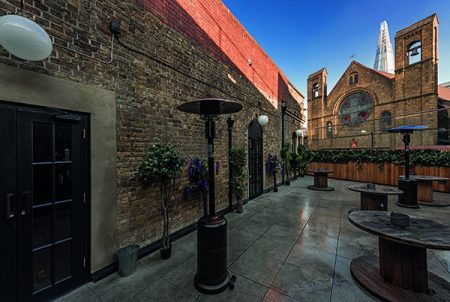 align
align is an interior architecture and design agency, based in Farringdon area of London and co-founded by Directors Nigel Tresise and Gurvinder Khurana. The company works with clients from a wide spectrum of sectors, including music, media, finance, technology, charity and the public sector and firmly believes that this cross-fertilisation of influences and experience is what keeps the studio fresh, open and creative. align is a fast-moving and fast-growing agency and prides itself on its flexibility, willingness to listen and service culture.

In 2015 align was named ‘Best Small Design Studio’ at the London Design Awards, underlining all the advantages of being a tight team, from the bespoke creativity of its design solutions to the properly personal relationships it creates with clients. In 2016 the company won the ‘Best in Workplace Interior Design’ at the Corporate Livewire Architecture Awards and in January 2017 it was named ‘One to Watch’ by FX Magazine.
www.aligngb.com / @aligngb

Flat Iron Square
Flat Iron Square, opening this October, where music, food, entertainment and culture will blend together across seven railway arches and Devonshire House, a Grade II listed building in the heart of London’s Bankside.

The newest stop on London’s Low Line will host Ben Lovett’s live music venue OMEARA, which promises a wide array of programming from indie club nights, to talks, comedy, burlesque, magic and much more besides. Two permanent restaurants of Where the pancakes are and Bar Douro, which have set up home in Flat Iron Square’s arches.