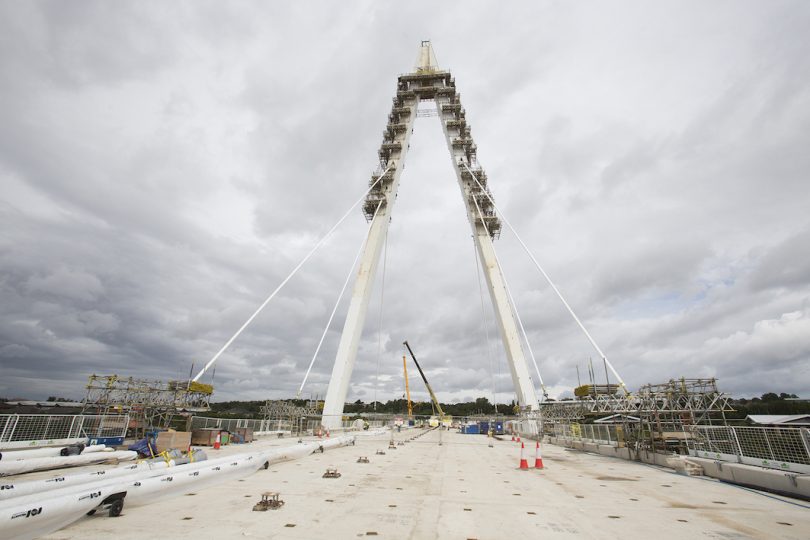 The New Wear Crossing in Sunderland will undergo a huge transformation in the coming weeks as the 28 cable stays are fully installed.

Initial work to install the first 12 cable stays, which connect the bridge deck to the pylon and have a white protective sheath, has already been carried out, with the remaining cables being attached in the coming weeks.

It is likely to take structural engineering company VSL International a further six weeks to install the cables and tension them to around 50 percent of their working load.

Once the cable stays are in place, Sunderland’s new bridge will take on a different look and will begin to appear close to completion.

However, the project team will then need to carry out the road finishing works on the deck, and begin the process of installing the lighting system on both the pylon and the bridge deck.

Only when most of the works are complete can the cable stays be tensioned to 100 percent, enabling the blue temporary steel towers in the river, which currently support the deck, to be removed.

Sunderland City Council Leader Cllr Paul Watson, said: “The installation of the cable stays is one of the final pieces of the jigsaw as we near completion of Sunderland’s new bridge. Bit by bit, we can really start to see just how impressive the new bridge is going to look.

“Watching the bridge come to life during the past two years, and witnessing some of the engineering feats involved, has been tremendous. The teams working on the project are doing a terrific job.

“Some of the facts and figures around the cable installation process, including the strength and capacity of the materials used, are quite incredible.”

There are 28 cable stays in total, each comprising an outer sheath and containing a collection of wire strands that go together to make up an individual cable. They will be anchored into the pylon and into the outer sides of the bridge deck.

Each cable will be made up of between 44 and 77 individual strands, varying in length from 52m to 165m, depending on its position on the deck. The longer the cable, the more strands there will be.

Each strand is made up of several individual wires, which combine to form a diameter equal to that of a penny and which can support up to 28 tonnes, although they will only be tensioned to support seven tonnes on the New Wear Crossing.

One single strand on its own is strong enough to lift four fully-grown male African elephants, whilst just three strands could lift the Space Shuttle.

During the installation process of each cable stay, the protective sheath, or tube, is lifted into position first and then four individual strands are threaded through the tube and tensioned to secure the cable stay in place.

Once all of the cable stays are installed in this way, then the remaining strands will be threaded through to complete the process.

Once complete, 120 miles of strands will have been used, which, if laid end to end, would stretch, as the crow flies, from Sunderland to Liverpool in the west, or to Lincoln to the south east, or to Falkirk in the north.

Once the cable stays are fixed into position, they will be adjusted and tensioned just enough to lift the bridge deck off its temporary supports so that they can be removed.

The cables enable the bridge deck to adjust to its optimum shape to accommodate the loads from the traffic and the bridge itself. The cables transfer the bridge loads up to the pylon before they pass down into the foundations in the centre of the river.

Stephen McCaffrey, Project Director for FVB joint venture, created by Farrans Construction and Victor Buyck Steel Construction to deliver the project on behalf of Sunderland City Council, said: “It’s easy to look at the outer sheath for the cables and not realise the strength and complexity of the technology that sits within them.

“Fixing these cables is a hugely specialised job and it will be our core focus for the work on the bridge itself for the coming weeks.”

The installation of the cable stays is one of the final major milestones of the project, which got underway in May 2015.

The New Wear Crossing is Phase Two of the Sunderland Strategic Transport Corridor, which aims to improve links between the A19 and Sunderland City Centre and the Port of Sunderland. It is on track to be complete in the spring of next year.

It will cross the River Wear between Castletown and Pallion and will improve transport links around the city, open up land for regeneration along the south side of the river, and help to create jobs.