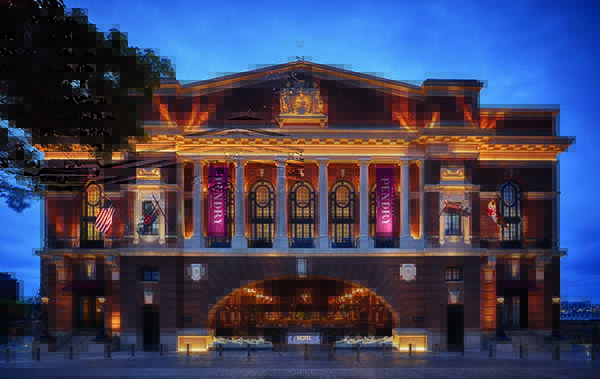 Just opened by Pendry Hotels is the magnificent new Sagamore Pendry Baltimore, incorporating one of the city’s historic buildings and located in the Fell’s Point neighbourhood.

The project was carried out by main contractors Whiting Turner Contracting Co.; architects were Beatty Harvey Coco and project managers were Sagamore Development. Mechanical and electrical consultants were Vanderweil Engineers and structural consultants were Whitney, Bailey, Cox and Magnani.

Lead designer for the scheme was Patrick Sutton. 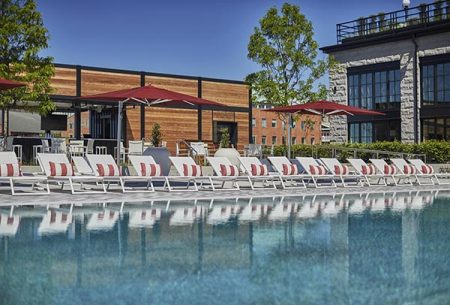 The hotel incorporates an existing historic Beaux-Arts brick building in limestone, with a grand archway leading to the appended Recreation Pier – which was once active commercially. The pier juts out into the waters of the Chesapeake Bay.

The original building is located on the pier and is surrounded on three sides by water – which represented a considerable challenge for the contractors, as access to the site was restricted.

The building was constructed in 1914 by the City of Baltimore as a commercial pier building housing the Harbourmaster’s Offices and was restored to serve as the hotel entrance containing the main lobby, restaurant and bar on the ground level, with office space on the upper levels.

The original ballroom was restored and modernised to serve as the hotels banquet facility, along with the addition of two meeting rooms.

The guest rooms and suites have been designed to evoke the feeling of being in a captain’s berth on a ship, with rich mahogany cabinetry and nautical brass details. The roof at the centre of the hotel has been removed to expose an artfully landscaped courtyard featuring a 12ft Botero horse sculpture as its centrepiece.

The end of the pier incorporates an infinity edged pool, cabanas and pool bar. The promenade in front of the hotel was also upgraded.

In addition to its incredible architecture, Sagamore Pendry Baltimore is home to the following food and beverage concepts:

Rec Pier Chop House – a prime Italian Chop house overlooking bustling Thames street, which is devoted to time-honoured Italian cooking. Presented by NoHo Hospitality Group’s acclaimed chef Josh Pickard, Rec Pier Chop House is centred around a progressive and seasonally focused menu, devoted to simple but classic culinary offerings that have made Carmellini one of the most notable names in Italian cuisine. 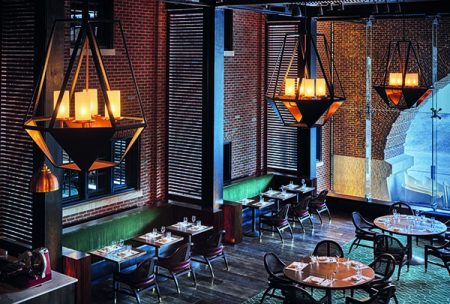 The Cannon Room – in a nod to its storied past, The Cannon Room – an American whiskey bar – derives its name from the mighty cannons which were situated beneath Recreation Pier for centuries. An 18th century cannon unearthed during the pier construction is permanently on display within the space.

The setting houses an intimate bar and fireplace featuring a fully curated menu of bourbon, rye and premium whiskey and featuring Sagamore Rye, a newly crafted whiskey from the spring at Sagamore Farm.

The Pool – the hotel’s private pool deck – offers a seasonal bar and grill with outdoor dining and lounging, set at the water’s edge. The deck is perched at the end of Recreational Pier with an open air panoramic view of the Baltimore Harbor, marina and city skyline.

Patrick Sutton said: “The completion of this historic project has been incredibly rewarding, not just for our company but what it means for the city of Baltimore and its ongoing renaissance. It has helped put Baltimore back into the national spotlight in a positive way and we are thrilled to play a part in it.”

A large-scale project such as the Sagamore Pendry Hotel plays to Royal Contract Lighting’s strengths: manufacturing facilities in the United States and China enable the company to source the highest-quality raw materials at the best price, shorten manufacturing time, and provide superior service. These capabilities meant that the dozens of fixtures required by the historic hotel renovation could be produced to exacting budgetary and scheduling requirements.

Sagamore Pendry Baltimore was developed in collaboration between Montage International and Sagamore Development Company, owned by Kevin Plank, founder chairman and CEO of Under Armour. Plank is making significant developments across Baltimore, through strategic investments managed by his privately held company Plank Industries, the parent company of Sagamore development.

The Fell’s Point neighbourhood is recognised as one of the best-preserved historic areas in the country thanks to substantial revitalisation efforts that have protected the historical integrity of the neighbourhood.

“We are thrilled to open our second Pendry Hotel and first east location for the brand in Baltimore with our partners Kevin Plank and Sagamore Development company,” said Alan J. Fuerstman, founder, chairman and CEO of Montage International. “While paying homage to the property’s rich heritage, Sagamore Pendry Baltimore brings new design and culinary offerings to Fell’s Point, coupled with the service culture that Montage International is known for.”