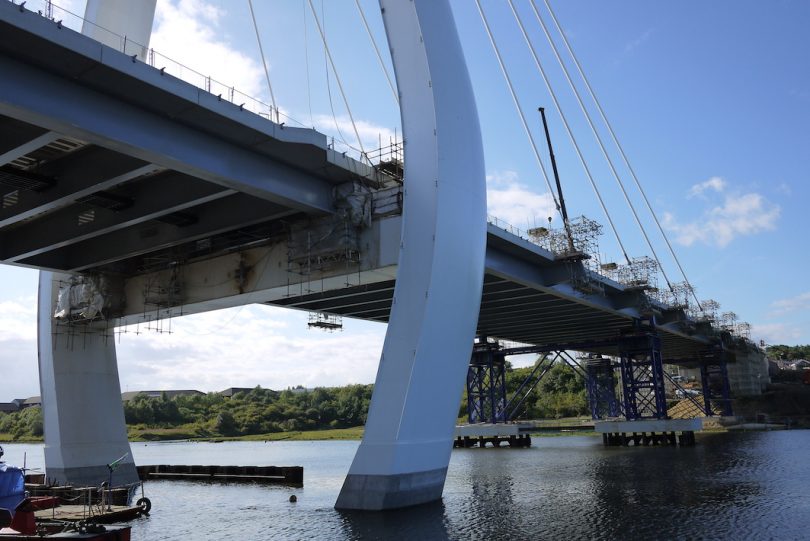 One of the most visible elements of the construction process for the New Wear Crossing in Sunderland will be disappearing shortly – opening up another view of the city’s new bridge.

The cofferdam, which is a giant steel box in the middle of the River Wear that has provided a dry area for the team to build the main bridge foundations from, is slowly being dismantled and is expected to disappear from view from the end of next week (w/c Aug 14).

It will take the expert team of divers from James Fisher Marine Services a total of about three weeks to cut the 30x13m steel box down to riverbed level – exposing the bottom of the 105m pylon legs as they disappear into the water.

Working from a pontoon and using specialist underwater cutting equipment, the team of seven divers is removing the steel sheets in sections – up to 6m at a time – when tidal conditions allow.

With just over half of the cofferdam cut away, the sheet piles are gradually being removed during a carefully orchestrated operation, which is closely monitored by underwater cameras that feed into CCTV screens above water in the dive control room.

Dive Supervisor Alex Wignall, from James Fisher Marine Services, said: “The operation to remove the steel sections of the cofferdam is going well. There are 22 sections to remove in total – some are easier than others – but we are averaging one section a day.

“We have one diver in the water at a time, who is cutting away the steel, with another diver on standby – should he be needed – and a team of people on the pontoon closely monitoring the operation. The cofferdam is quite a size, and we have to work around the tides, so it’s a fairly slow process, but when we lift the sections of steel out of the water you can really appreciate the scale of what we’re doing.”

The dismantling of the cofferdam is the first of the major temporary river works to be removed – signaling a new phase for the New Wear Crossing project as it heads towards completion in the spring of next year.

The bottom of the cofferdam is part of the foundations for the bridge’s impressive A-frame centrepiece. It was made from 92 sheet steel piles that were installed in the river at the start of 2016. Once the box was constructed within the riverbed, the water could be pumped out – providing a dry, watertight space for the team to work from.

Stephen McCaffrey, Project Director for FVB joint venture, created by Farrans Construction and Victor Buyck Steel Construction to build the bridge on behalf of Sunderland City Council, said: “The cofferdam has been an essential part of our engineering infrastructure on site for 18 months – enabling us to work within the river to build the foundations and to create the enormous tusks, or feet, that the pylon now stands on.

“It’s played a major role in the project, but is now no longer needed, so the steel will be taken away and recycled. In a way, it’s a shame to see it go, but it’s a real sign of progress on site.”

The New Wear Crossing is Phase 2 of the Sunderland Strategic Transport Corridor, which aims to improve links between the A19 and Sunderland City Centre and the Port of Sunderland. It is on track to be complete in the spring of next year.

It will cross the River Wear between Castletown and Pallion and will improve transport links around the city, open up land for regeneration along the south side of the river, and help to create jobs.

Sunderland City Council Leader Cllr Paul Watson said: “It’s incredible to think how much effort goes in to creating temporary structures like the cofferdam on big projects like this. It’s been a real privilege to watch the team at work as they have progressed and it’ll be fascinating to see how the bridge looks when we get a clearer view of it across the river, without the cofferdam in place.”

The New Wear Crossing is the first bridge to be built over the River Wear in Sunderland for more than 40 years.