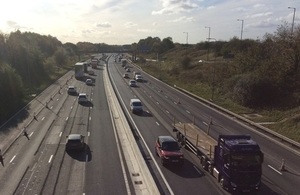 Drivers to benefit from wider lanes on one of the busiest motorways in the region.

Drivers on a 5-mile stretch of the M62 near Rochdale can now benefit from wider lanes, helping to improve the flow of traffic on one of the busiest motorways in the region.

Temporary narrow lanes have been removed between junctions 18 and 20, marking the start of a phased opening of the North West’s first smart motorway scheme to tackle congestion and improve journey times.

The Highways England project will use new technology to provide better information to drivers and variable speed limits to keep traffic moving at a steady speed. Extra lanes will also be opened on the M62 before the Christmas getaway, increasing capacity on the stretch of motorway between Greater Manchester and Yorkshire by a third.

Jon Stokes, Senior Project Manager at Highways England, said: “I’m pleased we’ve been able to remove the temporary narrow lanes on the M62 – benefiting the 180,000 drivers who use the route every day. Nearly 600 people are currently working to complete the smart motorway and we will open each section along the route as soon as possible.

“When the smart motorway is complete, drivers will be able to travel in an extra lane on the M62 and variable speed limits will help to keep traffic flowing – tackling the stop/start conditions and tailbacks caused by sudden braking.”

Overnight closures will continue to take place between junctions 18 and 20 on the M62 to carry out resurfacing work and to commission the new smart motorway technology.

The closures will be in place between 10pm and 6am, Sunday to Thursday, and between 9pm and 10am on Friday and Saturday nights. Overnight closures will also continue on sections of the M60 for major construction work on the smart motorway.

The scheme is Highways England’s most complex smart motorway project, affecting the second busiest motorway in the country and covering 13 junctions – an average of one junction every 1.4 miles.

The full scheme stretches between junction 8 of the M60 near Sale and junction 20 of the M62 near Rochdale. The next stage of the phased opening will see the removal of the temporary narrow lanes between junctions 8 and 10 on the M60 later in the autumn.

The new technology will be tested to ensure the 100 traffic sensors which have been installed along the 17-mile route are working effectively, before the new electronic variable speed limit signs are switched on from junctions 8 to 10 on the M60 and junctions 18 to 20 on the M62 by the end of the year.

When the smart motorway is complete, traffic sensors will automatically monitor the flow of traffic and adjust the speed limit accordingly. A total of 50 CCTV cameras will also provide 100% coverage of the route, and allow Highways England’s traffic officers and the emergency services to respond quickly to incidents.