A major project to create a unique and modern office environment in Ukraine has been completed. The new space is for Inspe, a company that specialises in the sale of dental equipment and as such the majority of clients who visit the building are dentists. The new design, however, is fundamentally different to typical interiors found in medical facilities.

This deviation from the norm has resulted in an environment that is both comfortable and elegant. More recently, the Inspe Office received global recognition with a SBID award nomination in the ‘Office Design Finalist’ category.

Located in the western Ukraine city of Lviv, the design of Inspe Office was created by local design practice Replus Design Bureau. Working from September 2016 to April 2017, the project involved changes to both the interior and exterior of the 1970s Soviet building. In total the size of the office is 305 sq ft across the basement and first floor of the building.

Beginning outside, the office façade is used delicately, without attracting too much attention to the building and destroying its existing structure. In a subtle nod to the past, the stucco on the façade was made using an old recipe. Internally, the space was opened out and the windows lowered with indirect lighting used to illuminate the space. For the sake of acoustic comfort on the fragments of the ceiling, there are islands of perforated dry wall.

Exposed brickwork is prevalent throughout the space and creates an industrial, urban feel that is bold yet comfortable. Metallic elements, planting and artistic graffiti were all used to decorate the interior.

Despite a number of challenges along the way, including difficulties of low elevation and a short build time, the project was completed on time to the high standard required.

“This project was very important to us because we wanted to break the stereotype. Inspe has been working in this building for more than 15 years. The main type of activity is the sale of dental equipment and the main clients who visit this room are dentists so we wanted to make a space which is fundamentally different from the stereotyped vision of medical interiors.

“The fact that we got to the final of the SBID International Design Awards shows that we are on the right track and that we should never give up.” 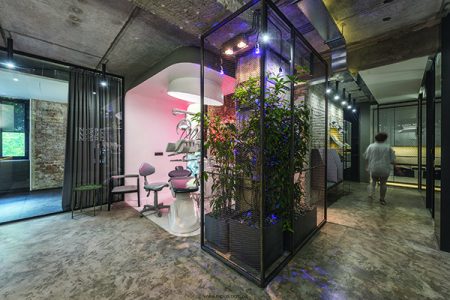