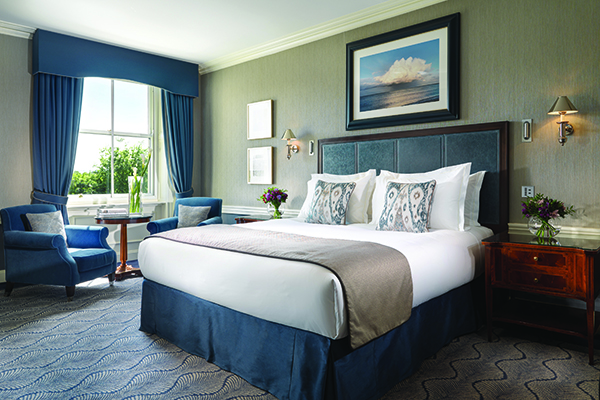 Guy Oliver, principal designer and owner of Oliver Laws, the established London design company, has focused on creating an atmosphere in each Heritage room to evoke a particular sense of Irishness. Using a subtle blend of colour, texture, cultural reference and art, these rooms and suites are comfortable and contemporary, but strongly grounded in a scheme that complements the traditional nature of The Shelbourne and quietly reflects its national and historical importance.

Renowned for his work on many historic properties in London and around the world, including Claridge’s, The Connaught and Number 10 Downing Street, and with an Irish ancestral background himself, Guy Oliver was, as always with his design projects, very conscious to use local suppliers and manufacturers in The Shelbourne wherever possible.

Many of the furnishings and fittings selected for The Shelbourne Heritage suites and park view rooms have been designed, crafted or sourced in Ireland, including exquisite Waterford Crystal chandeliers, bespoke furniture, contemporary Celtic-themed embroidered curtains, and a collection of contemporary photography by Irish artist and photographer David Farrell.

With marble chimneypieces and antique mirrors in the lounge area, some with window seats overlooking St. Stephen’s Green, the Heritage Suites also have marble bathrooms, and each room and suite has Irish ephemera and artworks, often drawn from the hotel’s own archive collection.

The Princess Grace Suite boasts historical artwork including two landscape oil paintings and a suite of prints by John Leech.  In addition to an antique dining table from Fennelly Antiques in Dublin, which also provided a number of the antique over-mantle mirrors in this suite and many others, the suite features other antique pieces including side tables, master bed frame and French chairs alongside a bureau plat or writing table in the drawing room, which was rescued and restored from the hotel’s own antique furniture collection. 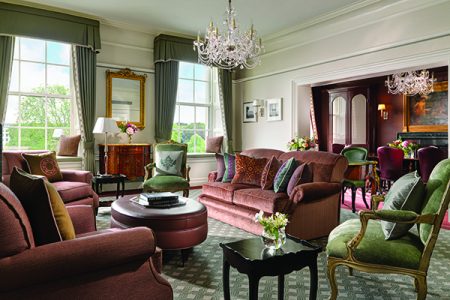 Every detail of the refurbishment has been thoughtfully and respectfully considered by Guy Oliver and his team including the grand corridors, which have been made brighter and are filled with Irish artwork that depicts scenes of Irish life, architecture and landscape.

The Grand Staircase, also newly restored, is now exactly that – truly grand. It is the star feature of the hotel, redesigned and redecorated in the manner of important buildings of the same period. The four tiers of windows on the Grand Staircase will feature, once completed, the crests of each of the 32 counties of Ireland, with each tier representing a province – Ulster, Connacht, Leinster and Munster.

This handsome refit of The Shelbourne’s Heritage rooms and suites brings the overall multi-million euro guest room refurbishment of Dublin’s favourite five-star hotel to a close, with all of the bedrooms lavishly reappointed, as well as the magnificent restoration of the hotel’s 193-year old historic façade.

Since opening in 1824, the Shelbourne Hotel Dublin has been a symbol of timeless elegance and the understated luxury of Irish art-de-vivre. Magnificently situated overlooking St. Stephen’s Green, the city’s grandest square, and only footsteps away from Dublin’s most famous landmarks.  For the past two generations, Royalty, statesmen, artists, writers and legends of stage and screen have made it their home away from home. From Princess Grace of Monaco to Gabriel Byrne, from Brendan Behan to Bono, from James Joyce to John F. Kennedy, they have all played their part in contributing to the illustrious history of the hotel. 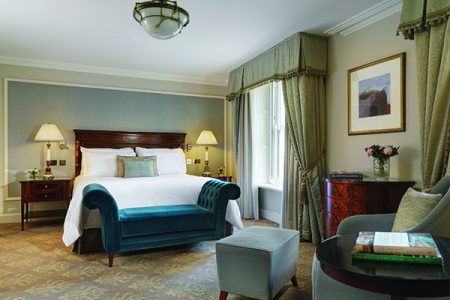