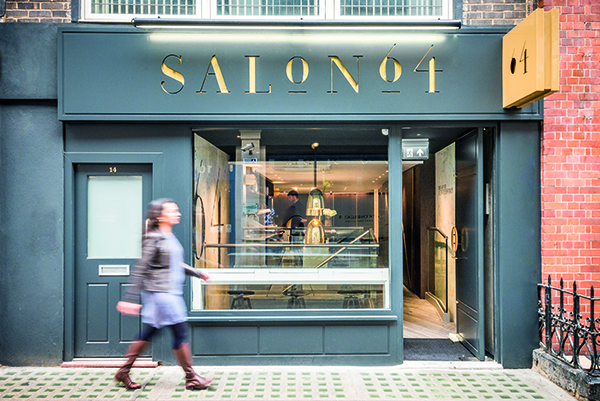 An inspirational new concept within the beauty industry, Salon64 in Soho introduces the salon as a dynamic social and intellectual hub – rather than simply a place for hair and other beauty treatments.

Situated in a central location, off Dean Street, in the old French quarter, Salon64 comprises a total of 153 sq m spread over two floors, with the 91 sq m basement level being the largest space.

Leading hair stylist Ricky Walters is behind the new venture designed for London’s socialites, where transformative design has shaped a luxurious multi-functional space, connecting hair styling and beauty with a social experience.

Designed by award-winning architects and designers JaK Studio, working with Dawnvale as main contractors, Salon64 was imagined with the traditional French salon in mind.

A product of The Enlightenment era, the original salons played a central role in society, providing both men and women with a place to gather to refine taste and inspire intellectual conversations around art, fashion and popular topics of the day.

This served as the original driver behind the design and interiors creating a space for socialites of today.

JaK Studio wanted to inspire the art of conversation by creating transformative spaces.

The ‘Fire Pit’ is the magnum opus of the design. It features bespoke ‘jewellery boxes’ designed to create a sense of comfort and ease. 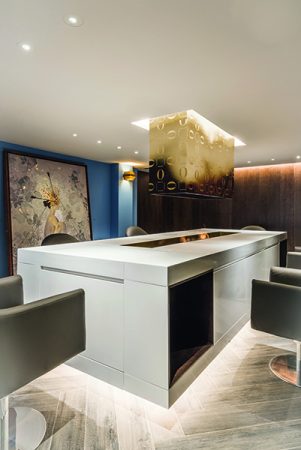 These opulent boxes open up from the table tops surrounding a central fire pit, and revealing several compartments; one for the hair stylist’s tools, a charging station for personal devices, a space to keep jewellery safe while having hair and beauty treatments and a general space for magazines and drinks.

Inside the top of the box is a mirror with adjustable lighting to suit the customer.

Ricardo Alba Gonzalez, Project Architect, JaK Studio said: “The concept of Salon64 is centred around the art of conversation, and the creative process in making the jewellery boxes was a constant conversation between us and Ricky Walters. It is very gratifying to see how design has enabled the experience that allows the customer to be part of the space.”

The venue also features a bar which doubles up as a traditional champagne bar as well as a blow dry bar, and a front lounge which receives customers in an intimate setting encouraging tête-à-têtes.

Other design elements include a coffee shop with a signature blend, a closed off washroom, private treatment room, a library of inspiration, and a colouring lab.

Ricardo Alba Gonzalez said: “The idea of the fire as a central element was key to creating a luxurious and tranquil vibe, making everything revolve around these elements to promote and encourage conversation – as opposed to traditional salon design in which clients are usually facing a mirror hanging on a wall with little room for interaction.

“It’s in these main areas where lies most of the activity of the salon, acting as a buzzing hub where everybody can find their place to enjoy either in tranquil isolation or engaging in active socialising with friends.”

The luxurious and modern interior also embraces materials such as oversized herringbone floors, a regal blue colour scheme and golden brash details with a modern take on the roman numerals 64 reflected in the tapestry. 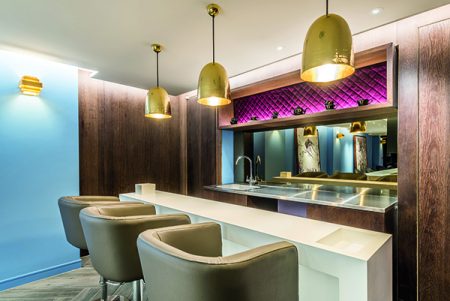 Ricardo Alba Gonzalez concluded: “This project presented many challenges – from the prototyping of the ‘jewellery box’ concept (which took us several attempts to get completely right), to the design of the salon’s bespoke and unique washing troughs – not to mention more technical elements such as the installation of air conditioning and air extraction – all of which we managed to happily resolve.

“Our main goal as a practice is working with the client as much as we can in order to deliver a project that meets their expectations – with this project benefiting from a particularly fruitful and intense dialogue between us to achieve the desired result. Throughout the project our client has been aware how the end product is going to look, since we all worked closely from the very beginning. But it’s a pleasure to say that he is very happy with the result.”

Jacob Low, Founding Partner, JaK Studio said: “Salon64 reinvigorates the salon world by taking a classic concept and combining it with modern materials, acknowledging that we socialise through shared experiences. The design is tailored around this concept.”