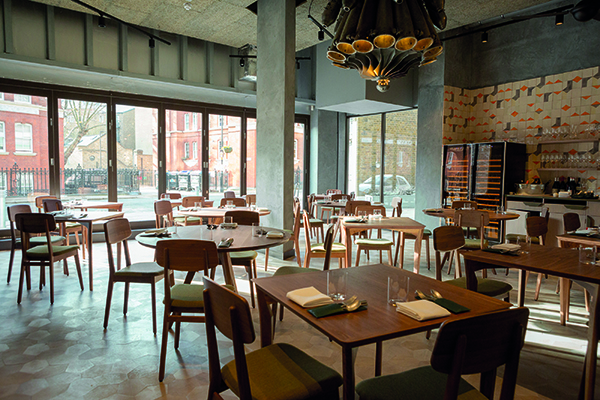 Having built a strong following across London thanks to a number of hugely successful pop-up stints, Chef Leandro Carreira is settling down with his first permanent, solo venture. Londrino will open its doors to the public in December 2017 boasting a menu and an atmosphere inspired by Chef Leandro’s Portuguese roots.

Located in the Snowsfield Yard development in London Bridge, the project is a collaboration between Leandro and Unlisted Collection owner Peng Loh. Londrino will build on ideas developed and tested by Leandro at his popular pop-up venues over the last few years. The menu, while featuring a number of dishes with Portuguese roots, will be an evolving entity that reflects a variety of flavours and influences. Alongside the sumptuous food offering is a wine list featuring lesser known producers from Portugal and the rest of Europe.

Award-winning practice RARE architecture was tasked with transforming a large, empty unit into a warm and comfortable space that complements the food and drink offering. Included within this was the implementation of the all practical elements such as a kitchen, storage and plant facilities. Director Nathalie Rozencwajg spoke to Premier Hospitality about the work:

“We have a long history of collaboration with the client. We worked on the Town Hall Hotel with them in Bethnal Green which was a refurbishment of a former town hall into a five star hotel. This also included a fine dining restaurant, called Viajante at the time, and the Sous chef was Leandro Carreiras.

“It’s quite a complex site in the sense that it’s a very big space, with partially separated areas and it didn’t have much character. The added complexity was that we had to include all the plant equipment within this space.

“We had quite a bit of time to develop the design with the client and Chef Leandro. What inspired us a lot was his Portuguese background so, for example, we used tiles that were handmade in Portugal. His food is very refined yet simple and makes you feel comfortable. It has a delicacy together with simplicity and a roughness and the design reflects this. We kept some of the rough elements of the space like the concrete and the high ceilings but matched it with refined material like the tiles and a beautiful wooden floor.

The first task was to resolve how a kitchen and all the other technical elements would best fit into the space. A mezzanine level, for example, was created for storage and back of house. Once this functional aspect had been achieved work could then begin on creating a story and giving the space character. Nathalie continued:

“The actual restaurant is composed of three spaces and an open kitchen sits in the middle and is visible wherever you sit. Two of the areas are dedicated to the restaurant and the third is the bar, which has a slightly different atmosphere but overall there’s a common language throughout.

“It was lovely to work with Chef Leandro and his team. The client is always crucial to the outcome of a project and working with him was a pleasure. We had real freedom to suggest ideas and it was great to do something you don’t find elsewhere.” 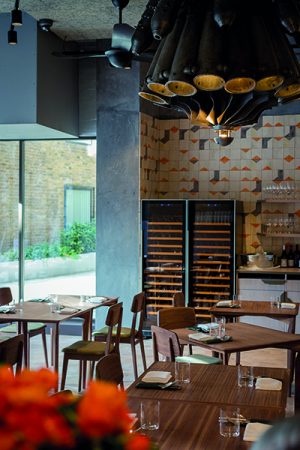 Bohemian Works is a leading crafter and manufacturer, specialising in all aspects of woodwork. The company has been in operation since 2005 and produces a wide range of products, including parquet floorboards, intricate panelling and custom-made furniture.

All products are manufactured to meet the specific requirements of customers, with meticulous attention to detail and quality throughout. Bohemian Works’ state-of-the-art production facilities are located in Pilzen, a region of Bohemia known for the craftsmanship of its carpenters and the company can offer high-end projects in countries with a less strong woodworking culture.

Over the past 12 years, Bohemian Works has delivered projects for a wealth of prestigious schemes including various 5 star family-owned hotel groups, Bergdorf Goodman NYC and numerous private houses all over Europe. Most recently, Bohemian Works has been involved in the Londrino project.

“We valued our involvement on this project – this is what we do and we enjoy the challenge of overcoming complicated solid wood carpentry.”